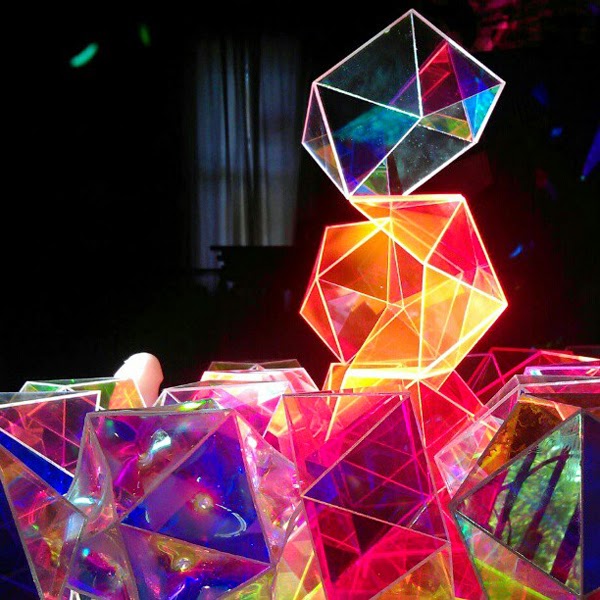 
One of my favorite quotes from the movie Shrek goes like this: 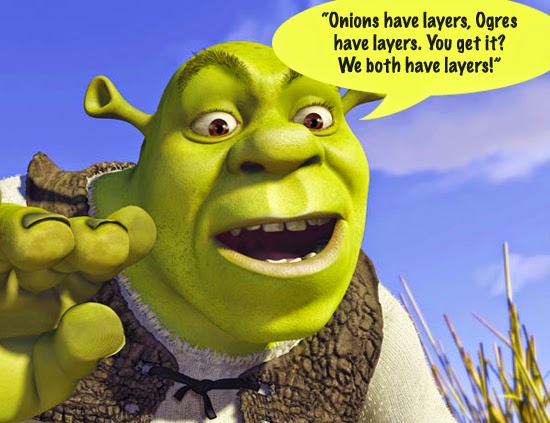 The magical workings that I perform have many layers of prismatic energy structures, one on top of the other, arranged from the foundation to the most intricate final pieces. Because I work with a vortex energy container I can build up these layers over time instead of having to do it all in one evening’s working. I have previously written about the vortex and its qualities, and you can find that article here.

The vortex allows me to perform a working in parts and thereby build up the complete structure in stages so that it achieves the final climactic working at precisely the right moment. That might take a whole weekend, or it might take a few weeks in a row. This characteristic allows me to carefully build up an overall working and focus on a strategic stage that is one of several parts of it. The result is an accumulation of all of the previous workings integrated into a holistic composition of prismatic energy structures, symbolic meanings, themes and occult ideals. Magical formulas are used to tie and bind all of the disparate parts together functioning like matching seams, uniting both the individual sections performed at a single night’s working as well as the overall working that spans days or even weeks.

As far as I am aware the use of the vortex and the unification of layers and stages of a magical working are unique methods. Even so, I didn’t invent this ritual technique from nothing. I did use other ritual examples as the model for this technique and evolved it over time. The source model for this kind of magic can be found in the Golden Dawn ritual for the Rose Cross and the formula for LVX. This was a simple rendition used in a specific ritual instance that I experimented with so many years ago, and I discovered that it could be integrated into any ritual and used to unite all of the parts. It functions as a kind of summary or recap that recapitulates the whole ritual in a simple formula. Yet studying that original Golden Ritual I came up with a more complex hybrid technique that I use today. It allows me to have many levels or layers to a ritual complex, but it integrates the various parts into a whole structure. Without it, the layers would easily become disassociated and break down into distinct processes separate from the holistic working.

While the vortex functions as a centralized container that holds all of the layers together, the various formulas at each stage, and the grand formula at the end ties everything together and fosters a powerful singularity of energy that functions as the overall core of the ritual working. I have presented this methodology in greater detail in two previous articles posted in November of 2010, and you can find them here, and here.

However, allow me to quote a couple of paragraphs from the second part of that two-part article on Sacred Geometry in the Energy Theory of Magick, which succinctly (although a bit redundantly) describes what the magical formula does when deployed in a magical ritual.

“Formula letters are specifically used to pull the points of the ritual structure together at the terminus or ending of that magickal event. This is done in a process that is called “Analysis of the Keyword” as found in the Golden Dawn ritual of the Rose Cross. Therefore, the formula letters (often in Hebrew, but also represented by Greek, Latin, Coptic or Arabic) are used to build the keyword, which acts as the touchstone for the entire ritual structure. How this is done is that the letters of the keyword are intoned at the associated points in the magick circle, along with the devices, declarations, signs (gestures) and visualized colored energies, and then when the ritual structure is complete, the formula letters are intoned together to form the keyword and a final declaration is made in the center of the magick circle.

In this manner, all of the points of the ritual structure are fused into a single keyword and a single declaration. The analysis of the keyword construct can be performed at the end of each ritual structure, and it can be performed at the end of the final ritual structure in a functional ritual. By establishing a synopsis of the fully functional ritual and the ritual structures that are contained by it, a powerful resonance of union and fusion is produced, representing the perfect expression of Spirit within a ritual magickal construct. Having this element throughout a ritual causes a subtle emulation of the spiritual essence of the godhead to be manifest in the working. This factor will ensure that the rite produces a transformative effect when it is performed. ”

I might also add that the formula employs the Qabalistic method of Notaricon, which is used to generate and explode formula acronyms. I can also use the method whereby the letters of a formula are matched against specific Tarot cards and also Pathways on the Tree of Life. Of course, I have to comparatively create analogues for the Hebrew letters if the formula happens to be based on a language other than Hebrew, such as Greek, Coptic, Arabic or Latin.

Anyway, all of these various structures that I employ in the creation of a ritual working function as mechanisms to express and establish energies structures and also to integrate all of these various structures into a seamless whole. It might seem very complex and even cumbersome at first glance, but when breaking any of my rituals down to their essential structure and associated elements, it is actually quite simple, elegant and efficient. A magician can expand such a ritual so that there is quite a bit of declarative verbiage that has to be expressed, or it can be kept to a minimum so that the ritual actions and expression are emphasized instead. It really comes down to the tastes and esthetics of the magician who is authoring the rite. Some magicians are minimalists and others are quite verbose, and still others like to establish a balance between these two extremes so that others may participate in the ritual and not miss any of the subtle and important meanings and significance expressed with it.Too little verbiage makes a ritual cryptic and idiosyncratic, and too much verbiage makes a ritual lifeless, dull and exceedingly boring.

However, there is also an element of the sacred that is an important and strategic part of my more elaborate and ordeal based magical workings. How I employ the sacred in my workings, besides the obligatory assumption of Godhead, is to build a very special sacral magical foundation into every important and strategic magical working. This is done whenever I employ the magical mass to energize, empower and sacralize the working. Immediately after I perform the circle consecration rite, I will perform a magical mass (to generate sacraments and partake of communion) and then I will perform a kind of simple benediction rite, placing charged and consecrated host fragments to the eight nodes of the magic circle and the central altar. What this does is to consecrate, sacralize and greatly empower the magical environment. I call this basic foundation the Magical Eclesia or Sacred Magical Domain.

The established magical circle will contain the sacred power generated by the mass, and the very magic circle will be charged with the holy sacrament, making it inviolable. It also ensures that the magical working that is performed within that sacred container is blessed and sanctioned by the holy spirit and the various deities functioning through the media of the magical mass. Therefore, the magical mass rite has to be associated with a specific pantheon, and it must also focus on a specific godhead within that pantheon that represents the sacrificed deity. The reason why there has to be a sacrificed godhead is that such a deity then becomes the embodiment of the sacramental wine and bread, and without such a deity attribute the whole mechanism of the mass is invalid. Perhaps this explains why the Christian church glorified the crucified savior and made it central to the mass communion rite, since the emphasizing the Roman method of executing a seditious prisoner seems so odd to outsiders. However, in the context of the mass communion rite it makes perfect sense.

So the theme and pantheon associated with the magical mass sets the entire spiritual tone for the magical working. If the theme happens to be gnostic, then the spiritual entities and forces will be related to a specific system of gnosis. This is also true if the theme is pagan, theosophical, thelemic, Enochian or related to some other spiritual-magical system. However, when I use the term gnosis, what I am really referring to is the process whereby a person directly and intimately encounters Spirit in whatever form it is perceived and sensed. This encounter with Spirit is important because it reinforces the magician connection with the Godhead and also opens up the world of spirit for magical operations.

This technique of using sacraments to perform feats of magic isn’t new, since it was until recently an important trope of the Catholic church. In fact, I picked up the idea from both Michael Bertiaux and Bill Schnoebelen, and I suspect that while Michael merely talked about it, Bill was the one who actually made use of it. What I did was greatly expand on the idea and incorporated it into the core rituals for the intermediate and advanced magical systems of the Order. I can also recall that Stephen Hoeller reacted with outright horror so many years ago when I told him exactly what I was doing when performing a mass. While other traditions, including the Catholic, approach the mass as a central rite and vehicle for maintaining a tangible connection with the espoused spiritual pantheon, I have advocated using the mass as a purely magical generator of power, and secondarily as a media for spiritual communion. I believe that my approach to the mass is rather unique amongst the adherents of the Western Mystery tradition. It is also likely that my approach would be mildly shunned or outright condemned by the other traditions.

Unfortunately, I have written only a couple of articles on the topic of the magical mass and the use of sacraments in magic, as well as magical relics and reliquaries. I have two articles that I wrote for members of my Order, but these have not yet been released in their current form to the public. Therefore, the two articles that I have posted to my blog will have to suffice in giving my readers a general overview to the topic of performing a magical mass and using the sacraments to empower one’s magical rituals, and you can find them here, and here. At some time in the future I will endeavor to publish the other two articles, probably along with the material associated with invocation and evocation.

The Magical Eclesia is the sacramental foundation for all magical ordeals and the practice of higher invocations and evocations in the Order. The use of the wine and host to initiate the quickening process of spirit manifestation is built into the rites of invocation and evocation as practiced in the Order of the Gnostic Star. Combined with the vortex and other specific magical techniques, the Magical Eclesia produces a profound and transformative impact on the ritual workings layered through it, generating an occult process whereby thoughts become symbolic form and symbolic form becomes spiritual manifestation. Using such a mechanism as the Eclesia allows the powerful fusion of the energy techniques of magick to merge hostically with the spirit techniques of magick, producing a hybrid that is greater than either one alone.