Some Thoughts About the Abramelin Lunar Ordeal

It is now sixty days since I completed the Abramelin Lunar Ordeal, and I am still waiting to perform the last piece, which is the Bornless One Envisioning rite. I celebrated a very powerful Full Moon rite the previous evening and not only received further insights into this working, but also was able to reconnect to the previous ritual structures and their impressions. The temple still powerfully resonates with the achievement of that amazing ordeal, since the base ritual structures consisted of vortices, which in their sealed state retain all of the energies and intelligences that were raised during the seven week working. I only have to consecrate the space and say a Mass of the Goddess in order to experience harmonic resonances emanating from the sealed ritual structures. I am not yet ready to unseal these structures and continue with this ordeal, yet the information that I have received last night would seem to substantiate that pause.

I also wanted to tie some loose ends up and share with you a new rendering of the picture of Seraphiel that I drew probably some time in December 1972. My friend and associate, Rekhetra, produced this art work based on the original colored drawing that I did so long ago. It looks much more vibrant and interesting, having been redone by an accomplished artist. You can see more of her artwork here. 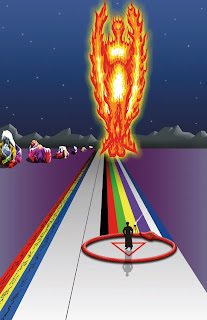 Since I completed the primary ordeal in December, there has been a lot of internal processing going on, but only some outward indications that I am making some definitive progress towards my ultimate goal of at-one-ment with the Godhead as the Unity of All Being. I believe that this process will be slow and evolving, with some intermittent but astonishing breakthroughs occurring over time. As all of the super-archangels seem to have said to me, this is not the end of my spiritual path nor even the ultimate goal - it is merely the beginning of a more advanced and empowered stage.

One thing that is occurring with me that seems very clear is that I am pulling all of the very powerful and strategic threads of my past together into a mosaic of the present. In order for me to determine the nature of the my destiny, I must know where I have been and why. I must understand my own story in an intimate and magickal manner so that I may realize the hidden forces that compelled me through my life’s spiritual process. So far, the most compelling parts of my life are what happened in 1972 and 1973, representing when I established the foundation for the magick that I work today.

While the techniques that I use to assemble my ritual lore were developed during the 1980's and 1990's, my actual beginnings occurred in the previous decade. Parts of my life’s story have resurfaced after many years of neglect and forgetfulness, undoubtably due to the impact of the Abramelin Lunar Ordeal. A friend of mine confided to me that the Abramelin ordeal is not a working that can be resolved just by performing the required actions and observances for the required period. Often, the ordeal does nothing more than powerfully facilitate and impact the internal spirit of the magician when it is completed, while the other facets of the process may take months or years to finally achieve full realization and mastery. He also told me that in order to know one’s ultimate destiny, one must first have complete recourse and understanding of the past. The past is the key to the future, so this is why I have become so haunted by occurrences that happened over thirty years ago.

Last night (February 28) was a strikingly beautiful full moon that mystically reflected on the ice and snow, it created a vista of soft brilliance, since it was a cloudless night. The moon turned the evening’s darkness into a spectral landscape that seemed almost a dim reflection of a brilliant day. One could have easily navigated without any illumination whatsoever. In this mysterious and wondrous night I performed the Mass of the Goddess and sought to reconnect to that magickal ordeal completed two lunar cycles previously. I not only succeeded in reconnecting, but I was amazed at how potent the atmosphere of the temple was after all of that time. I was able to sense a connection with all four of the Seraphim, Cherubim, the Element Godhead of Water and my HGA/Higher Self. All of these spiritual entities are very much alive and fully active in the temple, waiting for me to engage in further action.

What I received from this melange of spirits was that I will need to perform two more iterations of the Bornless One invocation rite, but not until my greater wheel of fortune moves from being retrograde to going direct. This won’t happen until July, so any future workings will have to wait at least until then, and more likely the following autumn. I must also continue to work on pulling the most important parts of my past out of my living memories and weave them into a unified expression of who I am and where I have been. This is the required foundation for determining the nature of my personal spiritual destiny. I believe that I will have to perform the Bornless One invocation rite once to establish this baseline of my present lifeline, and then start to work on projecting it forward into the future. This action will produce many visions and begin to break up my present time line, allowing me to perceive and project a future destiny that I will be able to unerringly follow. Once that future is fully visualized, I will perform the Bornless One invocation rite for the final time.

That is what was communicated to me last night and I believe there is much to ponder and think about. I have never been much for believing in any kind of predestination or being tied down to a fixed future, so I will also have to think rather deeply about how one can project a future destiny and still retain a high degree of flexibility. Since it is probably impossible to collapse causality, I still may be able to build the rest of my life into an ideal by consistently following an empowered spiritual plan. Sort of like living a self-fulfilled prophecy. That doesn’t mean that I will be immune from accidents or any other kind of unexpected occurrences, but that such occurrences will neither deter me from my ultimate goal nor obstruct my path in any manner. Even death will not deter me, since it will only hasten and complete the overall process of my life. Thus I will achieve my goal of obtaining union with my Godhead no matter what happens in the future. If I leave behind a legacy of enough teachings, rituals and lore, then others will not only be able to know what I did and how I got there, but they will be greatly aided in erecting their own spiritual apotheosis. Both tasks represent my true will, so whatever happens to me, both tasks will be accomplished, whether I complete all of my writings and teachings or not.

I was quite pleased and very happy with the results of my simple magickal workings the prior evening. There is so much more to come, and I look forward to it. I also look forward to sharing some of this knowledge with you, my readers, as well.
Frater Barrabbas
Posted by Frater.Barrabbas at 8:28 PM