Magick and the Art of Self-Deception 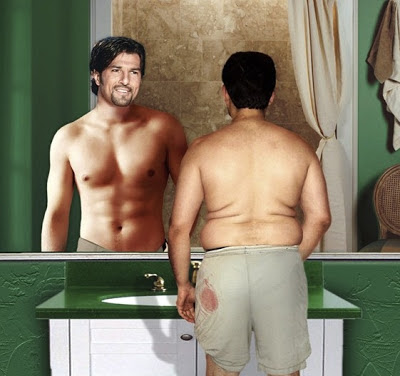 “There is nothing more insidious, in my opinion, that can happen to anyone who is a magical practitioner other than wholly believing in their own PR.” - quote from Frater Barrabbas Tiresius

We all tell stories to our friends and families about ourselves and our experiences, but much of those tales are a mixture of fiction and fact. Sometimes the quantity of those facts are greater in proportion to the amount of fiction and sometimes it is quite the reverse, where only a smidgen of fact can be found with a lot of fiction. I guess it’s human nature to tell tales, and often they are humorous anecdotes about our lives and personal experiences. This process of telling and retelling tales about ourselves and our experiences is probably one of the most important factors for maintaining a long term memory. It also has a powerful social effect, either elevating or making more human (and accessible), the various episodes of our lives.

Magicians are no different when it comes to telling tales about themselves and their exploits, and I usually refer to these magical tales as “Tales of Power,” with a very brief nod to Carlos Castaneda. Sometimes a magician will embellish his tales and other times he will edit out the more revealing or embarrassing occurrences. Magicians who are trying to sell themselves as teachers, writers or magical consultants will often assemble an array of tales and exploits that depict them in a certain competent and alluring fashion, omitting those times when their magic went awry or failed altogether.

This aggregate of tales, adventures and exploits often build up a public persona that the magician uses as a marketing device. There’s nothing wrong with any of these activities, and they seem to be vested in the very nature of what it is to be human. The problem arises when magicians begin to believe that all of the tales and hype that they have put out about themselves are completely true. When a magician forgets who he or she really is, then problems will naturally arise. Delusion is a magician’s curse, and believing in your own public relations dossier is one large step down a very slipper slope. This is why I wrote an article many months ago explaining that I am a real person behind the pen-name and occult personality of Frater Barrabbas, and that I am not Frater Barrabbas.

In order to practice ritual or ceremonial magick in a competent manner, the operator must adopt a magical personality, also known as a “persona.” This process begins with the adoption of a magical name and motto, and then builds up to include one’s accomplishments and spiritual alignments. This magical persona becomes something of a fictional being, founded on the reality of the actual training and expertise that the magician has achieved, but also based on an initiatory pedigree and backed up by an association with various deities.

Some magician collect certain jewelry, robes and vestments, and even go so far as to wearing masks, makeup and assuming a specialized personality. Others like to collect initiation pedigrees from many different organizations to burnish their magical reputation, or just brag excessively about some of their accomplishments. After a while, a magician can notice the very shift in his personality when entering into that persona to either work magic or function as a public magician. My lady, Grace, can pretty much tell when I am in my mode as Frater Barrabbas instead of the real person that I am, and sometimes she delights in letting me know when the occult baloney factor is getting rather deep. Some of my close friends also let me know when the persona of Frater Barrabbas is getting a bit overbearing or interfering with a true social exchange. This was more of a problem in the past, but it still occurs from time to time.

Therefore, I have learned to function typically as a low key individual without any of the magical bombast when behaving as the normal middle aged man that I truly am, and to deliberately avoid being turned “on” unless my role as a magician requires it. This is also why I disguise my real name and identity from that of my magical persona so I can at least distinguish between them. I am certain that other magicians have this issue to deal with and have dealt with it each in their own different manner. A similar phenomenon can also afflict actors and especially comedians, but it also haunts magicians who have a larger than life magical persona.

So, a magician must balance the use of her persona and its importance in magical workings and function as a real person in a world that is polarized by the sacred and the profane. Keeping a certain degree of humility and objectivity is very important, and also knowing when one is operating through the magical persona and maintaining that function in its proper social context. It’s OK for me to be Frater Barrabbas when teaching, working magic or initiating others. It is bad form if I act through the Frater Barrabbas persona in normal social settings, or even all of the time and somehow confuse that persona with my real self. However, when I operate in a social or magical setting as Frater Barrabbas, there is also the human element that I make certain is always maintained. I may assume, for a brief moment, the vista of my Deity, but I am still a mortal human being with all of the associated flaws and limitations, including and especially, mortality.

Speaking of the real person, while I may have successfully achieved quite a bit of what possibly could be considered extraordinary magical operations, I have also profoundly failed at others and my overall progress over the decades has been a struggle with my own flaws, personal bad habits, delusions and misunderstandings. I am also getting older every year, and sometimes I wonder if I am getting any wiser? What does seem to be my ultimate fate is old age, enfeeblement and finally, death - just like everyone else. Whether I will be remembered as anyone of influence or importance is highly debatable, despite what I might state when I am pimping my magical persona to the public.

My life has been a series of follies and foibles, and at times I seem to be more like Don Quixote than Dr. Strange, chasing after delusions and passionately promoting fallacies. What I have learned over the many years of life is to laugh at my foibles and to make light of them for others to enjoy as well. If I can’t be the sorcerer supreme, I will at least be one of the better jesters in that court. And, as Lon Milo Duquette has proved time and again (and I am in perfect agreement with this sentiment), there’s really no fool like an old fool.

The key to maintaining balance, grace and sincerity in life’s eternal juggle of the sacred and the profane is, of course, humility, objectivity, flexibility and an open mind. I might be a magician, but I am also just a man with certain virtues and obvious flaws. As the cartoon character Popeye the Sailor Man says (all too often): “I am what I am, and that’s all that I am!” So don’t buy too heavily into your own PR, and keep your magical tales of power sprinkled with some tales of personal folly and human weakness.