Sympathy for the Devil in Witchcraft? 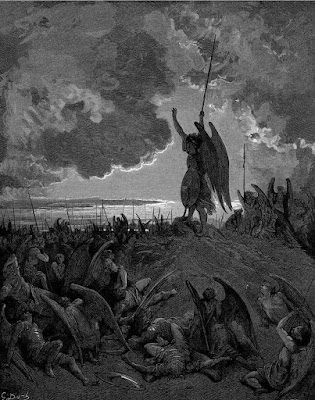 I wanted to hold back and really think about the controversy linking Satan and the Horned God of the Witches as being somehow intrinsically related. I have listened to what others have said, and I have also had some interesting conversations with some of my peers. After digesting these various opinions and ideas, I feel that I now have pulled together my own thoughts about this controversy. What follows is how I perceive this issue.

Recently, there was an article in Patheos, written by Pat Mosely, that proposed Wiccans should reconsider incorporating the Devil into its Duo-theological framework, or at the very least, consider the tropes of the Devil in history and how it could relate to modern Witchcraft. You can find that article here. While the article attempts to justify this theme, I found myself unconvinced for a number of reasons. First of all, if the author had said that Modern Witchcraft in at least some of its forms should consider the relationship between the Devil and the Horned God, I would reply that such a thing is already well underway. It's just not occurring in the manner that the author has suggested. Secondly, I think that it is problematic for anyone to suggest that Wicca, or any other Pagan religion, reconsider the Devil as a deity if that particular entity itself doesn’t function as a deity in any other religious system, with exception to Classical Satanism. I find this whole argument to be counter-intuitive, and that is a form of argument that has been overly-used lately, in my opinion.

However, the word “Wicca” was used in the article, and it is a fact that the only individuals who use that word to identify themselves are engaged in the British Traditions of Witchcraft (BTW), as established by G.B. Gardner and continued through myriad offshoots. The problem with this kind of “devil’s advocate” writing is that it just over simplifies what is actually a very complex issue overall. Therefore, to tell the adherents of an existing religion that they should revise their beliefs to suit the whims of a small group of individuals in their semantic whimsy is probably hubris in the extreme. If Modern Wicca has not embraced the Devil by this time in its development then it probably would be silly to suggest it now.

First of all, there is a distinction between Witchcraft and Wicca. One is a magical practice and the other one is a modern Pagan religion. A magical practice is much more flexible and mutable than a religion for obvious reasons, so it has the advantage of being able to examine and engage with various cultural tropes to which a religion couldn’t and wouldn’t engage. (I will address this later in this article.) The other problem is that the concept of the Devil, or Satan as a cultural trope, is far too multifaceted and layered to be able to be resolved into a single deity-like entity. As my brilliant and insightful friend Steve Posch has related to me when I asked him for his opinion about this controversy: “Does the tree equal the particle board that is made from it?”

What Steve meant by this terse statement is that the cultural persona of Satan (in the West) consists of many different elements. Some of them were part of something else originally, and others were invented over time, and all of it is hopelessly fused together into something totally unlike the original sources. We won’t talk about the fact that Satan means one thing in Christianity, another in Judaism, and still another in Islam. However, the mythic image of Satan has changed over time, accumulating many different elements (in many different cultures). It is also something that can’t be extracted from the context where it has its archetypal existence, namely in the Abrahamic religions, to be used in an already established religion. To do this is to create something that has no real link to a polytheistic pagan past or relevancy to Modern Paganism. Also, Satan was never considered a pagan deity, even by those who promoted the idea of this fallen angel as the preeminent adversary in Christian theology. All of this is obvious to many despite certain modern apologists (and Christian fundamentalists) who seem to think that one became the model for the other. This is why the founders of the craft rejected the notion that the principle male deity of their newly established religion had any relationship to Satan. (They were right, as we shall see.)

If you still want to examine all of the myths and underlying sources, as well as the evolving concepts associated with Satan, then I would recommend that you get a copy of Elaine Pagels’ book “The Origin of Satan: How Christians Demonized Jews, Pagans, and Heretics.” I think that you will find it an interesting read, just as I did some years ago when it first came out.

A quick examination of the attributes of the God of the Witches in Modern Witchcraft can readily show that the Horned God has little in common with Satan, other than they are both entities depicted with horns and hooves. The Horned God of Witchcraft is a deity that cyclically dies and is reborn. As an icon of the various wild fauna that represents part of the divinized food stock for human beings, he, of course, dies and is consumed by humans and then is reborn to contribute to the furtherance of life in all its forms. He is the semi-divine-mortal representation of life and death. That which dies is always reborn and what is born must therefore always die. Life gives itself to life so that life can continue. This represents a seamless continuity in which all living things participate, so that humans themselves become food for various plants and animals thereby serving the eternal cycle of life and death.

The God of the Witches is therefore a dying God, and according to a recent article, this Deity is a very recent creation based on very ancient and primordial themes. However, unlike the Devil, the Horned God is a more perfect vehicle for the ancient European concept of the Divine Hunt, and that the Hunter must also be the one hunted at some point in the ever changing cycle of life and death. Does this mythic image in any way relate to the monotheistic concept of the Devil? I think that the more we examine and compare the mythologies of the Horned God and Satan, we will see that they are two completely separate and distinct entities. While there are some similarities, such as the image of Satan being that of a hybridized human and goat, with horns, goat legs and hooves, and a tail, these similarities are probably overly superficial and do not constitute any kind of intrinsic relationship.

Additionally, the mythic concept of the Horned God, although based on ancient elements is a rather new development, a product of modern Pagan revisionism. An article recently written by Jason Mankey for Patheos clearly makes the case that the Horned God of the Witches is a recent invention. He states: “The ancients didn’t have a universal Horned God, what they had were various horned (and antlered) gods who served a variety of needs.” After reading through his article, I find that I agree with his premise. There might be various ancient elements in the Horned God mythos, but it is a new concept fashioned for a specific purpose and function, which is to be the God of the Modern Witches.

This is not to say that the Horned God is the only representation of the Modern God of the Witches. There is also the Sun God, represented as the logical consort of the Moon Goddess, who has the names of Dianus, Apollo, Helios or Lugh (to Diana, Selene, Artemis or Arianrhod). In the 1960's and 70's the Wiccan Sun God was also called Lucifer, but here the Latin “Light Bearer” was used to denote this deity as opposed to equating him with Satan. Other, more obscure comparisons to the Horned God were the Celtic deity Cernunnos and also Herne, the Hunter. The former was chosen because it was an antlered Celtic deity with a limited purview and an unknown character and worship, and the latter because it fit with the mythic theme of the hunter and the hunted in the dance of death and life. All of these comparisons and additions attempted to somehow lend an antique character and pedigree to the Horned God, but it would seem that such attempts must ultimately fail. In the end, what is important and relevant is how this Deity is perceived and worshiped today among those professing an adherence to Modern Witchcraft.

Regarding the practice of Witchcraft as a form of magic, in contradistinction to or included with the Wiccan religion, it is my opinion that individuals and groups will encounter the chthonic roots and aspects of the various Pagan Deities as one engages with and plumbs the depths of the iconic Spirit World. They will also fully experience the impact and affects of the various activated and functioning cultural myths and beliefs. A belief has power in our world as long as people believe in it, and it doesn’t matter if it is valid, authentic or even legitimate. Whatever people believe is going to be found in some manner or form within the cultural and spiritual underworld that we are the inheritors thereof.

While the adherents of the Wiccan religion can ignore the affects and impacts of Satanism, demonolatry or diabolism within our cultural continuum, those who practice magic will have to deal with these various archetypes, themes and cultural tropes at some point in their development. This is already occurring to some degree, and it is relevant because it is an experiential reality in the Spirit World. For those who practice this kind of magic, the issues and considerations that Pat Mosely brought up in his controversial article are relevant, but not in the way that he brought them up. Wiccans, on the other hand, don’t have to sing “Kumbaya” with avowed Satanists of whatever stripe and allow them free access to their mysteries.

However, being cordial, respectful and sensitive to other people’s beliefs should be a hallmark for all Wiccans, since we are all too aware of active prejudice and malice in our present world from those who would brand our faith as immoral, unlawful and heretical. In time, I suspect that Wicca will evolve as a religion and become more differentiated, and this means that there might be traditions or offshoots that espouse and embrace demonolatry and chthonic based practices. However, it can only effectively occur when our religious culture has become less polarized than it is now.

It is, after all, the Joy of Sects, that we are talking about here. (And I enjoy talking dirty about them.)