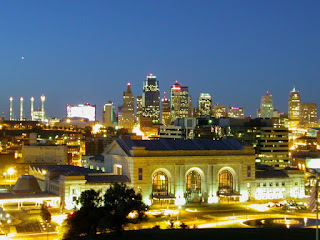 I am in the final preparations today for my departure to the Heartland Pagan Festival 2010 in the Kansas City area. I will be leaving tomorrow morning and won’t return until early next week. So I won’t be writing any blog articles for the duration. This is, happily, a paying gig - one of my first. I am also going to visit some of my friends who I still have some connections with both prior to and immediately following the festival.

Some of you might be wondering why I am going on about Kansas City. I have a lot of history with that area. I have many fond memories for what happened there in those times and there were many important friendships that I started, some of which are still active today. Oddly enough Kansas City was a hotbed of Witchcraft, paganism, ceremonial magick, heathenry and Celtic music and culture. Some of those activities are still going on, even though I have gone since 1989 and have to rely on the anecdotal reports of friends. Kansas City is also where the Order of the Gnostic Star had its birth and origin. There was a functioning temple that survived probably for at least several years after I had departed the town for Atlanta, then Tallahassee. It was a time rich in discoveries and the development of a system of magick that is unique in the arena of the Western Mystery tradition. Much of what was done at that time is still relevant and useful today, so that should show anyone how really important and deep all of that work actually was. Kansas City is a major center for American Jazz and was the birthplace of Charlie Parker.

Kansas City is truly an amazing place. First off, there are two towns - Kansas City located in Missouri, and Kansas City in Kansas. They aren’t separated by much of a geographic barrier, so there are some streets that border both states, where one side of the street is in Missouri and the other side is in Kansas. This was a feature that bootleggers took advantage of back in the 1920's during prohibition, since often jurisdictions began and ended at the state line. Kansas City also boasts that barbeque was invented in that town during the prohibition days, although that may be an urban myth. Kansas City has an amazing blend of old and new, from Crown Center, to the Plaza (modeled on the Alhambra in Spain), the gothic facades of the old train station, to the renovated and ultra-modern buildings of the downtown business section. Kansas City is also supposedly famous for having the largest population of beautiful redheaded women as well. There are places in the town that look nearly like they did back in the twenties and thirties, and other places that have constantly mutated, like the famous West Port area, where some of the buildings actually weathered a massive civil war battle, but whose facade has become something of a trendy tourist trap. I found the people in Kansas City to be friendly, down to earth and very hospitable. Some of the best friends and closest associates that I have ever had in my life were from that locality.

I was relocated to Kansas City as part of a corporate move in 1983, which took me from my native soil in Wisconsin and transplanted me in Missouri. I lived there for six years, and they were probably the move important years of life, since they established my credentials in paganism, witchcraft and ceremonial magick. Those who helped me found the Order of the Gnostic Star were a unique group of individuals. They were brilliant, creative, talented and deeply insightful and I could not have succeeded in building the Order without their help. They gave me a compelling reason to translate my personal magickal system into a system that many could use. That opened me up and forced me to be less insular and spiritually isolated. From that moment on I began to lay the foundation for what would become not only a very successful magickal organization, but also my future as a writer. It was in Kansas City that I began to put together the materials that would eventually become the series “Mastering the Art of Ritual Magick”, since the ritual lore of the order was considered a steep climb for most students. What was needed was a bridge document. I have been writing bridge documents ever since, and I will soon be starting up another project that will attempt to simplify even more my thoughts and practices in the arena of ritual magick.

A lot of lore that was produced, especially after the time when I had moved away from Kansas City, had its origin in the creative sharing of ideas and insights that the Order had established. It is only now, after nearly twenty years, that I am starting to assemble all of the notes and journals on the Enochian system of magick that we produced back in the early nineties. As time moves on and I am able to type up and edit this material, some of it will be made available on this blog for you to read, examine and consider. Eventually, there will be future books that will be produced from this material - but that event is still a few years away. However, I am very pleased to note that I am finally getting a chance to go over all of this material, editing, organizing and bundling it together to form a rich source of new information that has never been seen by anyone outside of the Order.  Yet I owe all of this lore and amazing discoveries to my friends and associates in the town of Kansas City - it was the best of times!

So, next time you are in the south Midwest and you would like to visit a richly diverse place and soak up some history, maybe meet some very friendly folk, I would recommend that you visit Kansas City - both of them.

Also, here is my schedule at the Heartland Pagan Festival - it finally arrived over the weekend.

I’ll let you know how these workshops turn out, how the festival went and perhaps have even a few pictures. If you are attending this festival, feel free to engage me in conversation and ask me for a cup of homemade mead.
Frater Barrabbas
Posted by Frater.Barrabbas at 10:37 AM