The Grove and Outdoor Magick 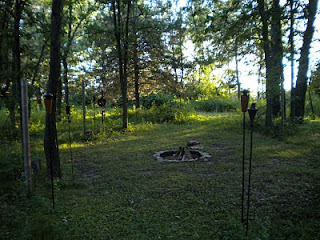 “Have seen dawn and sunset on moors and windy hills
Coming in solemn beauty like slow old tunes of Spain:
I have seen the lady April bringing in the daffodils,
Bringing the springing grass and the soft warm April rain.

I have heard the song of the blossoms and the old chant of the sea,
And seen strange lands from under the arched white sails of ships;
But the loveliest things of beauty God ever has showed to me
Are her voice, and her hair, and eyes, and the dear red curve of her lips.”
Beauty - John Masefield
There is nothing more beautiful, intense, real and meaningful than having an outdoor place to work magick, especially if it is consecrated and maintained over a period of time. I call such a semi-permanent place to work magick out of doors, a Grove, and I am lucky enough to own a three acre section of wooded land that has such a place within it. A grove demands a certain fundamental reality that you won’t find in an indoor temple. A magician who works in a grove is expected to be able to deal effectively with the variables of nature. Trust me when I say that there is nothing more basic or fundamental than that.

However, many witches treat an outdoor grove much as they would treat their indoor temple. This is patently wrong and misguided. Such a notion assumes that there is no difference between a grove and a temple, and to be deadly honest, they are quite different in many ways. So to help some folks to adjust their magickal workings to an outdoor environment so that they can really function within a grove setting, I decided to write an article that articulates the differences between a temple and a grove, and how those differences can make for some exceptional magickal experiences.

When witches assemble to work magick in a temple area, especially if that temple is a temporary affair that is used normally for living space, then one of the first things that they will do is to perform a rite that purifies the area and generates sacred space. Upon that sacred space they will erect a magick circle and set the four wards to the four cardinal directions. Sacred space is generated through the application of the four Elements, where earth and water are the salt and water conjoined to make the lustral water, and incense and fire are joined to make the clouds of incense smoke. Some will even pass a candle to the four directions as an emblem of fire, although that is optional. Yet such a set of actions would very likely be superfluous when defining sacred space outdoors. Why is that? What could be the difference?

The very first assumption that anyone who is a pagan or a witch would make about nature is that it is inherently sacred. So this means that even a suburban yard has a certain quality of sacredness already built into it. When a group assembles in some “secret glade” to do their magickal rites and worship the gods, then that secret glade is already sacred. If it’s already sacred, then what’s the point in aspurging, incensing, laying a magick circle, calling the quarters and setting the four wards. Most of these actions are terribly redundant and unnecessary because the area chosen for magick is already sacred space. In the end, these actions, taken out of context from a temple, only serve to help the group become aware of the sacredness of the space, and that is accomplished poorly because not one person has done anything to attune themselves to the natural sacredness of the area. They assemble in some beautiful natural space, and then ignore it’s beauty for the sake of their liturgical protocols. While they are doing these actions, they are ignoring what that sacred space has to say, almost refusing to listen to the trees and tune in to the lush growth of grasses and herbs. It almost seems like those who profess to be pagan and witches are actually quite dulled by their mundane and urban life experience, even if they live in the suburbs or the countryside. All of this is quite sad to me, since it represents the fact that some pagans are only pagan in name, that the actual mystery of nature completely escapes them.

Does anyone go to a sacred natural setting and before any ritual or liturgical work is done, ask the space for its permission and assistance? Just learning to be quiet, tuning in to nature, touching the plants and the earth itself, and then asking these simple questions would certainly make a difference.

Does anyone talk to nature anymore? Certainly, that would be sign of someone who is a pagan - talking to the trees, grasses and herbs. Learning to emulate the deep quiet of nature in one’s inner self would also allow nature to talk back, because it can certainly be loquacious in its own way. Talking to nature and listening to its subtle, deep and gentle replies is an important step to becoming a real pagan, and an important step to working magick in a grove.

I have attended many festivals and gatherings where rituals are conducted using the same old tired ritual actions, again and again, all of which are exactly the same actions that are done in a temple. No one asks the natural setting where these rites are being performed if that is the right and proper thing to do, or what, if anything, should be done. What it does, though, is create an artificial barrier between the celebrants and the actual ground upon which they are doing their rites. The earth can’t talk to them if they are assiduously ignoring it. The lack of that fundamental connection makes what is done almost absurd, especially for those who espouse to be pagans or wiccans.

So, how do we rectify this situation and work our rites in a grove setting while establishing a powerful and harmonious link with the mysteries and powers of nature? What must we do to really become a proper worshiper of nature and an agent of earth-base spirituality, not to mention work earth based magick? What we have to do is to throw away most of our assumptions and leave the temple rites in the context of the temple. For a grove, we need to approach it in a completely unique and different way.

Here are some assumptions and what impact they have on working outdoor rites in a grove setting.

Groves are naturally sacred, there is no need to attempt to make them sacred. What is required, instead, is to open the self and re-sensitize the mind and body to what is already there. So we don’t make sacred space in a grove, we open ourselves to it and make ourselves available to it.

All of the Elements are present in nature, there is no need to summon any of them. Similarly, the Gods and Goddesses are all present, there is no need to call or summon them, either. What we do is to become deeply and profoundly aware of these qualities and open ourselves to them each, one at a time.

Give offerings, gifts and veneration to the sacred space so that it will want to open up to those who are seeking to work within it, and these offerings are always organic human made things consisting of food, drink, (vegetable) oil, tobacco and other things that have been taken from nature to nurture and feed us humans. We give these things back to the earth, to show that we aren’t selfish and that we want to feed the earth as well as ourselves.

Complicated written scripts and rituals are unnecessary in a grove. Ask the grove what kind of ritual work should be done and how it should accomplished. The grove as living sacred space not only talks, listens and informs, but it can also guide one in a more effective method of working magick. Memorize what needs to be done, and then be flexible, speak, sing and dance from the heart, and be ready to throw away your assumptions to try something completely new.

Of all the four Elements, we bring fire into the sacred grove. Fire can be a terrible force that destroys nature, so it must also be venerated, worshiped, respected and rigorously controlled. Fire is a powerful spirit, and when it breaks the boundaries that control it, it can be a terrible beast. So we should approach it with great care, respect and cautious veneration. Natural fire is the light and warmth of the Sun - wild fire is what is generated from lightening or vulcanism. Similarly, we may erect and light torches or set up lanterns to illuminate the site and add a special illuminating pattern of mystery and beauty to the sacred space of the grove.

A circle can be used to help focus the magickal work, but it is not required. A permanent grove will have a few things erected and permanently left there for periodic use. These would be a circle to mark the boundary of sacred space, an altar of some kind to show the place where the gods are assumed to be (this can also be a Stang or pole), a sacred fire pit and torches and/or markers to show the approximate four or eight directions, thus making it a compass round. A temporary grove can have an altar, fire pit and torches set up, or it can have just a fire pit for the fire. There is no real need for a circle or any other distinguishing markers, just the fire pit where the human element introduces a controlled version of the Element of Fire.

Tools that are required are few - there is little need for anything that doesn’t have a practical value. A knife is used to cut and carve, something is used to make fire, perhaps even a wand can be brought with one, but a handsome stick cut from a fallen branch would do nicely. A Stang is a wonderful tool, since it melds wood and horn into a single expression, and it is iron shod. (I will be discussing this tool in a future article, so have no fear if the concept eludes you for the moment.) Learn to use only a few tools or none, and make do with what the grove offers you as a suitable magickal tool.

A grove is a very special place that is generally larger and roomier than an indoor temple, so it benefits one to dance, leap in the air, sing, beat drums, play flutes, eat and drink, and even make love, all in the name of Sacred Nature. If a person seeks something in life that he or she does not already possess, then ask the earth if it’s possible, what must be done to make it so, and then use the power and majesty of the earth to make it so. Perhaps an unusual stone will make itself known to you, or a special herb. What is at hand is all that one needs.

So to recap - how do we work magick and worship in a grove?


I think that if pagans and witches use these simple rules to work outdoors (unless they are already doing something like that), then they will experience magick in a grove as it should be experienced - without barriers or built in assumptions.
Frater Barrabbas
Posted by Frater.Barrabbas at 1:01 PM