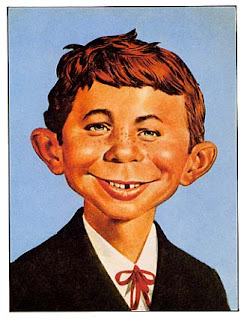 What me worry?
I don’t have to make this stuff up - life and the ever pervasive eye of television often captures the absurd and saves it for later auspicious viewing.

(Warning, a rant is coming!)

A case in point is the Tea Part politician running for Senator for the State of Delaware, Christine O’Donnell. This is one politician who has a recorded history of saying absolutely idiotic and absurd things in public, most of them having to do with obviously extremely conservative religious views. Normally, I don’t bother to report these kinds of things because I don’t write articles about politics, period.

Still, an incredibly ridiculous film clip from 1997 with Ms. O’Donnell on it was shown on Bill Maher's HBO TV show “Real Time” the previous night. Bill Maher played a snippet from his previous TV show “Politically Incorrect” in which O’Donnell, who was on the show at the time, said she “dabbled into witchcraft,” whatever that means.

Here’s the full quote, and you can find it here.

“I dabbled into witchcraft. I hung around people who were doing these things. I'm not making this stuff up. I know what they told me they do. One of my first dates with a witch was on a satanic altar and I didn't know it. I mean, there was a little blood there and stuff like that. We went to a movie and then had a little picnic on a satanic altar.”

Everyone should know the facts that Christine O’Donnell has been posing as a born again Christian who believes strongly in legislating morality for the whole country. I find this quote from her past to be quite disturbing. First off, witches are not Satanists, therefore, a real witch wouldn’t have a ‘Satanic” altar, nor would there be blood on it from some kind of sacrifice, human or animal, or whatnot. Is she making all of this up? Possibly. It’s also possible that her leg was being pulled by supposed friends, and that she was too gullible to realize it.

Whatever the case, the fact that this person is running for the job of Senator for the State of Delaware on the Republican ticket says volumes about the current state of conservative politics, intolerance, religious bigotry and extreme sectarianism in our nation. We, as a country, cannot survive if such fanatics as Christine O’Donnell become politically empowered and attempt to move their agenda into the mainstream of American culture. The U.S. is not an Orthodox Protestant Christian theocracy, it is nation dedicated to a complete separation of church and state, which is meant to preserve the freedom for everyone to believe and worship as they see fit.

It is my hope that the people of the State of Delaware will emphatically deny this woman the honor of serving in the United States Senate. I also hope that conservative politics in general “sees the light” and refrains from becoming too vested in the promotion of conservative religious viewpoints to the exclusion of all other viewpoints. We are a nation of pluralism and religious freedoms, which also means that some folks, if they so choose, can be free of all religious practices and beliefs. What Christine O’Donnell is doing is promoting one sectarian perspective as a political agenda, which will affect everyone, including myself.

I feel that I have been warned by this recent revelation and I am dismayed that it is being allowed to happen by the press and the political establishment. While the Republican establishment was initially shocked by O’Donnell’s recent primary victory, and even Karl Rove criticized her viability as a candidate, since that moment, they have embraced her as one of them. (Winning does have that effect.)

You can be certain that I will place my sacred vote this November for candidates who represent progressive causes and religious tolerance - for everyone. Tell others you know not to be complacent about casting their vote this November. G.O.T.V.!

(The rant is over, we can all take a deep breath now!)
Frater Barrabbas
Posted by Frater.Barrabbas at 5:26 PM