A Brief History of the Qabbalah - Part 2 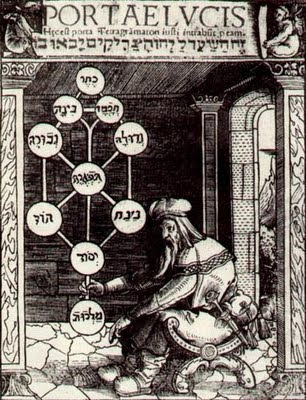 This is part 2 of a three part history of the Qabbalah.


3. Sepher Yetzirah and Qabbalah Ma’asit. From the 3rd Century C.E., the primary concept of 32 emanations with Mystical Names of Power is established. The practical Qabbalah became a system of theurgy based upon an occult epistemology. The influences of Greek Neoplatonic philosophy is apparent in the use of Emanationism and represents a borrowing and  reinterpreting of both the traditional Hebrew sources and Greek Philosophy. Although, according to Scholem, specific Neoplatonic ideas, such as Emanationism, deliberately found their way into the Qabbalah at a later time. The influences pervading the Sepher Yetzirah would appear to be more associated with Jewish Gnosticsm and its heterodoxic incorporation of various Greek philosophical elements and influences.

The Sepher Yetzirah (Book of Creation) is a product of the fulfillment of the esoteric speculation of the ma’aseh bereshit (act of creation), from which it produced a detailed cosmology and cosmogony. It is considered the earliest Hebrew text of this kind of systematic thought, and although it was brief and concise, its influences were to have a profound impact on Jewish mystical and occult speculation. Divine wisdom is an important theme for the Sepher Yetzirah, since the creation of the cosmos is evidently accomplished through “32 secret paths of wisdom.” These 32 secret paths of wisdom are defined as consisting of ten numbers and twenty-two elemental letters, and represent the foundation for all creation. The word for number is Sephiroth, which is, according to Scholem, an unusual word usage, since the typical Biblical word would have been “misparim” for numbers, signifying that the author of this book had a more metaphysical or esoteric definition for this term (they weren’t just ordinary numbers).

According to the Sepher Yetzirah, the ten Sephiroth didn’t just sequentially emerge from the unknowable source, but instead had a specific pattern. The first Sephirah was called the “Spirit (ruach - also ‘air’ or ‘breath’) of the Living God, ” thus representing a direct link to the Godhead (divine wisdom), and from that first Sephirah, came forth, through a process of condensation, the three primal elements, which were part of the first four Sephiroth. Thus Spirit begat Air (the primary element), which in turn begat Water and Fire. From the primal element of Air was created the twenty-two letters, from Water was created the cosmos, and from Fire was created the Throne of Glory and the hosts of the angels. The final six Sephiroth are completely different and divergent, representing the six dimensions or directions of space, although it is not expressly communicated that these six were generated from the prior four, one can assume that to be the case.  The ten Sephiroth represents a complete and unified system, where they become the foundation for the Throne of Glory contained by the Chariot (Merkhabah).

It is through the Twenty-two letters that the material universe is formulated, obviously through a process where words were generated, and thereby created the material things that they so named. This was very likely based on a concept of word magic, which has been found in various forms throughout the Middle East (and is well represented in the Greek Magical Papyri). A word based mysticism formed around 221 mystical gates, which is a number representing the possible number of two letter verb roots (as would be found in Hebrew), although the preeminent word is the four letter name of God (the Tetragrammaton YHVH). The Twenty-two letters are broken into three groups: the Mother letters of Aleph, Mim and Shin (3 letters as the 3 elements), which fashioned the seven double letters (celestial planets) and the twelve single letters (zodiac).

Mr. Scholem observes that there appear to be links between early Gnostic sects and their concept of Aions and the Pleroma, and the Jewish concept of Middot or “Qualities of God,” which went so far as to replace the chayyot (living creatures) and presiding angels in the Merkabah system. There is speculation that the Middot were the precursors of the Sephiroth, and the number ten is also revealed in the “ten sayings by which the world was created.” Mr. Scholem is doubtful about the impact of Neoplatonism on the early Qabbalah, particularly how it is depicted in the Sepher Yetzirah. However, he appears to accept the linkage between Gnostic groups and Jewish esoteric teachings and their adherents. My opinion, although unsubstantiated, is that the Jews would have been exposed to Greek philosophy through contact with refugee Alexandrian Jews (117 CE) and by the influence of other pagans who were living in Sepphoris at the time. Although these philosophical concepts and beliefs (such as those proposed by Philo) were either expunged or not even allowed to be used in the building up of the biblical commentaries (Talmud), they still could have permeated the minds of Jewish intellectuals of the time.

Examining the philosophy and writings of Philo of Alexandrian shows how the Jewish intelligentsia (in Alexandria) evolved the interpretation of their faith to accommodate Greek philosophy without diluting their spiritual heritage. Although there is little evidence that this merging of Greek philosophy and Jewish theology had any impact on the writing of the Talmud or later Jewish religious thought, it still must have had some impact on the greater Jewish world. The fact that later Qabbalists extensively used obvious Neoplatonic ideas to develop their own speculations and insights may in fact point to earlier associations and borrowing. It might also be possible that Neoplatonism borrowed ideas and practices from Jewish esoteric literature. Certainly, magical books, such as the Greek Magical Papyri, show a deep knowledge of Jewish religious and mystical traditions, freely mixed with Greek, Egyptian and even Iranian beliefs.

The time period of the composition of the Sepher Yetzirah has been given as between the third and sixth centuries C.E. As it was so succinctly stated by Gershom Scholem in his commentary, “Graetz tended to correlate the time of its composition with that of the Mishnah or the beginning of the period of the [Jerusalem] Talmud..” And also the statement, “The Hebrew style, however, points to an earlier period. Epstein already proved its proximity to the Mishnah, and additions can be made to his linguistic proofs.” Scholem goes on to say that, “ The book contains no linguistic form which may not be ascribed to second or third century Hebrew.” (p. 26)  The original core manuscript can be attributed to this time period, but other post Talmudic elements were added later in its evolution.

I would speculate that the Sepher Yetzirah was written by a Jewish occult scholar, possibly with input from others of like mind, in the town of Sepphoris sometime in the early third century. Sepphoris was a very interesting place at that time, since it had survived the Bar Kokhba revolt (132 - 136 CE) and subsequent Roman suppression. It became the temporary home of the Sanhedrin, the place where the Mishna was first composed and it was where the Jerusalem Talmud was first assembled, only incomplete sections of which exist today. It was also a place populated by non-Jews (Romans, Greeks, Christians and various Semitic pagans) and where a sect of Jewish Gnostics had their home. Scholem indicates this fact with the following curious quote (although he doesn’t connect the writing of the Sepher Yetzirah with Sepphoris): “In this period a Jewish Gnostic sect with definitive antinomian tendencies was active in Sepphoris.” (p. 12)

It would seem then that the Gnostic and Greek philosophic elements found in the Sepher Yetzirah could be explained due to the proximity of Greek pagans and a Gnostic sect as found in the town of Sepphoris. The author of this work would have been able to distill various strands of Neopythagorean, Neoplatonic and Gnostic beliefs that were readily available along with Jewish mystical speculation, producing a powerful and elaborate synthesis, which affected Jewish mystics and occultists for centuries afterwards.


Geonic Mysticism. The Talmudic and Mishnaic periods from the 6th to 11th Century C.E. was a period of great creativity, but it did not substantively produce any new, original doctrines nor additional insights about the Qabbalah. Mystical and magical activity shifts from Palestine to Babylonia, but some activity continuing there for some time.  However, in the area of practical Qabbalah and theurgy, a great deal was developed and expanded upon. Practical magic existed side by side with the contemplation on the Chariot. Some practical magic focused on the angelic princes of wisdom and the Torah, such as Yophiel and other high level angelic intermediaries. In addition, a system of demonology was developed, becoming rich in mythologic detail.

Towards the end of this period, the various sources began to be assembled for the next great leap forward (which was to occur in Provence). The book “Raza Rabba” (Great Mystery) appears to have been written, which contained a great deal of magical and occult material. The angelology of this book appears to be a synthesis of an earlier form of Gnostic metaphysics, such as the Aions and the Pleroma. Three trends can also be traced to this final period of flowering before the center of Qabbalistic thought migrated to the West (Italy and Provence), and these trends can be characterized by the following paragraphs.

Neoplatonic elements began to influence and infiltrate Qabbalistic thought. The philosophic concept of emanation altered and refined the ideas of the ten sephiroth, along with the notion of “hypostasis”, which caused these abstract numerations and reflections of the Deity to become more like separate entities or distinct beings. Additionally, the concept of the Shekinah became affected by the influence of these beliefs so that it appeared to function distinctly from the Godhead, becoming analogous to the Gnostic concept of “Sophia” (Spiritual Wisdom).

Another new theme that was adopted into the Qabbalah was the transmigration of souls, obviously appropriated from Neoplatonism, but integrated into a Jewish eschatology. This belief would be modified and advanced in later Qabbalistic speculations (particularly in the Spanish and Lurian Qabbalah).

Gematria, and other systems of numerology, were developed to show a link between sacred names, and words and phrases from the scriptures and liturgy - these techniques became known as the “theory of names.” It was believed that gematria could be used to determine and enforce the proper spelling of important words and names, and also reveal the hidden and secret intentions (kavvanot) behind the actions and sayings attributed or associated with the Deity. Oddly, gematria and other notation systems produced a more influential occult spiritual perspective, but one that was steeped in theurgy and theosophy (gnosis) and less reliant on ecstatic practices and rational speculation (although, this would also change later on).

Scholem encapsulated this period of Qabbalistic development with the following insightful statement, which I have quoted here.

“From the remains of mystical literature extant from the talmudic and geonic periods it can be deduced that these types of ideas and attitudes [theurgy and theosophy] were wide spread in many circles, wholly or partially restricted to initiates.” (p. 34)

Scholem goes on to say that those who practiced Qabbalistic theurgy were called (in Aramaic) “ba’alei ha-shem” (users of the Name). He also says that their identities were wholly unknown and that they typically were not rabbinic scholars.
(To be Continued...)