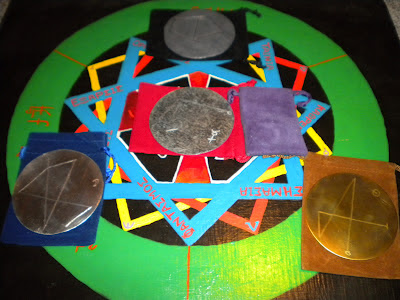 Last night I pulled out the four talismans that I have generated for the Portae Lucis working and arrayed them as they will be used for the actual working when I will perform the Triple Tetrahedral Gate ritual, which is rite that employs a double gateway (West and East) connected with an Ascension Gate in the center. The Ascension Gate will have four points (a triangular gateway and a point in the center), and these will be occupied by the four talismans.

Here is the introduction to the ritual, as it is written in the ritual documentation:

“Ritual of the Triple Tetrahedral Gate, also known as the Double Gateway with Ascension Gate, is a ritual structure which specifically unlocks the power of the Abramelin Lunar Ordeal. Through the passage of the gate of darkness, the seeker enters the super-symbolic world of spiritual consciousness, and therein undergoes extreme transformation as symbolized by the Ascension Gate. This transformation  resounds within the individual, affecting his/her inner and outer perceptions, which in turn causes changes to resonate in the material world (the gate of light). What fuels these changes is  represented as the psychological process of radical changing/evolving awareness, and symbolized mythically as the transmutation of the previously Invoked Godhead, as derived from the Archetypal Gate Ritual.

The tetradic pattern of this cyclic process (cycle of darkness and light) is controlled by the double gates, which are symbolized as the  gateways of light and darkness (dawn and dusk), conjoined in the mystery of the ascending and descending emanations of the Godhead (path of the Sun). Thus the double tetrahedral gate ritual pattern is the ritualized representation of this mystery, wherein the Gate of Ascension pulls the rest of the ordeal working into a single profound expression. What follows is the complete realization of the Godhead, completing and fulfilling the Archetypal Gate.

The structure of this ritual consists of the joining of the Western Gate (the Gate of Night) with the Eastern  Gate (the Gate of the Coming Forth by Day), and between them, performing the Ascension Gateway. This invocation accompanies the assumption of an invoking trance wherein the visionary experience of the Godhead is obtained. Both Gate structures use a five-fold formula, and also a five point circle structure, thus establishing the double tetrahedral gate in each point. The Ascension Gateway is a simple three point structure, using the northern and southern nodes and the ultra-point, producing an equilateral triangle.”

Even though I used this ritual in the Abramelin Lunar Ordeal, I believe that it is perfect for the climactic rite for the Portae Lucis working, for obvious reasons. When I was trying to determine how I would put together a rite that would do what I sought to accomplish for the Portae Lucis working, this ritual really stood out, and I found, after reading it over again, that it was exactly what I needed. How serendipitous is that? (I didn’t even have to write a new ritual for this working!)

Anyway, since last night was still within the orb of the Full Moon, and because there was also the added feature of the Venus transit, I decided to assemble the talismans in a triangular array and see how they functioned together. I lit the candles, ignited the charcoal, and then fumigated the temple with incense smoke. I then sat down before the talismans, which I had set upon a special trigon (for the Quintedecim Complex), and then proceeded to meditate. I was completely blown away by the intensity and potency of this array. My immediate thought was “Wow!” and I could just feel the power emanating off of these four talismans working together as if they were a single unit.

After that distraction, I then proceeded to enter into a deep meditative session (or as deep as I was able to go with all of the energy stimulating me), and within that state, I asked for illumination and that I was seeking a direct conscious connection with my higher self through the portal of light and beyond, into the realms of the supernal triad. I also asked that all of my negative relationships (I do have a couple of people who dislike me or perhaps, even hate me) be completely resolved, and that I will be able to rise above and master all adversity that might come into my life (from this time forward). That was, in a few sentences, my intention for engaging in this work, and I believe that stating one’s intention before a working is commenced is very important. All I can say is that the whole experience was deeply thrilling, and I could easily see that the final set of workings, starting a week from this Saturday, will be quite amazing indeed! I have never attempted to join multiple metallic talismans in such an array before, and the combination greatly magnifies the effect, even beyond my expectations.

I was so pleased with that simple working and statement of intention, that I allowed the array to remain in place the entire evening. It could also explain why I had a lot of really lucid dreams and strange symbolic visions while I slept last night. In the morning, I put the array away, but it was still emanating a powerful aura of magick and mystery when I entered the temple to perform that task.

So, I am ready for this ordeal to be started, and I can feel the joy and the anticipation grow as I wait the countdown of days. This is going to be a very awesome working, and I am greatly looking forward to it. For an added feature, I decided to include a photograph of the talismanic array, so you can see for yourself how interesting this construct actually looks. (Ah, but to feel it, that took my breath away!)