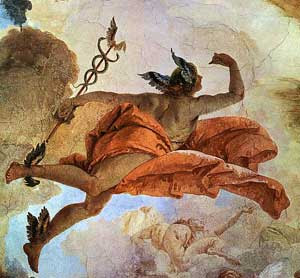 On Thursday, May 31, I performed the fourth fourfold talismanic working of Mercury as part of the Talismanic Portae Lucis ordeal. I had originally planned on just invoking the talismanic elemental of Mercury of Air, but decided instead to engage all four elements into the process, as I have done with the talismans of the Sun, Moon and Saturn. Even though this does change somewhat the nature of what I am doing, I felt that it was appropriate to employ the other elements. The lunar mansion is still associated with the talismanic elemental of Mercury of Air, so during the period of Al Jubana (Mansion #16, translated as the Horns of the Scorpion), which occupies the domain of the zodiac of Libra 12 degrees and 51 minutes, I successfully performed this working. For the date of May 31, I had to complete the talismanic working before 11:32 PM, when the mansion period would expire.

The fourfold elemental talisman of Mercury is not specifically a component of the Portae Lucis working, instead it is a place marker for myself in this ordeal. I had determined that I needed to create a power base to act as my foundation while performing this working, so I chose Mercury for that role. I am also planning on performing an invocation of my spiritual sponsor, who is Hermes Thoth, just before the main working will start. Since the ordeal will begin on Sunday, June 17, I decided to perform the shortened version of the invocation on Saturday night. I decided that the four-fold elemental talisman of Mercury would be a good foundation, and that invoking Hermes Thoth would be a powerful addition to this working. What I am planning on doing is to stack the deck in my favor and give me as much of a boost and an infusion of power and wisdom as I can stand. I have also decided to perform a godhead assumption of Hermes Thoth during the Portae Lucis ordeal (something that I have never done before), and thereby truly fortify myself for this working.

Since this fourth talismanic working didn’t engage any of the parameters of the Portae Lucis ordeal, I believed that I wouldn’t have to go through any of the difficulties or trials that I had undergone previously. This assumption turned out to be true, and the talismanic working was performed without any major trials or issues surfacing, either before or during the operation. As this quiescence bought me some peace of mind, I implicitly knew that it will be just a temporary respite, since I will be starting the ordeal proper in two weeks. Then at that time, I am certain, there will be challenges and difficulties undreamed of so far.

I chose to perform this fourth talismanic working during the planetary hour of the Sun, since that was the only auspicious hour that would work for me, due to the tight schedule that I had to incorporate into the working. I would have loved to have been able to do this working during the planetary hour of Mercury, but that hour occurred just before 5 pm, and it was too early. The other hour of Mercury was too late, and would have pushed the working past the boundary for the lunar mansion. Even though I believe that the planetary hour gets locked once I consecrate the magick circle, I also believe that the lunar mansion doesn’t get locked in the same manner, so I had to complete the working before 11:30 pm. So the combination of planets for this working (associated with the day and hour) were the Sun and Jupiter, which I felt were a good combination for a beneficent Mercury working.

Since I had a bit of extra time before I had to set the magick circle, I performed the Mass of the Great Goddess and consecrated the sigils and the metallic talisman. I chose to use a three inch Zinc disk for Mercury, and it seemed to function and feel as I had hoped it would. While some purists might complain that I was using a substitution of either real Mercury or at least Hematite, I have always felt that using such substitutions, as long as they made sense to me, were quite acceptable. I had some issues carving the sigil of the ruling angel of the lunar mansion onto the surface of the talisman, since I had assumed that Zinc would be soft and the metal disk would be fragile. Although Zinc is a very light metal, it is rather hard, and it took me a bit of an effort to finally get the metal surface etched with the sigil. The lightness of that metal was also a bit surprising, and it made handling the talisman a bit awkward. It slipped out my hands twice during the operation, and actually dropped to the floor when I was attempting to consecrate it during the Mass. I just cleaned it off and continued consecrating it. The second time occurred when I was anointing it with Amber oil, but it fell on the septagramic trigon instead of the floor, so there was no danger of losing its charge by grounding. At any rate, the Zinc disk was slippery and smooth, and nearly as light as aluminum. I will have to take care when handling it in the future.

After the Mass rite was completed, I set the magick circle and locked in the planetary hour of the Sun at approximately 9:45 pm. The ritual working went smoothly and almost effortlessly, with exception to the wiggly nature of the Zinc disk, and nothing happened to either subvert or distract from the operation. I felt the energy reach a potent climax and be absorbed into the metallic talisman, and it is now undergoing the required 72 hours of incubation. The Mercury talisman will be ready by Monday morning, which also happens to be day of the Full Moon.

Since I have now gotten all of the bugs out of this methodology for crafting fourfold elemental talismans using a metal disk as a target, and that I have now successfully generated four of these talismans, I have decided to generate and charge three more of these metallic talismans with the rest of the fourfold elemental planetary talismans. Later in the summer, I will craft talismans for Venus, Jupiter and Mars, and then I will have all seven, representing the entire spectrum of the twenty-eight talismanic elementals. However, I will perform these workings well after the Portae Lucis working is completed.

Coincidentally, the planned date for the final Portae Lucis working is for June 19, which will also be the day of the New Moon. It would appear that I will be working this rite under the auspices of the completely occluded Moon, which will be in the zodiacal sign of Gemini (which happens to be my natal lunar position). The next day will be the summer solstice proper, when the sun will enter the sign of Cancer, although the moon will enter into that sign a full day before the sun. There are some very interesting astrological aspects to consider for that day, and I don’t doubt that the ordeal will be quite eventful.

I am also planning on performing some Qabalistic path-working exercises to help me link the Sephiroth of Malkuth, Yesod, Tiphareth and Binah. The associated Pathways are the 32nd Path (Atu XXI - Universe, Tau, Saturn and Earth), the 25th Path (Atu XIV - Art, Samek, Sagitarius) and the 17th Path (Atu VI - Lovers, Zain, Gemini). By performing these path-workings, I hope to clear a pathway from my body consciousness (in Malkuth) to the supernal triad, warded by Binah. In doing all of these exercises and devoting this time exclusively to my magical workings, I am hoping to have the most profound experience possible. I am also intending on taking the days from Monday through Wednesday off from work, so there won’t be any distractions.

I have always treated the Summer Solstice as a kind of holiday, where I can relax and begin to enjoy the brief summer period as it typically occurs in the Norther regions. I have seldom worked any major magical workings during this period, and it typically extends until September. I have always been much more aligned with performing ordeals during the autumn and winter months, but this time I am engaging in a major working during the more balmy and naturally awakening period of early summer. I am hoping that Jean Dubois is correct in his insistence that this working of the Portae Lucis be done just prior to the Summer solstice. As I am engaging in this working, I believe that he is correct in his assumption, but it hardly would have occurred to me independently to take this course of action. I guess that I will have to seriously rethink how I use the seasonal calendar in order to determine if there are any other opportunities that my habitual responses to the changing seasons has obscured or hidden from me.

Anyway, I have learned something new, and I am eagerly looking forward to completing this ordeal. I suspect that the Summer solstice will be quite glorious for me, and I hope to share that joy and the insights that it generates with all my associates. I will also share these experiences with my readers, posting a very involved but edited version of my magical journal for all to read and ponder.