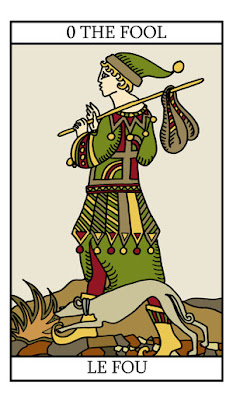 Many years ago, I discovered that the exact number of Tarot trumps found in the Major Arcana was identical to the overall number of stages in Joseph Campbell’s iconic book “Hero with a Thousand Faces.” I also found that this apparent coincidence had an even greater impact when I was able to match each Tarot trump to one of these twenty-two stages. This wasn’t a loose affiliation, the twenty-two stages matched the twenty-two Tarot trumps almost exactly. Yet I didn’t so much as use this newly discovered pattern as a tool for Tarot divination as I did for practical magical applications. I found that the magical use of the double gateway was the whole basis for the underworld cycle not only of the Hero’s Journey, but of the mysterious process of transformative initiation itself.

It would seem that the Hero’s Journey was also the cyclic process of death and rebirth that ruled the more profound changes that occurred within a person’s psyche. Also, since I used the sequence of stages in the Hero’s Journey to specifically qualify the matching Tarot trumps, it did indeed change how I defined those trumps and it impacted how I interpreted them within a divinatory reading. But the Roman numerals that were printed at the very top of each Tarot trump seemed to have less to do with the actual sequence of the Hero’s Journey, and could therefore be ignored when working with this pattern.

If you want to review what I have written on this subject, you can find that article here. This is a theme that I have been presenting and working for many years now. I originally discovered it back in 1976 when I first read Campbell’s book, and found how these stages do indeed match up with the twenty-two Tarot trumps.

However, I found that the greatest power in using this structure was in the actual development of a mystery system of the Self, which is one of the key elements in the five mysteries of the modern pagan world. Since the mystery of death is one of the greatest mysteries, along with the mystery of the creation of life, any archetypal system that uncannily depicted that process would represent a very powerful symbology useful in both ceremonial initiations and magical workings. This pattern consisting of accessing the underworld, undergoing a complete dissolution of the self and then its resolution and return to unity in a new guise, and finally emerging from out of that place of darkness and death is perhaps the greatest mystery cycle for all living things. It is also reminiscent of a more ancient psycho-spiritual cycle, and that is the healing and redeeming cycle of the archetypal shaman. So it would seem that this archetypal pattern is not only very ancient, but it is still very relevant today. I have discovered that it is completely integral to any kind of modern pagan system of magick and mystery.

Yet as I have proposed the universality and usefulness of this cycle of transformative initiation in the works of ceremonial mysteries and the basic tools of ritual magick, others have also seen this analogy between the Heros’ Journey and what is called the Fool’s Journey, or between the cycle of the hero and the sequence of the Tarot trumps. These others have included a few authors who have taken this pattern analogy and applied it strictly from the perspective of the Tarot and performing Tarot divination. Still, there is some question as to whether what I am proposing as a complete comparative analogy between the stages of the Hero’s Journey, and what others have called the analogy of the Fool’s Journey to the Hero’s Journey represent merely two different ways of stating the same thing.

As far as I am aware, the Fool’s Journey is a title for the numeric sequence of the twenty-two trumps of the Tarot, beginning with the first card in that sequence, which is the Fool. Some writers have compared this sequence with the 17 stages of Joseph Campbell’s Hero’s Journey, mostly using the stages as place holders for a Tarot card reading using all 78 cards. However, the 17 stages of the Hero’s Journey doesn’t  represent the complete cycle because it is missing an important additional set of five stages, which are known as the Cosmogonic Cycle, or the cycle of Creation through Dissolution. The Cosmogonic Cycle is important because it represents the vision that the Hero experiences when he is fully reconstituted (reborn) and awarded the boon or gift for his achievement. In fact, I will go so far as to say that the Vision is synonymous with the boon that the Hero receives. The critical importance of that vision of the Cosmogonic Cycle is that it assists the Hero in determining his destiny within the greater world drama, once he has acquired a renewed self definition.

The Cosmogonic Cycle consists of the five basic phases of the material and spiritual universe. These are described by the five rubrics - Source, Creation-Emanation, Mythic-Golden Age, Age of Death, and Ultimate Dissolution. These five stages represent the life cycle of the cosmos, and it is important for the Hero to realize his specific role and part in this transitional drama. So the Cosmogonic Vision not only imparts the mythic narrative of creation and dissolution, but it also determines the specific mythic and historical context of the Hero, showing his place in the present world and his ultimate destiny.

What I have proposed would essentially exclude any consideration of the Fool’s Journey, since by applying all twenty-two trumps to all of the stages, including the Cosmogonic Cycle, the numeric sequence at the top of each card (typically in Roman Numerals) is altogether ignored. Therefore, when examining the twenty-two Tarot trumps as active archetypes to be used within magical initiations and invocative operations, they become instead actual triggers for spiritual and psychic transformation. In other words, these twenty-two stages become the actual symbolic progression of a profound internal transformation, which is harnessed and controlled by the magical practitioner. This is quite different than anything that I have so far seen where the Fool’s Journey is compared to the Hero’s Journey. What I am proposing has little to do with divination, other than it serves to completely redefine the Tarot trump cards when they appear in a reading; it has to do with dynamically using the Tarot trumps to trigger an internal, psychic and spiritual transformation within the operator. It is, therefore, a highly active and instrumental use of this pattern.

Additionally, there is not only a Hero’s Journey, but also a Heroine’s Journey. Although this mythic theme is rare, it does have some representations, most notably in the tale from antiquity entitled “Eros and Psyche,” which appeared in the book “The Golden Ass,” written by Apuleis. Another example of this myth is to be found in the Scandinavian folktale “East of the Sun and West of the Moon.” It can even be found in the modern story, “The Wizard of OZ.” While similar to the Hero’s Journey, it is also remarkably different, so it would have a somewhat different sequence of twenty-two trumps to effectively qualify that cycle. So where a man would focus on the Hero’s Journey, a woman would focus on the Heroine’s Journey, and the difference in the qualities and outcome between the genders is quite remarkable. So far I have not found anyone who was talked about the Fool’s Journey and the Heroine’s Journey, so that aspect of the magically transformative cycle has yet to be adequately covered by some author.

This leads me to the actual point of this article. I have been thinking about writing a book that would examine this myth purely from the point of view of the showing how the Hero’s Journey can be further defined by the twenty-two Tarot trumps; but instead of using Campbell’s text, I would seek to approach this work from the perspective of the Tarot trumps. I have never really written an in-depth analysis of how these stages are identical to the Tarot trumps, since it always seemed so obvious to me. In order to accomplish this task, I will have to go back to the Italian artistic emblems from which they are derived. I will have to engage in a greater symbolic analysis of the Tarot trumps to prove without any doubt that the stages match the specific Tarot trumps. Once this is accomplished, I can then show how the newly developed Tarot based cycle of transformative initiation can be used in initiation rites, ordeals and even forms of pagan based evocation of spirits. To my mind, no one yet has done this work, so I think that this book will be well received and important to anyone who is both a Pagan, Wiccan and magical practitioner.
In my forthcoming book proposal, I will discuss in detail the nature of this Hero’s Journey (and the Heroine’s Journey) and how it relates to the original Shamanic healing cycle, and how it can be deliberately used to foster a kind of theurgic transformation. In this way, the Hero’s Journey becomes a symbolic euphemism for transformative initiation within the regimen and practices of the ritual magician. Anyone who is interested in capturing this process in their own initiatory rites, emulating the basic mystery system that it underlies or using the double gateway and underworld thematic structure for accessing the unconscious and entering the domain of the Gods and the mysteries would prize a literary work that demonstrates how this might be accomplished. I am inspired to write this manuscript, but I hope that a publisher will also be as interested in publishing it as I am in writing it.

Anyway, this is new book idea that I am going to be researching and developing over the next several months. I see it becoming quite a significant work for me, and although it will repeat many themes that I have already written about, it will do so in much greater depth and detail than what I have done previously.