Terrible Death of a Thelemite 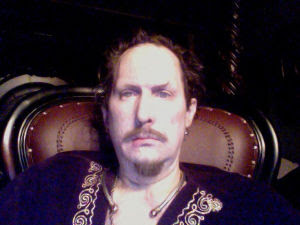 Last month I had heard that one of my acquaintances from long ago was murdered in his home in Columbia, MO. That individual was Brian Daniels, who I had met during my interlude in Kansas City, back in around 1985 to 1986. His half-sister introduced us and told me that we had a lot in common with each other. When I spent some time with Mr. Daniels, I found him to be quite harmlessly demented, perhaps even a borderline psychotic. Brian implored me to invoke Satan so that he could meet him, because he believed that the Devil was his real father. I also heard that Brian had performed his own kind of Satanic Mass, blessing the wine and hosts in the name of the Devil and inviting demons to enter into them, and then at the climax of the rite, greedily consuming them. His reasons for doing this is that he wanted to become completely possessed by the Devil.

I found Brian to be something of a nut-case and refused to have anything further to do with him. Even though he was quite delusional, I thought that he was also quite harmless. Brian never hurt anyone, nor was he was ever violent or even vocal about his apparent off-putting mental problems. However, I didn’t invite him to be a part of the then forming Order of the Gnostic Star, and I also declined to either initiate or even ordain him, as he had apparently hoped. In fact, I tried to convince him to get out of the occult altogether and get some help for his obvious mental instability. He found that to be quite funny and still had hopes that I would relent.

Brian passed out of my life once he determined that I wasn’t going to enable his delusions, and from what I understood, he moved on to other pursuits. Once in while, one of my acquaintances would tell me something that they had heard about Mr. Daniels. I had heard, for instance, that he had moved to Columbia to study at the university there, but never pursued a degree. For those who might not know this little fact, Columbia is the capitol of the state of Missouri. Another time, I had heard that he had been involved in a terrible apartment fire and that he had barely escaped with his life. There had been some issue with the smoke alarm detectors not having been properly installed and failing to go off, and that Brian had received a considerable sum of money as a form of compensation. Apparently, the fire had left him disfigured and crippled one of his arms and one of his legs, making him rather incapable of either getting or keeping a job. As a disabled person, he earned disability coverage for life as well as being the recipient of quite a windfall from the ensuing lawsuit.

From what I understood, Brian pursued his passion for magical artifacts. He ordered artistically produced magical tools from various local artisans, and he also collected and sold valuable artifacts on Ebay. From what I had heard, he had grown out of being a diabolical seeker to one that was firmly in the Thelemic camp. I don’t know if he ever joined the OTO or received any initiations in that or any other organization, but he did delight in projecting a kind of creepy, occult image of himself in a town that was probably quite conservative, despite the presence of the State Capitol and the University. If anyone had ever asked me what I thought about Brian Daniels, I would have said that he was a harmless crank. So, that’s the most of what I remember about him back in the days when I lived in Kansas City; and that is all that I remember hearing about him since those days from folks with whom I have met whenever traveling up that way.

Then I read in an April edition of the “Wild Hunt - Unleash the Hounds (Link Roundup)” a news item that Brian Daniels was found shot to death in his home in Columbia on April 10th. I was a bit shocked to read this news item, so I followed the links and verified that indeed, this was the Brian Daniels that I had known. You can find a newspaper article about the murder and its early investigation here. However, a few days later, Brian’s alleged lover, house-keeper and intimate friend (who even had the power of attorney) was accused of the murder. Two other suspects were also arrested for lying to investigators. You can read about the whole sordid affair here. Even despite the controversy associated with Brian Daniel’s life and his rather lurid public persona of being a Thelemite and a closet Satanist, the local newspaper wrote an op-ed on his life that was quite fair and open minded. That impressed me and it also gave me hope that maybe there is some degree of compassion in the world for those who are not normal, particularly in a part of the U.S., which is not known for its compassion to pagans, witches and occultists. Yes, they painted him as some kind of crackpot occultist, but at least the human behind the facade was also noted. I am sure that Brian Daniels would have relished the attention that he is posthumously getting, since it shows him to have finally achieved his desire of being one of those infamous forbidden left-hand path magicians and occultists. Yet part of me feels sad about the whole ugly affair.

However we judge Brian Daniels, he deserved to live out his full life without being murdered. It is an object lesson to all occultists that we need to ensure our own safety and well-being, despite the capriciousness of fate and that bad things do happen every day. It is also sad because even though Brian was one of those individuals who delighted in the “ooky-spooky” aspects of the occult, he was essentially harmless. Whether or not he was ever able to deal with his lifetime of mental problems and serious psychological defects will never be known. His story will remain basically untold, but one can assume that such troubles are never fully eliminated, and they may have contributed to the obvious poor choices that he made in regards to the affairs of the heart. Those poor choices prematurely ended his life; but I suspect that he was likely also lonely and without family support and care, and this can lead nearly anyone to make bad choices as far as friends and lovers are concerned. May whatever Deities were in alignment to Brian Daniels at the end assoil his troubled spirit and keep him in a place of peace forever.

All of this is, of course, quite sobering to me, and it shows that human nature is fragile, relationships and trust must be given to those who are truly worthy, and that life is precious. We must guard ourselves from the iniquities of those who would do us egregious harm, and seek the blessings of the Gods to ensure that this state is maintained.

Update: Jefferson City is the Capitol of Missouri, not Columbia. My mistake.

Posted by Frater.Barrabbas at 8:00 AM