Search for the Lost Month 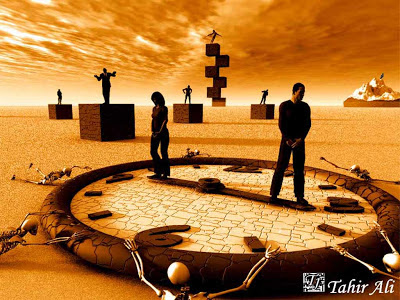 The month of May has come and gone already, and my quest to get more done in the areas of my life that have been lately severely lacking my attention has, more or less, failed. I am not giving up by any stretch of the imagination, but it certainly was one of those months that came and went without giving me any sense of fulfillment. What started out undone at the beginning of the month ended that way, much to my frustration. What topped the month off for me was being dreadfully ill for two weeks, and I am in fact still recovering. It would seem that I will have to apply a renewed effort to once again get everything completed that I wanted to get completed several months ago. My job seems to be the only recipient of my successfully renewed efforts, and I have been able to complete a number of important and difficult tasks - but not so with anything having to do with my spiritual and occult studies. [As you have no doubt noticed, there were only two blog articles last month. That number is a new low for me, and I am quite saddened by it.]

A year ago I was putting into place the last pieces of my own version of the Portae Lucis working and getting ready for the climax of that process. This year not much is happening in my temple other than the obligatory offerings of incense and occasional meditations. I did reach out to my Higher Self when I was in the midst of my illness last week, and not only found a great deal of comfort from its presence but it also helped me to turn the tides and move toward recovery. I had to withstand three days of sleeplessness due to the intense nature of the coughing fits that I was experiencing. I had a very nasty bacterial bronchitis, perhaps the most severe that I have ever experienced, and it required the use of antibiotics to actually rid me of this invasive pest. My symptoms have dramatically changed for the better, but there is still a bit of a residual cough, so I am not completely well just yet.

One really good and important thing that I am doing is continuing to read and study the book “The Shape of Ancient Thought” written by Thomas McEvilley. In his book, Mr. McEvilley shows how the linkage of ideas between Greece and India via Persia, and earlier, Messopotamia, were the sources for what utlimately became the philosophical systems of monism. He has shown rather expertly that the sources for the Orphic mystery cult was in fact in India, and that the advent of philosophical monism in ancient Greece had its sources in the Indian Uppanishads of the same time.

I am not ready to get into the real details of these various analyses, but it would seem that neither Greece nor India were completely isolated from the rest of the ancient world, and that the diffusion of ideas was something that had happened for a quite a long time. Even ancient Egypt played an important role in the diffusion of ideas, especially during the late dynastic periods when Greeks (such as Heroditus) were visiting and gaining access to their massive collection of time honored knowledge. Anyway, all of this is helping me to plot a pathway for establishing a modern Neoplatonic perspective that is nourished by Indian Tantric philosophy, and so will hopefully avoid the pitfalls of dualism that seem so persistent in the ancient variations of that discipline.

Once I have completed fully reading that book, I will then turn to studying specific chapters and taking copious notes. It is my belief that I will be able to develop an occult philosophy that will be able to accommodate my modern pagan and magical perspectives. Anyway, at least in this area I am uncovering new prospects and insights that will shape my future spiritual and magical workings. Even so, I need to move forward with my magical workings, and I need to reconstitute my magical and spiritual discipline.

On another front, I will be engaging in a podcast interview with Eric Koetting (author of several books, including “Evoking Eternity” and “Ipsissimus”). He is interested in talking to me about my specific take on the invocation and evocation of spirits. I had a wonderful phone call discussion with him over a month ago, and it would appear that he and I agree that the most fruitful approach to working spirit based magic is to develop and build your own system, borrowing from traditional sources as well as crafting uniquely modern techniques. I am glad that Eric is not one of the followers of the strict adherence crowd in regards to the old grimoires. I also believe that this discussion will be quite interesting to anyone who has a stake in these kinds of higher forms of magic. While Eric hails from a very left-hand occult perspective, it is interesting to note that his evolution has brought him to a place analogous to my own. I have opted to take a middle ground between what would be considered the left-hand or right-hand path to enlightenment, but much of my magical work as well as my spiritual perspectives would find more acceptance amongst those of the left-hand path than those on the right.

My interview will be conducted on Thursday, June 13 at noon CDT, and the video/sound file capture will be deposited at a site owned and managed by Eric. I will certainly let you know how this interview turns out and where you will be able to find the web-based file. I have never done this kind of podcast interview before, so it will be interesting to see how it turns out. I might decide to do some of my own interviews in the future, since I do have an assembly of bright friends and associates, and our private conversations are usually quite lively and interesting.

So, now the big question is what should I do about this overall lack of focus? I really need to start dividing my time and learning to be much more efficient with my efforts. I have a massive list of articles to write for this blog, but I just haven’t had the time to write and post them up. I also have a pending list of magical workings to perform that also needs my attention. One nice thing about living in Minnesota is that the early summer months are reasonably cool and rainy, so there will be a window of opportunity for me to complete some of these workings in the near future. I will also have to begin working and preparing the outdoor grove if I have any desire or expectations of working either pagan liturgy or magic in that space.

Additionally, my girlfriend, Grace will be coming home from her clinical training ordeal at the end of June, so I will be reunited with her once again on a regular and daily basis. During this training regimen, she has been gone for four days out of the week working in a town that is over two hours away, and this started on New Year’s day. She will have completed her last semester of obligatory work and will get her much anticipated master’s degree. It has been a grueling period for both of us, and it has been ongoing since the autumn of 2010. I will be glad to get our lives put back together from all this ceaseless activity and non-stop work, and maybe we might even start having a social life again. Change is coming, and I all I need to do is to prepare for it. I also need to make certain that my time is more wisely spent and efficiently apportioned to all those things that I have been forced to ignore over the last several months.

My terrible illness has at least given me a new sense of urgency and priority. It has been like a cleansing or purifying process for me, and it has taught me that life is precious. So is my time spent on things other than work. I hope that this lesson remains firmly in my mind as I contemplate my next steps in my spiritual and magical workings. I am hoping to have a wonderful summer, full of magical experiences, pagan insights and delights in the rebirth of nature, and a more celebratory and carefree existence than I have had previously. I want to revel in the summer months so that I won’t be terribly missing them during the coming winter as I did previously. While there might be work related projects that I will have to focus on, I am resolved that my job will not so badly interfere with my ability to live and rejoice in the magic and mystery of my life.