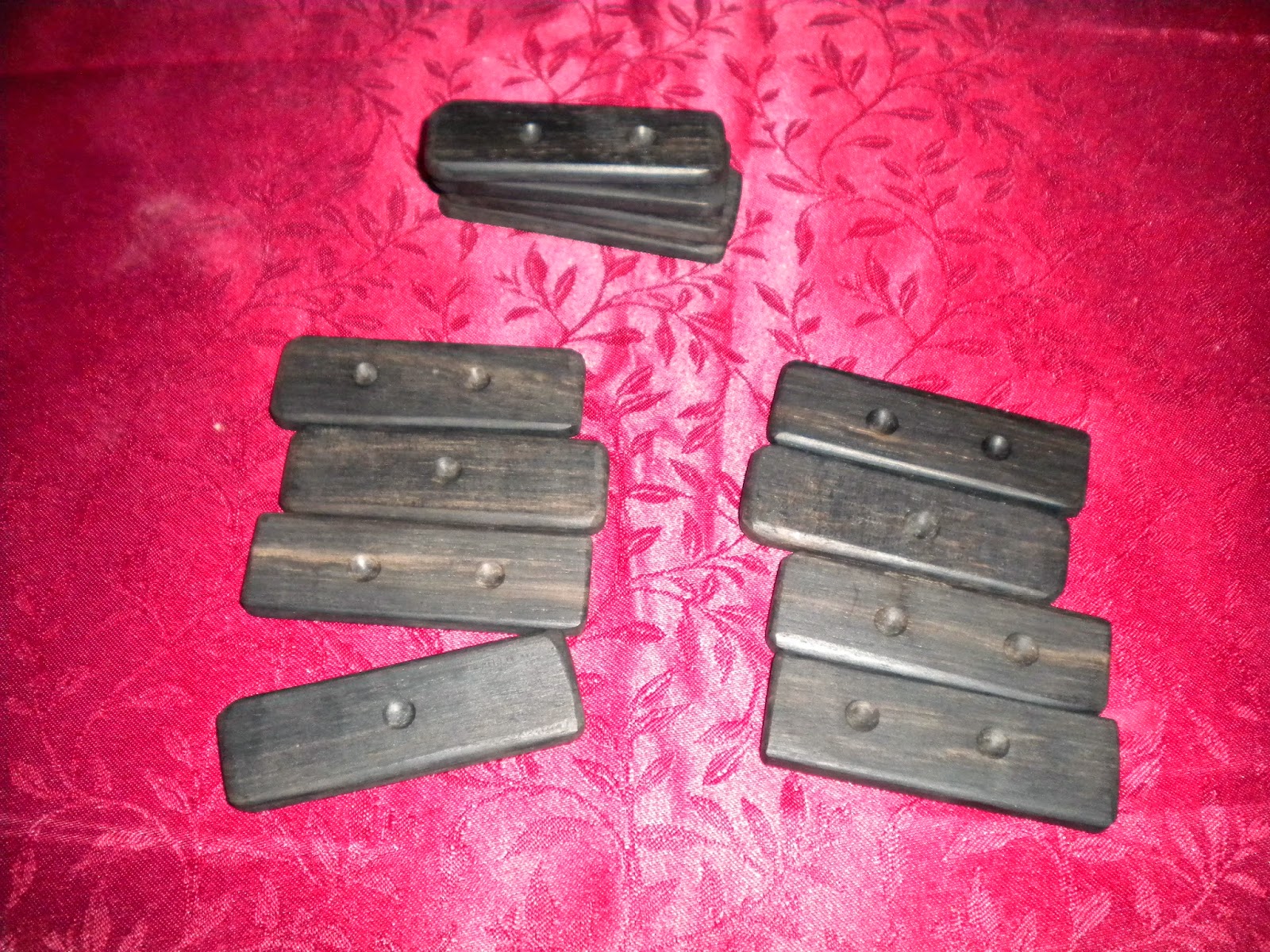 This article is taken from a new book that I am writing about Geomantic Elementals. I decided to share it with my readers to get some feedback about this new way of approaching Geomancy that is very different than what is considered traditional. I am often accused of taking traditional material and profoundly changing it, but I believe that I usually have practical reasons for doing this. Here is my story about how I am approaching Geomancy, and how I intend to repackage it so that it is analogous to other systems of divination and magic. You may disagree with what I am proposing to do, but I hope that I have stated my intentions clearly enough so that you might realize the implications of what I have discovered about this venerable and antique system of divination.


When I was just 18 years old, so many years ago, I had a vision of a system of divination that was based on but differed profoundly from the traditional divination system known as Geomancy. I had been playing around with Geomancy ever since I first got a copy of the book “Mastering Witchcraft” by Paul Huson. I also found it later in the book “The Magus” and Regardie’s “The Golden Dawn,” and since I had made myself some nice geomantic sticks out of ebony in my highschool jewelry class a couple of years previously, I wanted to make use of them. (I still have those same geomantic sticks today, even after nearly four decades of time and use.)

However, for whatever reason, I found the system of single and double dots and the limitation of having just 16 permutations for performing a reading awkward and much too sparse. In order to perform a rigorous and in-depth reading you had to cast enough characters to fill the twelve houses of the old-style astrological square houses diagram, or work with the overly complicated shield chart with 15 place settings. This was done no matter what kind of reading was deployed, whether highly detailed and long term, or just short term and brief. You could also just throw a single character or two, or three to answer a question, but even that was just not enough.

I found this methodology paradoxically a bit too complex on one hand and too limiting on the other. Since I also had recourse to other systems of divination that were easier to use and could produce a deeper and more meaningful reading, I felt that Geomancy wasn’t as useful or as readily available to me. I was, however, particularly impressed with the I-Ching that I had just recently learned, and I was disappointed that Geomancy wasn’t as powerful as that system. Certainly all of the attributes were there in Geomancy as compared to the I-Ching, but they just weren’t arranged in a manner to take full advantage of having the most amount of attributes for a divinatory system. I found myself relying on the Tarot and the I-Ching for my divination needs, and I only used the geomantic sticks to answer yes or no questions, which they seemed pretty good at doing.

Just for my own amusement back in those early days, I had decided to try to approach Geomancy in the same manner as the ancient sages did when assembling and composing the I-Ching. How I did that was to take the instances of two dots or one dot for each of the four levels of the Geomantic character and make them into solid bars and broken bars, just like in the I-Ching.

Once I did that it dramatically and completely changed the Geomantic characters into something much more eloquent and powerful, at least in my opinion. A solid bar consists of two dots and its polarity is masculine and it represents “yes” when performing a simple oracle. A broken bar consists of one dot and its polarity is feminine and it represents “no” in a simple oracle. Two solid masculine bars represents the element Fire and two broken feminine bars represents the element Water. Because the element Air is masculine, it has a solid bar on top and broken bar below it, and the element Earth, which is feminine, has a broken bar on top and a solid bar below. Thus I was able to determine the four elements through the use of two positions of either solid or broken bars, or a combination. 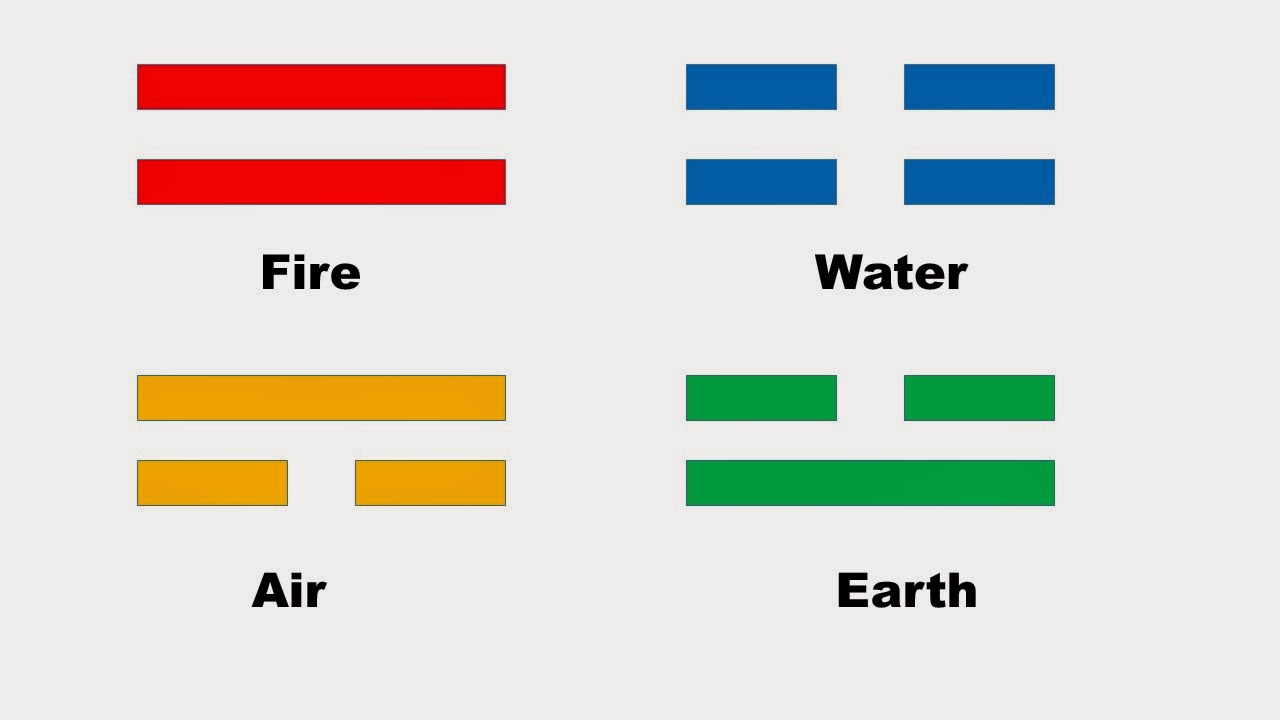 That’s all well and good, but the next thing that I did turned out to be quite surprising. Looking at the sixteen Geomantic characters in their new form of solid and broken bars, I was able to determine for each the combination of elements that they contained within their structure by using the key definition for each element. The use of solid and broken bars made these Geomatic characters look more like I-Ching trigrams, except these were specifically elemental quadragrams, consisting of an element qualifier and an element base. Just like in the I-Ching, I found that the new structure lent itself to combining these quadragrams to formulate octagrams. Now instead of just sixteen Geomantic figures, there were 256 octagrams representing a complete oracular system, just like the 8 trigrams producing 64 hexagrams in the I-Ching. 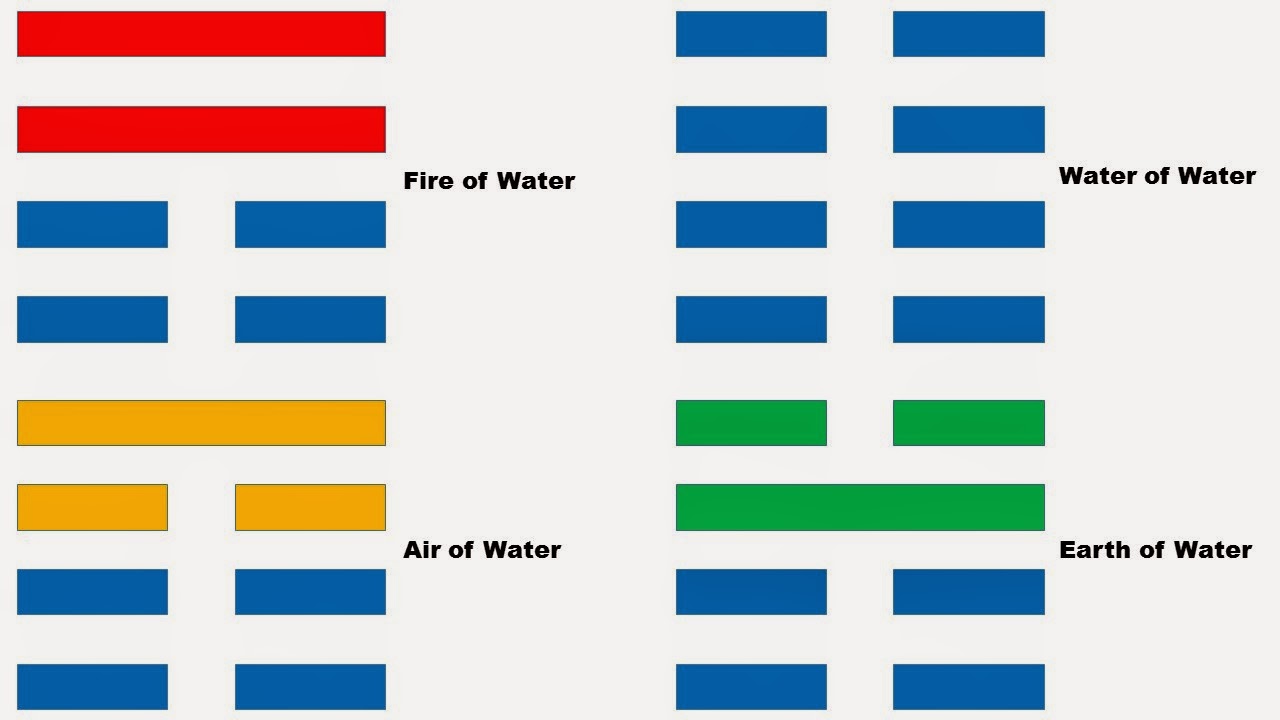 (Example of the Elementals of Water)

Not only that, but I had also determined that with just four throws of my geomantic sticks, I could build up an octagram and also determine if any of the eight lines were changing from broken bars to solid, or solid to broken. This new attribute of changing lines gave me a total of 2,048 total attributes. Therefore, using this methodology that worked so well in the I-Ching, I had produced the potential of a massive, powerful and completely comprehensive system of divination. What was required, of course, was to produce a “Book of Changes” where all of these attributes would be covered at least enough to actually perform readings. On that last task I faltered, since it would have required too much time and a steady discipline to complete. However, now decades later, I feel that I should revisit this system and produce a Geomantic Elemental Book of Changes and bring Geomancy divination into the post-modern age.

Now most people who know anything about Geomancy would probably ask why I would  do this and therefore, radically change an already existing and perfectly vetted traditional system of divination? Who was I to change something that had been effectively used for centuries before the Tarot became popular and replaced it? There are a number of occultists who are attempting to bring the age-old practice of Geomancy back into vogue, and I believe that those who have a fondness for antiquarian occult practices would find my rather radical and creative approach to the subject of Geomancy nothing short of disrespectful, presumptuous and even disgraceful.

Add to that the obvious fact that what I have derived has little in common with the traditional meanings of the Geomantic characters. Anyone who is knowledgeable will be able to quickly determine that what I have proposed is a radical departure from what is traditional and accepted. At that point I will likely be pilloried by my critics for messing with established tradition and they will undoubtedly say that I was “hoisted on my own petard” because I had produced such a monstrosity.  I can hear them yelling for the tar and feathers, too. However, allow me to continue to describe my approach and maybe I can postpone the immanent demise of my reputation.

My approach to Geomancy is first and foremost based on the sixteen Elementals, which we can also find in the sixteen court cards of the Tarot and also subtly represented in the 64 hexagrams of the I-Ching. There are sixteen Geomantic characters, so why wouldn’t they be applicable to the sixteen Elementals? What I have found is that the Geomantic characters aren’t at all the same as Elementals and that means that Geomancy is a separate and distinct system that doesn’t relate (except very obliquely) to any of the other systems of divination.

I found this discontinuity to be strange, but it’s really a matter of either accepting and maintaining what is traditional or looking at an old system with completely new eyes. I chose to do the latter because I wanted a system of elemental divination that was directly related to other elemental systems of correspondence. Perhaps the reason why I had abandoned Geomancy so many years ago was because it didn’t relate to any of the other systems that I was using. A stand-alone system is a lot weaker than one that can be integrated into a larger network of correspondences - or at least that is my opinion.

What I am proposing is analogous to those other systems of divination, but it is also unique, in-depth and comprehensive. Why would someone use my proposed system of Geomantic Elementals when they could use the Tarot or the I-Ching? I believe the answer to that question is to be found in the large number of attributes that Geomantic Elementals contain. If you want an in-depth oracular reading then your oracle better have a lot of attributes in it in order to be comprehensive and thereby to duplicate, in some manner, the vast diversity of the material world.

I believe that the traditional system of Geomancy doesn’t have the kind of depth which is needed in order for it to be a comprehensive oracle, so I proposed adding new levels and dimensions to it so that it could be comprehensive. I also believe that Geomancy became unpopular because it was unwieldy, unrelated to other divination systems and because it was far too thin to be a comprehensive system. Even though I am proposing a radical departure from traditional Geomancy, I believe that it incorporates the best features of the Tarot and the I-Ching. Even so, I will call this new system Geomatic Elementals instead of Geomancy, just so no one confuses what I have written compared to what is traditionally accepted as Geomancy.

Additionally, Geomantic Elementals can be used to perform passive oracular readings or active magical workings. An Octagram consists of two Elementals, so it functions as a hybrid binary or dual Elemental force, which should allow for a lot of magical possibilities and outcomes. In fact such a deep system would be able to respond to any kind of need for a material manifestation, which Elementals are quite effective at producing. Now that we have the hybrid system of dual Elementals, there is the ability to generate a precise magical power that is much more versatile, efficient and effective.

Since I have equated the Geomantic characters to the sixteen Elementals, I can also use the Elemental Enochian Calls to summon them. The method of invoking a dual Elemental would be to use Elemental Pylons set to the four Watchtowers and four Angles, thereby drawing them into the center of the circle at the Ultra-point and Infra-point and thereby generating a fusion at the heart of the center of the magic circle. So, a Geomantic Octagram consisting of a dual Elemental is both a divinatory oracle and a precise magical power. What I am talking about here is a complete system of magic as well as a deep system of divination.