More Thoughts About Evocation and the Reality of Spirits 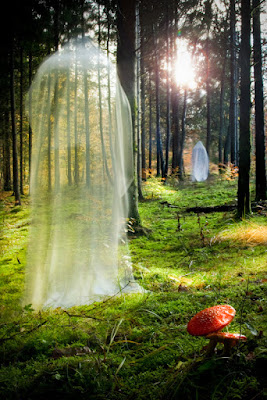 Recently, someone had a problem with my statement that encounters with spirits occurs in the imagination and can emerge into fantasies that make them meaningful and powerful. What struck them was when I used the terms “imagination” and “fantasy” as opposed using the word “real.” I think that there is some confusion when I use these terms in a magical context that causes others, particularly those who are not very adept at ritual or ceremonial magick, some confusion. This is because I am in no way devaluing these experiences by saying that they “appear” and “manifest” to our conscious senses through the artifice of our imaginations. What I am referring to here is the magical imagination, which is quite different although analogous to the imagination that all people employ.

The issue is that some folks think that I am saying that these spirits, whether earth spirits, angels, demons, or even deities, aren’t real. They are imaginary somehow because I have said that they are fully perceptible through the imagination. That means that I must believe that spirits aren’t real, and that relationships with them are not as fulfilling or meaningful as relationships with people. Of course this is not at all what I believe, nor is it what I have said in my various articles. Therefore, allow me to once again define what I think is a spirit.

Experiences of spirits are subjective experiences. They can only be objective to the point where other individuals can encounter them in the same context, which is typically but not always some kind of magical ritual or other kind of mind altering phenomenon. Even when the evocation of spirits are performed with a group of magicians, each one experiences something somewhat different. In some cases the experiences can be profoundly different, in other cases they are quite similar. Still, each person experiences the phenomena of spirits in a unique and different way. Such experiences are always subjective because they can’t be isolated from human experience and subjected to scientific proof or scrutiny. They remain in the anecdotal domain of subjective experiences. I have also found that an individual who is trained or naturally sensitive can have a sensory experience with a spirit under certain and specific conditions. Because of the consistency of these experiences and the fact that individuals can and do have encounters with spirits, we can at least state that such encounters are real. This is to say that from a subjective perspective such experiences are valid and represent a kind of objective reality.

However, the nature of spirits is that they are typically unseeable and unnoticeable until some kind of shift of consciousness occurs in a human being that allows them to be perceived. That perception, though, varies considerably due to the fact that individuals who do encounter them have certain capabilities to perceive spirits. Some individuals can see and observe spirits under certain conditions, while others can hear them and still others can physically sense them. Some individuals who are highly trained or naturally visually sensitive can completely observe, hear and sense spirits.

Still, there is the problem that needs to be answered and that is whether spirits occupy space, have a material mass and exist in some kind of parallel world. My experience has shown me that the full realization of spirits is very rare for untrained individuals, and that in most cases the phenomenon of spiritual encounters is often subtle and barely perceptible. Only under certain conditions does a spirit seem to have all of the qualities of form and material mass, but such manifestations have never been objectively recorded by such unbiased means as a video camera. There are plenty of fake or mistaken apparitions caught on camera, but there have been no verifiable captured images of spirits. Why is this so? It’s because the very subtle nature of spirits can only become fully realized by a human observer when that user employs his or her imagination in a very focused and disciplined manner. This method of wielding the imagination in a disciplined and focused manner is what I call the magical imagination. It also indicates that spirits do not independently possess a material body that contains mass and location in space, or at least not in any way that has been objectively observed or measured by science.

Someone who has an accidental encounter with a spirit could be in a very unique state of consciousness that allows for a full realization of this spirit. This is an incidental occurrence, and it might also be considered abnormal for someone who is neither trained nor actively sensitive. For a magician (or a psychic), the cultivation of exalted states of consciousness is a requirement to consistently encounter spirits and even enter into their domain. This is because the phenomenon of spirit encounters is not a physical one, but one that is perceived through a shift in consciousness.

Spirits are not merely mental constructs or a product of our chaotic imaginings, they have a kind of objective reality in a subjective manner, and they also have a symbolic and archetypal component to their being. When asked if spirits are objectively real (like material objects), I will answer that spirits are both within our minds and also outside of us. They have a reality in our world of consciousness as disembodied beings wholly immersed and resident in that field. Some occultists have said that spirits (as well as magic) are all in our minds, except that our minds are far greater and vaster than we could possibly imagine. Perhaps this is a reference to the world of consciousness where individual points and collective clusters exist, as well as the union of all being that functions as the ultimate foundation and background. There is much that we don’t know about regarding consciousness, and I think that this is still one of the last great mysteries left for humanity to plumb.

This brings up the next point of interest, and that is that spirits exist in a domain that is concurrent but distinct from our own domain. We live in a world that is filled with spirits of every different kind, but we are seldom aware of them because it requires an altered state of consciousness and a disciplined focused perception to even perceive them in a subtle and ephemeral manner. This parallel world is called the domain of spirit, and while it could be said that it occupies the same world that we exist in, we are only aware of it in rare circumstances. Those who can perceive this world readily and in a controlled manner have mastered their ability to sense the different streams of consciousness that are invisible to most people; those who can see this world without any self-control are judged to be insane by society. This is the subtle but distinct difference between magicians and madmen. A magician sees this world and perceives spirits in a controlled manner and at a set time, where otherwise he or she would not sense them.

Magicians apply the environmental stimuli of lamp or candle light, incense, consecrated robes, tools and specialized occultic regalia, various evocations employing foreign and barbarous languages, strange and exotic rituals, and hours or even days of preparation. Yet the one tool that is essential for a successful conjuring is the magical imagination and the foundational state of consciousness established by meditation and trance. If spirits were so easily perceived and encountered then why would a magician have to go to such lengths to summon and make them appear on command? It is because we live in a very mundane material world typically devoid of magic, miracles and spiritual encounters. We can break through the barriers of that world through a disciplined approach at mind control and the engagement of the magical imagination. The psychological power of possibility, the veritable “what if” has the potency to remake the world through the artifice of the empowered and unleashed magical imagination.

While it is true that we live in a world that is bounded by the limitations of physics and natural law, our minds are not so bounded, particularly when higher states of consciousness are achieved. Through inspiration, and particularly through ecstasy, we are able to breakthrough into the domain of magic, spirit, deity, myth and infinite possibility. This is because spirits and deities don’t exist in a vacuum. They exist in a colorful and emotionally empowered world that has a context of mythic and symbolic meaning. Where everything is connected together into a singularity of union - the One. Only because everything is connected together into a tight web of meaningful associations and thereby imbued with spirit is magic even a possibility. In the cold material and autonomous universe without life and consciousness, there can be no magic and no possible connectivity. Such a world is grey, flat, undifferentiated, disassociated and lifeless - but introduce life and consciousness into that world and everything profoundly changes.

In the Old Testament book of Genesis, it is said that Yahweh created Adam so that he might give all the things that God created a name - to fashion a meaningful semantic web that untied all things together. He thus created Adam to add consciousness to the universe, and thus bring the world to life through magic, myth, spirit, and the power of the word. Adam was not content to just passively engage with this world - he hungered for self-knowledge, in other words, to name and know himself. The original sin was therefore not really a sin, it was the beginning of the divinization of humanity that continues to this day. This is because the ultimate aim of self-knowledge is to know that within each human being is a Deity, the Atman of the Hindus. To fully realize that powerful Deity within is to become fully and consciously enlightened in life - to become like a God, and to defeat mortality when death finally takes the body but not the conscious deity within.

Therefore, the key to any kind of spiritual encounter is to know the deity within one’s self, since it functions as the Eye of Spirit that allows human beings to be fully aware of the spiritual domain and all that is within it. Attaining this level of enlightenment is certainly one of the ways that a magician could master the domain of spirit and not require any of the tropes or external mechanisms to summon a spirit or encounter one. He or she would live in both the material world and the spiritual domain simultaneously - there would no longer be any distinction. That, in my opinion, is the ultimate objective of the ritual magician. A magician pursues this objective so that he or she will become all-magic and fully conscious as a god-mind.