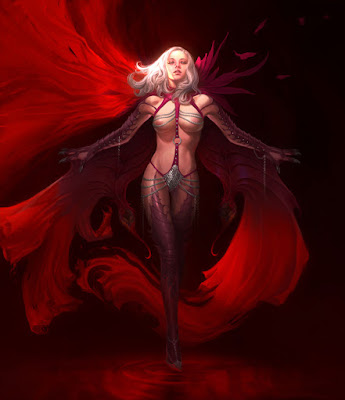 One of my most popular blog articles of all time is one that I wrote on the Incubus and the Succubus. For some reason this article has gotten the most attention on the internet compared to any other, despite the fact that I have basically dismissed this kind of encounter as a poor surrogate for the real thing - sex with a human lover. I was bemused by this strange popularity and I couldn’t figure it out, until I found by accident that there is a whole cadre of lefthand path magicians (mostly male and typically young) who are advocating and even boasting about these kinds of encounters. Not being a Christian or a member of the Abrahamic faith (nor an avowed Satanist), I find these kinds of sidelines to be strange artifacts of a previous epoch. Really, if it wasn’t for the fact that we live in the post-modern age I would swear that the middle ages are alive and well.

So it seems that getting your kicks from an incubus or succubus encounter is something of a fad amongst some young LHP magicians, and it is even advocated and hotly advertised by someone with the stature of Eric Koetting. I discovered a rather hyped You-Tube video where Eric expounds on the topic of how to have sex with an incubus or succubus. You can find it here. There are, of course, plenty of other examples out there in the Internet (such as the Goetia Girls et al), but I will leave the gratuitous searching to those who are looking for amusement or titillation. This is a subject that doesn’t particularly interest me, most likely because I have found that “real” sex with a real woman is for me much more profound than engaging in some form of mental (or real) masturbation. I would also have to say that a long-term relationship is much more interesting and rewarding in life than some sweaty, quickie grope, grind and release. I am not against sex, and in fact, I am really quite in favor of any kind of “real” sexual encounter that is legal and based on mutual consent.

Don’t get me wrong, I am also a fan of erotica in its various forms, and in fact, my lady and I engage in the sharing and perusal of such media. However, we see it as stimulating fantasies not to be confused with the reality of human sexual relationships. I would suspect that this kind of reality is foundational to all persuasions and types of legal and natural human interactions. Sexual activity can be a great good, and it is also healthy for people to engage in it and thoroughly enjoy themselves. Sex can also be the means to higher states of consciousness, and there is such a thing as sacred sexuality. Since we all have within us an aspect of Deity, then consensual sex between loving individuals takes part in the union of Deities in sacred emulation of the One. That is how I see and personally define sexuality.

Fantasy, and sexuality in the mind, is an important and powerful component of physical sex, as well as many other creative endeavors, such as magic. It is often said that good sex starts in the mind where is it is empowered and amplified over time before it becomes a reality. Some fantasies, though, should probably remain in the mind and not be pursued in physical reality. I will leave that kind of judgement and discretion to the reader to ponder for themselves.

I do admit that I have had powerful erotic experiences in my magical workings, particularly when I have encountered various aspects and manifestations of the Goddess, to whom I am a spiritual and magical devotee. Most of those kinds of events occurred when I was younger and more sexually vital, but it is something that I have experienced in later times. However, that is an encounter with Deity, and the love relationship between the Goddess and myself is an important and powerful part of my spiritual and magical work. It can be inspiring, thrilling and it can even be terrifying, but throughout, it is a component of Deity that I can only experience through my own particular Godhead, or Atman. It is not a surrogate for a real human relationship, and it is not something that I can even talk about in any detail because it is so intimate and profoundly meaningful to me.

Perhaps that is what Eric and other LHP magicians are talking about when they get into discussing their sexual encounters with spirits. Angels and demons have a mythological history of cavorting with human partners, and there are many other examples in the religions of the world today. Still, without the same degree of reverence and sacralization, I doubt that these experiences are the same as what I have experienced. For me it is the conscious realization of the union of human and deity, occurring as it does through the medium of the higher self, or God/dess Within. I now realize that it is a manifestation of my Atman through which I have had powerful visions of sexual union. It produces in me a kind of exalted spiritual ecstasy. Through these experiences the poetry of Rumi, Kabir, Hafiz and others is powerfully acknowledged and realized. I am exalted by these occurrences, but I must also admit that they happen to me without necessarily being sought or pursued. The spiritual lover that Rumi discusses in his poetry is, of course, God, and it is the profound submission to this love that brings forth spiritual ecstasy and the visionary experiences of the highest states of consciousness.

Having had these kinds of experiences, I still sought for a life partner and life-long love, and I feel lucky and grateful that I found her. Receiving the love of the Goddess is a profound experience, but living in a loving relationship with a woman is a profound fulfillment of that spiritual connection. I believe that this is also true for anyone who is a lover, both on a physical and spiritual level, and their beloved, whether of the opposite or the same gender. Love is love, and the freedom to love is the greatest of all freedoms. Yet true love, especially the love of God, requires the lover to submit to that love in order to be exalted. It is a profound paradox, but it is also a great truth.

What I don’t see happening with the LHP obsession with the incubus or succubus is anything remotely like what I have experienced in magic or in life. I have received comments from readers telling me about their passionate encounters with spirits, demons, angels, or whatever, and yet they don’t seem to be exalted, transformed or even fulfilled by the encounter. It makes me sad to read these comments and emails because what it says to me is that there are some very lonely and desperate individuals out in the world who are seeking love and have only found it in their imaginations. They seem to project that imagination somewhat into the physical world, but it is not reciprocated by a real human lover - it remains a shadow of reality.

Anyway, I can’t judge such individuals because I am not wired in the same manner. What I do believe is that what they are doing and experiencing is not even meaningful to me. It would be like having a romantic evening with a blow-up doll, and not a particularly good one, either. It is just ego inflating and seems like just a form of mental masturbation. I guess that I have failed the test to become a bad-ass LHP magician because I find this kind of activity to be silly and juvenile. Maybe others see it as cool and spunky, but to me it is empty and vain.

I hope some of the folks who have been avidly reading my article on demonic sex will realize that I think it’s not cool and awesome. It is, in fact, nothing more than some moronic juvenile activity that allows those who pursue it an excuse for seeking and obtaining a real relationship with a human being. I rest my case.

Posted by Frater.Barrabbas at 6:16 PM