Temporal Model of Magic and Gods of Time 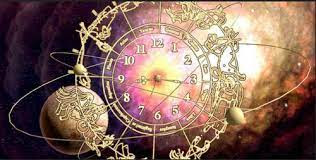 In my forthcoming book, “Talismanic Magic for Witches” I talk about a new magical model that I recently discovered that explains the magical efficacy of what I call the talismanic equation. There are basically two parts to this consideration. The first part promotes the idea that the best and most stable talismanic force is one that combines both a planetary intelligence or archetype with an element. The second part is that incorporating the attribute of time through the use of the planetary day, hour and the astrological auspices of associated transits occurring when the magic is to be performed places that working into a more powerful disposition than if one were to ignore time altogether.

The first part is based on the concept that a mind and body joined together has greater utility than a mind without a body, or a body without a mind. In talismanic magic, the mind part is the planetary intelligence and the body part is the element energy, and when joined together creates a self-sustaining magical field. You can, of course, work planetary magic without adding an element to it, but there is something special about the energy and the intelligence when combining the two together.

A talismanic field that consists of both a planet and an element represents a kind of magical force that is intelligent (guided) and empowered (embodied) to a specific purpose. Such a magical force is radiant, and, I might add, perpetual. A planetary intelligence attached to a godhead archetype and fused within an element envelope that is continually charging it will continue to radiate its magical effect practically forever, or for as long as the talisman is maintained. Thus, talismanic magic is unlike any of other form of magic.

To ground and preserve this perpetually charged and active magical force, it is projected into a metallic body that is inscribed with symbols and sigils denoting the qualities and authorities (spirits) used to generate it. The importance of using a metallic body for containing the talismanic artifact is to ensure its longevity, since other material containers would be subject to the ablative effect of time and use. As long as the owner of the talisman maintains a mental link with the talisman, it will continue to operate perpetually. A talisman can be destroyed by destroying the base in which it resides and disbursing its energy, and it can become dormant if lost or unused for a period of many months. A dormant talisman can be easily awakened when merely summoned and focused within a consecrated space.

Talismans can be created through a process of either active or passive magical actions. The active magical process incorporates a star polygon, such as a hexagram or a septagram. It uses the same methodology that is used to generate an element using a pentagram. Drawing the lines of force of a star polygon will produce the energy and intelligence of a specific planet or zodiacal sign. This can done at any time such a field is needed in a magical operation.

The passive methodology relies strictly on the astrological auspices of a given event to invoke and thereby focus that quality on an object or person. It teaches that merely exposing and invoking a celestial quality at the right time will suffice to complete a magical operation. An elective astrological chart is often required, along with the use of the planetary day and hour. Using the active magical approach overrides the necessity for predetermining the astrological auspices and selecting the best time, and many people work planetary magic using this approach. The passive approach has its benefits, and some would argue that it is superior, since it incorporates the omens and portends of a successful outcome. However, it requires more than a working knowledge of astrology and it is locked into a specific time and location to take advantage of a celestial event, thereby limiting when the working can be performed.

A magical  rule to consider whenever approaching magic that uses celestial objects, such as planets, is that there is a greater impact and long-term effect to be gained in the magical working when the factor of time is considered for such a working. When I am referring to time, I am, of course, referring to the event of the working, when it is performed, where and under what conditions. There is an important archetypal factor at play when the ritual magician incorporates time into a working. Not only are there the symbolic auspices at play, such as the planetary day, hour and associated astrological transits that link into the operator’s natal chart, but there are also the nature and qualities of the deity of time itself. There is also a magical model called the temporal model of magic that is also at play as we shall see later.

Planetary magic is more effective when the planet is combined with an element, to produce a matrix of twenty-eight empowered spiritual intelligences. However, some folks can just work planetary magic without combining the planets with elements and produce an effective method of magical workings. Similarly, a ritual magician can use a star polygon to generate a planetary force and summon the angel or archangel for a working whenever needed and set that working to make a change in the physical world.

Yet this kind of magic is no different than performing an elemental working or an evocation. It is a single event that seeks to produce a very specific outcome. Using a planetary force and its associated angel or archangel might have different qualities than performing other kinds of magic, but it is really no different than just summoning an angel or archangel to help one successfully materialize an objective. All of these methods of magic require mundane steps to help the working to produce the desired results, and the more extensive these steps, the more likely the outcome.

It can been seen that combining a planet with an element would likely produce a more effective outcome because it generates a talismanic field that is constantly working, day and night, practically forever. Since the talisman is constantly working on an objective, there would be less mundane steps needed to ensure a successful outcome. Additionally, if the event of generating that talismanic field is governed by a careful selection of astrological auspices and incorporating the planetary hour or day into the elected date of the working then the effect of that working will likely require even less or no mundane steps to ensure success. Combining these three magical actions together, active generation of the planetary quality, empowering it with a base element and performing the working at the most auspicious time will produce a magical artifact that will be superior to using any other methodology.

You can imagine what could be possible if a ritual magician constructed, generated and charged a series of talismans, each to handle a specific aspect of his or her life, and arrayed them altogether in a sacred place in the home. It would be like creating a “charmed” life for the individual, where misfortune is blunted or even avoided, and good fortune amplified. Creating such a treasure of talismans operating in one’s life would certainly obviate the need for working any other kind of magic, at least for material gain and the blessings of good fortune. This would certainly put someone into the place where they could focus on working magic to expand their knowledge and quench their curiosity while the talismans would handle all of the material based concerns. Not only is this a possibility, but it is one that I have crafted for myself, and so far, it is working and greatly aiding me at all times.

What makes this kind of talismanic magic so potent is the underlying powers and effects of the archetypes, myths and the deity of time itself. It is called the temporal model of magic, and it is one that we should pay close attention to whenever we work any kind of magic.

The temporal model of magic is succinctly stated that when a ritual is performed, that moment in time becomes profoundly significant and auspicious. It places an indelible mark upon the operator’s time line. The more important that ritual working is then the greater its significance and auspiciousness. This event of magic becomes similar to the event of divination, or the event of casting an astrological chart. That event, in of itself, causes a change, whether imperceptible or profound, in the life of the operator. This is because the event triggers the layered occult symbology that is part of our cultural collective, and this causes a transformation of consciousness for everyone connected to that event.

Therefore, it would be highly prudent for a ritual magician to recognize the temporal model of magic working in their practice and to be mindful of the astrological auspices operating when choosing the moment or event of a magical working. The connection to elective astrology or even horary astrology should be evident when considering the efficacy of choosing the optimal time and place to perform an important magical working. There are reasons for this opinion that go far beyond the astrological auspices of a given moment.

The core of the temporal model of magic is the Deity of time itself, known in some circles as Chronos (not be confused with Kronos, the father of Zeus). Chronos is the Greek word for time, but as a Deity, he did not have a shrine nor was he part of the civic state religious cult. Chronos was given an important role in the writings of an early Presocratic philosopher Pherecydes, who was a contemporary of Pythagoras (6th century CE). For the perspective of magic, Chronos is considered a lintel deity who symbolizes both the beginning and end, and the gateway that leads from the past into the future. He is, therefore, similar to other lintel deities, such as the Roman Janus, Herne, Eris, Saturnus, and Laverna, or the Persian God Zervan, to mention a few. He is both the Lord of Misrule and the embodiment of the Celestial Order of continual change.

Such a deity represents the mystery and the magic of the greater potential of change, and the spark of fate or destiny that can be generated for the benefit of the magical operator. It is necessary, then, to give homage to this mysterious and multiform godhead so as to aid a specific magical working, especially a celestial working that incorporates astrological auspices. A simple rule to understand about this kind of magic is that the more the operator knows about the moment and event of the celestial operation, and the greater the focus on performing this act at the best or most auspicious time will ensure that the results will be in accordance with the magician’s objective. It would seem, therefore, that time and the temporal model of magic can help a magical working, or any kind of magical operation, to be more effective and profoundly meaningful.

Posted by Frater.Barrabbas at 9:42 AM