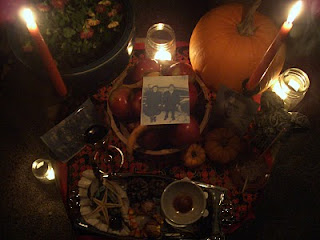 I wanted to take a moment and wish everyone a very happy and safe Samhain/Hallows for this year. For some, this represents the boundary of a new year, where the old year has died and the new begins to emerge. It can be a time of reflection, insight, remembrance of those that passed - both recently and further away in time. It is a time of commemorating those deceased that we admired, emulated to some degree, or even accepted as mentors. Having a spiritual or occult mentor is truly an important feature in the life of an occultist, witch or ritual magician. However, that mentor doesn’t always have to be alive in order for one to find their work inspirational and deeply meaningful.

Dead mentors are probably almost as important as the living ones, since they offer us a legacy without any real strings attached. For me, three individuals have acted like unwitting mentors to me over the course of my career as a witch, occultist and magician. These three individuals are, in order of importance, Alex Sanders, Aleister Crowley and Samuel Liddell MacGregor Mathers. There are other authors and teachers who have had an impact on me (and who are no longer living), but these three have had the greatest impact on me in regards to my studies and practices.

Alex Sanders was probably the most flamboyant witch and ceremonial magician in the mid to late 20th century since Old Gerald himself. Alex freely mixed practical Gardnerian witchcraft with the Golden Dawn system of magick along with parts of the Solomonic grimoire tradition. In many ways, Alex pointed the way for me to proceed in my own spiritual and magickal travels. Even though I was initiated into the Alexandrian tradition on Candlemas, 1976, I never got the chance to meet Alex or Maxine Sanders while they lived together in London in the 70's. I had an acquaintance who met them and even briefly circled with them as a guest, but I never got the opportunity to travel to England to meet them myself. (Some who knew him well have told me that this was probably a good thing, since Alex was reputed to be a very “naughty” boy.)

Alex left behind very few writings, and from what I was able to determine from his written lectures and what others who knew him said about his studies, he was much more of a classical occultist and trained medium than I am, since he readily mixed eastern philosophies, Theosophy and spiritualism with his practical workings. However, Alex was quite an experimenter, and was attempting to fuse a number of different fragmentary systems of occultism together, to create his own version of a pagan system of the Golden Dawn. He lionized the use of the Rose Ankh, which he saw as a replacement or addition to the Rose Cross. Still, the many pictures of him and Maxine, and the books by Stewart Farrar, particularly the first book, “What Witches Do,” and the more nonsensical biography “King of the Witches” completely captured my imagination at a very young age. I can say that my personal and public systems of ritual magick owe a great debt to Alex Sanders – so to that end, I am thankful that he lived and made such a name for himself. It inspired many others to pursue their own path of witchcraft and ceremonial magick, especially me.

The next individual is Aleister Crowley, whose writings and books are an important part of my personal occult library. I have studied “Uncle Al,” as I like to call him, quite rigorously, and have found many of his essays, books and rituals to be highly informative. What I am not crazy about is how Uncle Al lived his life and dealt with people. I have also found some of his writings to be purposely misleading and perhaps even a bit harmful if taken literally. I, for one, would not see any purpose to cutting my arm with a razor blade every time I happened to utter the first person pronoun – this would certainly not, in my opinion, lead one to adopt a humble and ego-less state of mind. I also do not consider myself a Thelemite, nor do I see the “Book of the Law” as holy writ. You won’t find me parroting out of context tracts from that work. I do consider the Book of the Law to be an inspired work, just as the book “Vision and the Voice.” But inspired works are to be analyzed, not enshrined as items of worship.

Since I am not a person of the book, as it were, then I wouldn’t accept any writings as either holy or inviolable. Still, I consider Aleister Crowley to be the father of modern paganism and ritual magick. He was the first who proposed making the adoption of a godhead the principal practice in the art of magick, as he often would fully assume the godhead of Horus when he worked it. Witches and modern pagans have taken this practice to an even greater extreme than Crowley would have allowed, which has both points for and against it.

I was first introduced to Crowley’s writings when I was a teenager, which was a time when a lot of his books and writings were being reintroduced to the western world. After all these years, I still find myself going back and reading over his writings. Whether I agree with his personal lifestyle or fail to believe that he was some kind of occult messiah, I still find a great deal of value in his writings, therefore, I owe him a debt of gratitude.

A few friends of mine, some of whom are Thelemites, have agreed that if we could have actually met Crowley in some manner, we wouldn’t have liked him. Crowley was arrogant, cruel to his friends, allies and followers, abusive to his lovers, and an all around nasty fellow. He grew up wealthy and privileged, but died a poor man with a terrible Heroin addiction. While his personal life is not one to recommend to anyone, his writings stand out for all time. For the sake of his writings, I am grateful for his contribution to the practice of ritual and ceremonial magick.

The final individual that I feel an affinity and respect for is Samuel Liddell MacGregor Mathers, another giant in the annals of western occultism and ceremonial magick. Mathers was responsible for the formulation and establishment of the Golden Dawn organization. It was Mathers who brought the practice of magick from where it had been left in the 17th century into the late 19th century.

Mathers was an excellent scholar and researcher in his own right, and his unwitting legacy stands the test of time. I say unwitting, because Mathers would not have agreed with the Golden Dawn materials being published, and he unsuccessfully attempted to stop Crowley from publishing that lore in the Equinox. After that incident, the flood gate was opened, and there was nothing that Mathers could do to stem the tide. He passed away in the post WWI influenza epidemic that ravaged Paris and he didn’t live to see the fruit of that unwarranted publication. A few other of Mathers’ personal occult manuscripts were published by Crowley, and these, along with the Golden Dawn corpus and the few of Mathers’ legitimate publications represent a massive collection of transitional documents, showing how the occult lore of the earlier modern era was evolved into a system that is both elegant and workable today. Mathers’ legacy to the modern practice of ritual and ceremonial magick is virtually priceless, since the Golden Dawn has spawned a multitude of magickal and pagan systems throughout the western world.

I have often given Mathers a great deal of credit for starting the modern occult revolution of the 20th century, particularly in regards to the practice of magick and western based occultism. Little is actually known about Mathers and his life, and the various pundits and biographers who have written about him have not been very kind to his memory, beginning with Crowley himself. I would suspect that Mathers was a completely honorable man who steadfastly subscribed to the proper chain of transmission and secrecy inherent in the occult orders and organizations of the 18th and 19th centuries. That many no longer hold these values and beliefs as sacrosanct does not in any way diminish Mathers, his accomplishments and his steadfast belief in the Order that he had helped to found. Whether one believes that Mathers had contact with the secret chiefs or not, no one can dispute the legacy that he gave to all of us today who practice ceremonial or ritual magick with an initiatory basis. I suspect that if he were able to witness all that has happened to his lore over the last century, I think that he would have seen it as a positive manifestation of this genius rather than an abhorrent aberration to be condemned. He would not have agreed with the manner of the transmission of this lore, but perhaps would have consigned himself that its revelation did indeed help start a powerful cultural and spiritual movement. That effect may have been the over arching purpose as to why the revelation had occurred in the first place.

So, these three luminaries are ultimately but not directly responsible for the fruit of my studies and the system of magick that I have forged. During this time of honoring the dead, I shall light a candle and say a Mass for all three of them. They have helped to make my practices and beliefs truly realized, and for this fact, I am deeply grateful.
Frater Barrabbas
Posted by Frater.Barrabbas at 2:11 PM