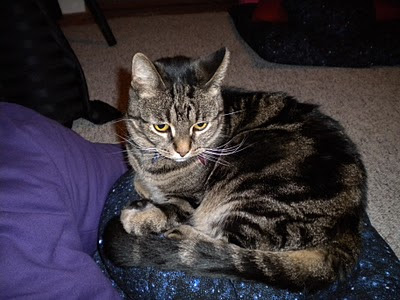 Meeoow! My name is Jynx, and I am Frater Barrabbas’s cat. FB decided to take a day off from writing his blog and turned it over to his wiser half, his cat. Humans would classify me as a seven year old brown and grey tabby with some black marbling and a white chin and throat, but I would find that rather limiting. There’s so much more to me than what my lovely green eyes and cover-cat face would indicate. I am, after all, a sorcerer’s cat! That means that I am usually skulking around the background making certain that Frater Barrabbas’s feeble attempts at working magick actually turn out to be successful. Behind every accomplished sorcerer there is a feline assistant, make no mistake about it. If you are an occultist and don’t have a cat or two in your household, then you are either grossly incompetent and don’t realize it, or you’re a complete fraud. Cats are integral to the practice of sorcery, or at least that’s what my supposed master would say. I just know that I am prime to all things - nearly like a god. (Yeah, I like that saying!)

I am sure that you all know the history of cats, how they were rightfully worshiped in Egypt, and that every major breakthrough in human history has happened because there was a cat in the background manipulating events. What you might not know is that we cats do communicate with each other, comparing traits of our masters and mistresses, sharing secrets, stealing ideas, making basic world-order mischief, and plotting to be the next king or queen of the cats. Sometimes we disappear into other dimensions and congregate together, attempting to keep the world from flying apart in total chaos. It’s a tough job being a cat, so that’s why we sleep a lot during the day - we are working at night to make the world better place for humans. However, try as you might, you will never get a cat to reveal their secret gateways, grips, signs and pass words to those mysterious places. Sometimes we may stare at strange corners in the ceilings (gateways to other dimensions) or cock our ears to listen to the ethereal music of the spheres. Cats are very important factotums to the phenomena of mysterious and magickal forces that rule the cosmos - dogs, on the other hand, are about as worthless as humans can sometimes be.

I happened into FB’s life as an unintended unclaimed pet. My former mistress despised me and wanted to leave me stranded at her prior home. Frater Barrabbas made sure that I was moved into the new household, since he immediately saw my tremendous value as an occultist and fell for my great good looks. I am, after all, a very handsome cat with an unusually long striped tail. Later on, when my former mistress and FB broke up, I got the house and my master all to myself. It was a halcyon time for the two of us, only to be rudely interrupted when his new girlfriend moved in with a large stupid dog (who thinks he’s a cat) and two rather obnoxious cats. I was, to say the least, quite put out by this change of fate!

I had helped my master heal from major surgery, never leaving his side while he recuperated, and purring softly to help heal his innards. He rewarded my faithful and unconditional love by allowing more pets to invade my home. A fourth cat was allowed to invade my space later on, which was about all I could stand. FB made it up to me and coddled my anger and soothed my upset feelings, making sure that everyone knew that I was loved the most and was still an alpha cat, even though I was getting picked on regularly. He was my hero, so I forgave him, well, sort of. Now everything is mostly fine, except for that fourth cat called “Faust” who continues to pick fights with me, although this usually doesn’t happen unless I get in his face and annoy the shit out of him. Typically FB intercedes, even if it’s my fault - I do love that about him. The dog is OK, too, since he’s big enough to offer token protection from the other cats, and so is FB’s girlfriend, who has learned to stroke me in the right places.

Frater Barrabbas is a good guy, I have to admit. He feeds me special treats, often picks me up to cuddle (although I am just as often not interested in this kind of affection), and intercedes when the other cats in the household attempt to gang up on me for no apparent reason. These other cats might consider me an arrogant prick, but then, I am the highest of the high, since FB favors me more than any of them. They just haven’t gotten used to the real pecking order, even though I try quite hard to make sure that they know it. So, because FB is good to me and treats me nice (most of the time) I deem to allow him certain liberties. He can give me treats (pork is much more coveted than other goodies), scratch me on my flanks and skirtch my head, stroke my whiskers and gently rub my chin, and let me stretch out next to him and hog the bed or chair. I will then be ameliorated to put up with his obvious flaws, such as his periodic flatulence, stinky toilet interludes, reoccurring bad breath, loud and raucous snoring, constant body odor and numerous other fairly offensive traits. He is anything but perfect, and like all humans, kind of an inept moron that I am constantly inspiring, guiding and teaching. It’s hard work being a sorcerer’s cat!

I will admit that he can strategically scratch my sides, gently pull my tail, and scratch that area of my back where the tail and the spine meet (a place I can never reach myself) in such a manner as to induce a euphoric trance of purring and pleasure. His only fault in doing such wonderful service to me is that he often stops and mindlessly wanders off to do something completely irrelevant - so I have to follow him around and re-engage him until I feel that the job has been done to my satisfaction. Frater Barrabbas has the kind of touch that can turn most cats into pudding after a few minutes of his attentions, this I will admit. And it also really annoys me that he will use this skill on other cats - what a philanderer! There is only one Jynx the magnificent, and he would be better served to administer his talents solely upon me - that is, if he wishes to continue to be known as a competent ritual magician. After all, I secretly taught him all of the really hard stuff that he would never have gotten if it wasn’t for me. 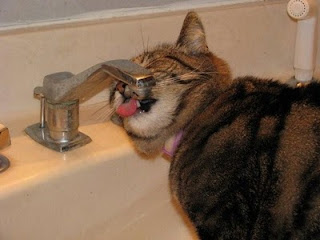 By the way, I do love water - to play with, not to be totally immersed into. My master has put our communal water reservoir into a plastic bin so as to catch the splashes that I love to make. Also, all of the toilet lids are typically kept closed so I won’t have fun with the water found in them and make a mess (it all dries up eventually, so I don’t know what the fuss is all about). I also occasionally visit the sink in the bedroom and enjoy a bit of the leaky faucet drip from time to time. When I am all wet and sloppy, I like to dry off on my master’s lap - he’s so understanding sometimes.

What I don’t like is the pet door that allows all of us household cats to come and go whenever we like to - not that I don’t use this device whenever I feel like it. I would prefer to be let in and out through the door or bedroom window, especially in the middle of the night when it’s raining out. I paddle the bedroom window from outside for several minutes in the dark of the night, but for some reason he never comes to my rescue. If anything, I have to use the cat door as if I were just like the other cats. That does bug me from time to time (like last night), but I try to be a good sport about it - besides there are a lot other ways that a cat can get revenge. Like the time that I pissed on FB’s shoes in the closet to let him know that I didn’t like the fact that he let yet another cat (a stray, and the fourth, for god’s sake) live in my house.

Another thing about me is that I am a great hunter - mice, birds, voles, moles, gophers, squirrels and chipmunks all know how terrible and lethal I am. I like to eat up some of these critters that I kill and then leave the bloody bits in a corner of the house for my master to find. I have left him various offerings from time to time, and they do disappear, so he must be secretly enjoying them. (I do like to accommodate him in this fashion whenever I can.)  I also have been known to bring a live bird into the house on occasion that flies around until it finally finds a way out. I guess that’s my way of letting Frater Barrabas know that a pet door swings both ways.  I also have a habit of pulling down the funny rolls of paper conveniently located in the bathrooms into a small pile, and then chewing it to form some very interesting paper sculptures. Someday, if you happen to see one of my works in an art museum, you will know that I first told you about it here.

Quite frankly, I don’t see what other occultists see in FB. If anything, they should be reading my writings instead of his, since I am the one who taught him everything he knows! (I only taught him what cats are allowed to teach humans, so there’s a lot of other magickal and occult lore that I know which can’t be shared.) Cats are secretive, inquisitive and all-knowing, so if you are nice to us, maybe we will help you become a great sorcerer, too. Remember, bribes in the form of nice bits of pork or other human meats are the passport that you will need to obtain complete and total success in all things regarding magick. Of course, you will need to first get a cat so you can spoil and bribe it properly.

Anyway, so now you know the truth about Frater Barrabbas and his fantastic muse and constant source of inspiration. He hasn’t dedicated a book to me yet, but I can forgive his thoughtless and forgetful ways because I love him, all for reasons that seem to mystify even me. Next time you read one of his articles or books, or attend one of his workshops, just remember that whatever he is attempting to communicate to you was inspired and derived from me - I am his greatest teacher and confidant.
Yours truly - 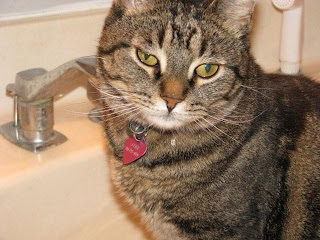 Posted by Frater.Barrabbas at 2:52 PM