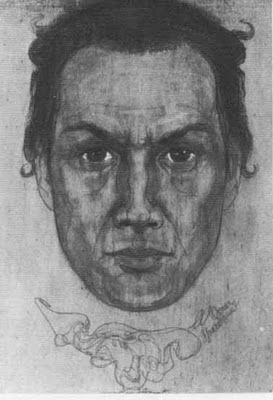 I recently discovered that Kenneth Grant, a noted and somewhat famous occultist and writer, had passed from this world to the next. Mr. Grant died on January 15, 2011, although many of us were not aware of it at the time. So I am putting together this brief eulogy to celebrate his great accomplishments and to note his passing at the ripe old age of 86. (Kenneth Grant: born 1924, died 2011.)

Mr. Grant was probably best known for his Typhonian trilogies, a series of 21 books that examined the dark side of occultism and magick. Grant was probably one of the first to attempt to give African Religious Traditions an occult context, and he also lionized, for a short time, the obscure and infamous occultist, Michael Bertiaux. He also was one of several individuals who claimed, for a time, to be the Outer Head of the Order of the O.T.O., a claim that produced a rather famous series of law suits, which in the end, he lost. Grant also knew Aleister Crowley during World War II, although that time period characterized Crowley’s declining years, both as an occultist and an elderly man. Crowley died in 1947, but the youthful Grant lived on to take up the torch of Thelemic magick, and to cultivate and evolve it into a profoundly post modern perspective. Grant also knew and was friends with Austin Spare, another amazing pagan occultist and artist.

At the present time, I can’t recall anyone else who was such a masterly proponent of the Lefthand Path than Grant, and his books very likely inspired a whole generation of LHP magicians and occultists. It was through Grant’s books that the Left Hand Path took on a particularly irresistible glamor. However, many of Grant’s techniques used to link together various obscure practices and beliefs were tenuous at best, fictional fabrications at worst. Grant also took the literary creations and fantasies of the infamous Lovecraftian Chthulhu Mythos and brought them into a supposedly respectable occultic context, which became rich fodder for chaos magicians everywhere. He was also deeply involved in resurrecting the writings and artwork of Austin Spare, and probably singlehandedly kept that work from succumbing to complete oblivion. His wife, Steffi Grant, added her darkly themed ink drawings to the burgeoning collection of “night gallery” artwork, which was always included on the cover and in black and white picture prints in the middle of each book. This artwork had as much impact on readers as the various odd and obscure occult concepts that Grant sought to darkly illuminate in his books.

Grant left a powerful and irreparable stamp on the practice of ceremonial magick and occultism, and those who practice chaos magick, emulate the practices of Austin Spare, seek to integrate ATR beliefs and practices into their western occultism and magick, develop a system of magick based on the Necronomicon and the Chthulhu mythos, practice lefthand tantra, or who seek a deeper understanding and appreciation of the writings of Crowley, owe him a great debt of gratitude. Grant seemed to leave no stone unturned, and he managed to forge together the dispirit threads of post modern occultism, science fiction and fantasy, horror fiction, exotic ethnic traditions and obscure antiquities, producing a blend of dark occultism and Lefthand Path practices. If you have even the faintest attraction to the dark side of occultism and magick, then Grant is likely your spiritual godfather, whether or not you have read his books.

I started to collect and read Grant’s books back in the late seventies, when the “Coven from Hell” that I belonged to decided that it should branch out into lefthand path occultism and magickal practices. I had to start with his first set of books that were already in print, but soon caught up and read every book up to a certain point. I recommend several of his books, which I consider to be classics and important reading material for anyone who is interested in having a well rounded occult background. The following list of works authored by Grant are just a small part of my recommended reading list, although some may be out of print, very expensive or quite difficult to find.

“The Magical Revival” (Weiser 1972) - This was Grant’s first book that set the tone for all of the books that were to follow. At this juncture, Grant was interested in extending the occult concepts and practices of his mentor, Aleister Crowley. He also introduced to the world the writings, artwork and practices of Austin Spare.

“Aleister Crowley and the Hidden God” (Weiser 1974) - The second book goes further into producing deeper revelations of the Thelemic current, focusing on aspects of sex magick, dream control, the Qliphoth and left hand tantra, which is a part of what Grant calls the “Ophidian current.”

“Cults of the Shadow” (Weiser 1976) - The third book breaks the ground of revealing the background and connections of the infamous and secretive Lefthand Path, including forays into various African religious and magickal practices, Voudoun (with an emphasis on the Petro rites), lefthand tantra from India (Vama Marg), and numerous other reputed traditions both east and west that were infamously tainted with the lefthand path. It is in this book that Michael Bertiaux is introduced to the occult community. Grant even went so far as creating an African version of the Tree of Life, something that Bertiaux had also been working on.

“Nightside of Eden” (Muller 1977) - The fourth book is probably one of the great classics of lefthand path occultism. It is in this book that Grant attempts to pull together a complete system of the Qliphoth with all of its associated symbology and chthonic spiritual entities. Grant’s main premise is that the Qliphoth is nothing more than the backside or unconscious shadow of the Tree of Life, and that a knowledge of the Qabalah is incomplete without a corresponding knowledge of the Qliphoth, which exists as the core and the source of everything spiritual or material.

“Outside the Circles of Time” (Muller 1980) - The fifth book takes the knowledge and concepts forged in the previous two books and brings them together by tying in yet another source, which is that the lefthand path has its origins in extraterrestrial influences. According to Grant, we have not only been visited in the past by extraterrestrials, our entire corpus of dark occultism as well as even some of the genetic anomalies of sorcerous individuals have been due to periodic intercession and intercourse with extraterrestrials. This is where Grant begins to pull themes and ideas from H.P. Lovecraft into his work, as well as introduce the occult world to the workings of a group of magicians in Cincinnati who had proposed a new aeon of the Egyptian goddess Maat. I thought that this was also a good book, but Grant’s ceaseless proofs involving Gematria and other very obscure occult evidence seemed at times to be grasping at straws.

“Images and Oracles of Austin Osman Spare” (Weiser 1975) - Another excellent book by Grant. This book revisits some of Spare’s writings and reproduces a lot of Spare’s artwork. Grant attempts to categorize and give a more rational framework for Spare’s occult beliefs and practices, but the deeper examinations are contained in the above books. This book had quite a variety of Spare’s artwork beautifully reprinted, much of which had not been in the public purview for half a century or more. If you want to get a real insight and perspective into Austin Spare through his artwork, this is probably one of the best books on that subject. The artwork is carefully reproduced and given a greater critical and logical context that Spare himself was unable to provide in his earlier writings.

Kenneth Grant also produced his own versions of the books by Aleister Crowley “Magic in Theory and Practice” and “Book Four,” combining them together to produce a work entitled “Magick.” I never purchased a copy of this book, so I can’t make any recommendations for it. Grant had an interesting perspective on Crowley, and in some ways seemed to understand him in a deeper and more profound manner than compared to the writings of his other students and torch holders. In all, Grant published more than 21 books, although most of what he published I neither purchased nor read, since the bulk of it came out after the above six books.

Beyond the above list of works, Grant, in my opinion, began to produce books simply for the sake of marketing himself and selling them. Very little ground breaking material surfaces from these works, and it would seem that Grant’s brilliance finally succumbed to telling tall tales and producing a fictional account of his occult world and experiences. Particularly painful is Grant’s writings about the “Mauve Zone” and his animating of much of Lovecraft’s fictional writing into supposed occult revelations. I found the books, “Hecate’s Fountain” and “Outer Gateways” to be nearly useless and even somewhat silly. I stopped buying and reading Grant’s books after attempting to read these two awful tombs, and decided that he had finally come to the end of producing anything revelatory or even useful in a practical sense.

Grant cranked out many more books, but I only gave them a cursory glance when I ran across them in occult bookstores. I felt that I had the best of what Grant was to produce in his long life, and had no regrets about not purchasing any more of his works. He had faded somewhat from the focus of my work, but his revelations and accomplishments with the six books listed above stand as a foundation to the work that I am doing, and the work that many others are doing. We all owe Kenneth Grant a debt of gratitude for all of the amazing things that he did give us in his literary career.
Frater Barrabbas
Posted by Frater.Barrabbas at 11:39 AM