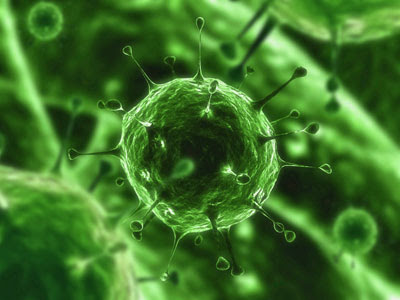 The virus that I am!
Someone recently left a rather tart comment on one of my old articles, raking me over the coals for blindly accepting that the “modern masonic, postmesmeric [sic] and eastern methods are better to work the Art of Ceremonial Evocation[,] which is exclusive to European midde-ages [sic] and reinessaince [sic] magic.” The article in question can be found here, where I concluded with my full analysis and examination of Joseph Lisiewski’s book. I know what you’re thinking, that the article in question was posted way back in June of last year. Anyone who would have commented one way or the other had already posted their opinion months ago - so this is really old news.

What caught my attention, besides the fact that this individual has problems with spelling and punctuation, is that I have been accused by him or her of using a modern Masonic methodology with an inclusion of Eastern methods in my techniques adapted for spirit invocation and evocation. I suspect that what he or she is referring to by “Masonic” is the Golden Dawn, and Eastern or “post Mesmeric” methods would be meditation, such as Asana, Mantram, Prana-yama, and Yantra yogic techniques. Of course, contemplation and trance techniques could be considered Western, and these are also espoused and used by me. I guess I would have to say “guilty as charged,” except for the fact that my use of these various systems is more of an appropriation and an adaptation rather than a wholesale use within their indigenous contexts.

My rituals, if examined carefully, look like a fusion of Golden Dawn structures with a definite Wiccan perspective. (Some have even said that my magick stinks of witchcraft.) Eastern techniques, which are used for mind control and altered states of consciousness, employ methods that are obviously from the disciplines of Yoga. Of course, this makes me no different than a large population of other ceremonial and ritual magicians. I am, indeed, in good company! The fact that I also use techniques supposedly invented by Franz Bardon doesn’t get me off the hook either, because some folks could smear him with the same accusatory brush of being infected with an Eastern prejudice.

I guess you could say that I use these techniques because I have no desire to live like a monk in order to be able to perform invocation and evocation. Something else that the commentator forgot to consider is that I am not in any way, shape or form, a Christian occultist or Esoteric Christian practitioner. I am a pagan and a witch, nothing more or less, so that might exclude me from adhering to any of the Abrahamic practices associated with the old grimoires. I have the gall to think that any such rules or requirements don’t apply to me, and I suspect that they don’t apply to many others, either.

My critic goes on to state: “I’m not even going to waste my time to prove you [are] wrong, but this is hilarious. I hope that some day magical modernism will be defeated, before it corrupts Western Magic to death.” Of course, anyone who says that they won’t waste their time trying to prove me wrong is probably defending a position that is indefensible, but at least my conclusions were a source of mirth for him or her. If nothing else, my words were taken with humor and laughter by this reader.  (After all, I do try to be funny from time to time.) Still, he or she opined about the supposed evils of “modernism” corrupting the purity of Western Magic - to its utter demise.

Now it’s my turn to laugh! I hate to tell this fervent follower of the “old” ways, but Western Magick has been polluted with a lot of various hybridizations, multiple wholesale expropriating and borrowing from other systems and cultures, and a kind of modernist adaptation, which has been going on since the late 19th century! Where has this individual been hiding all of these years, in complete cultural isolation perhaps? Maybe he or she lives in a cave somewhere like some Trappist monk, and only recently got access to the internet. Yet I doubt that to be the case, since Catholic educators are known to be quite rigorous, and one of the indelible marks on their students is their innate ability to spell and write properly - not to mention thinking in a logical and coherent fashion.

So what we have here is someone who believes strongly that the “old” ways and techniques of working ceremonial magick are the only true ways, and that everything else is an evil aberration that is destroying the practice and tradition of magick, besmirching it with the stench and horrible taint of modernism. My, oh my, most of the magickal practitioners I know are so screwed, and they don’t even know it! This is the argument of the blue blood purist versus the evil eclectic - that’s me, folks. I am the primary cause of the fall of the High Art of ritual and ceremonial magick, and my ideas and practices would be laughable if they weren’t so perniciously attractive to others. I am like a virus, a disease of modernity! I should be wiped off the face of the planet before I spread my evil vapors everywhere. Although, come to think of it, I am not alone in this apostasy, there are so many of us. DOOM!!

Let’s deal with the purist perspective right here and now. First of all, I have no problem with anyone who takes a reconstructionist perspective in their practice of ritual or ceremonial magick. Some of my best friends are reconstructionists, and I am respectful and supportive of their work, as I am with anyone who is a true practitioner of magick. My single issue with reconstruction, however, is that it’s probably incapable of replicating a system of belief and practice that is holistically congruent with some past epoch. The further back you go in time, the less complete is the historical picture. To practice ceremonial magick as it was practiced, let’s say, back in the 16th century would require a veritable mountain of historical research, and the ability to surround oneself with all of the cultural accouterments of that time - a daunting proposition.

If one is electing to practice magick like John Dee in the late 16th century, then the entire belief system that John Dee espoused would have to be completely inculcated so that it represented a seamless and holistic world view. One would have to completely reject all modern inventions, perspectives, beliefs, as well as material comforts in order to completely model the mindset of a Renaissance man. I suspect that such an effort would fall short, and there would obviously be a lot of gaps in what constituted the mindset and worldview of an individual living in that time. What I am proposing here is a perfect model of a reconstruction of the English Renaissance perspective. It would require completely forgetting anything that might either abrogate or modify even in the slightest manner the entire basis of one’s religious faith. I suspect that such an attempt would be ludicrous and not very useful.

How about if we ratchet our model back somewhat in order to craft a worldview and a methodology that would have been more like what a Renaissance man might have been if that culture and time were modernized somewhat, so that one could at least consider it a purist’s perspective untainted by the evils of modernity. That leads us to thoughts about how to revive a worldview that is long since dead. Perhaps a monastic lifestyle would help, such as being partially sequestered, saying the Holy Office eight times a day, attending daily Mass, engaging in confession, penance and good works. One would also consider periodic fasting, abstaining from sexual intercourse with one’s lawful wife, or perhaps even being completely celibate. Long periods of prayer, meditation and contemplation, performing ablutions of various types and reading the scriptures would occupy the first stage of the five stages of classical evocation (i.e., consecratio). It doesn’t seem like there would be much time for building a career, but then just some good ol’ back breaking labor as a regular regimen of penance should suffice - along with wearing a “hair” undershirt. One should also avoid worldly temptations, so that would rule out theaters, television, magazines, newspapers, computers, and any books that were not sanctioned by the church. Daily penance could include flagellation, minor mortifications of the flesh or other forms of self punishment. It would be a very pious, sectarian, narrow, boring, masochistic and self-deprivating existence - one that only the unimaginative fanatic would enjoy. I, for one, wouldn’t ever choose such a life for myself, or anyone else, for that matter.

If we live in the modern world, then we can balance our spiritual and magickal lives with the requirements of living fully in that world. However, we can never emulate the piety of our ancestors of over four hundred years ago. Instead, we will need other tools to acquire the higher states of consciousness needed rather than just a regimen of prayer and religious practices. Whether one studies the Eastern systems of Yoga, or just learns to adapt the powers of breath and unwavering sight, the repetitious strains of affirmations and prayers intoned aloud, and not to mention adopting a seated posture that can endure long periods of this practice, they are one and the same.

As for the Masonic influences, considering that my rituals are based on pagan and Wiccan religious perspectives, and that the supposed Golden Dawn patterns have been completely overrun with highly complex structures and a reliance on prismatic energy patterns, I sincerely doubt that one could judge any of the rituals that I use as having been derived directly from Masonry. I may have invented a system of magick based on that which was given to me by my teachers and peers, one that mixed various systems and drew in many other sources as needed, but that is the way of the modern magician, in my humble opinion. No one really works magick as it was worked in the past, since we live in a modern world, we have adapted either an ancient tradition or built up a whole new perspective. Yet it becomes, as it is practiced by the modern magician, a new system without precedence. This is because we carry in ourselves all of the knowledge and experience of a modern existence, and there is nothing that we can do to change that. So instead of attempting to be a purist and condemning the synthesizing work of others, magicians should acknowledge that multiple applications of the practice of modern magick do and must occur.

Anyway, I have expounded a little on some of my thoughts about the opinions of this unknown individual. I not only reject his or her logic, but find it highly flawed and deeply ungenerous. Instead of just admitting that many folk practice magick differently, and that it’s OK (in fact it is a truly magnificent thing), this person has instead become so twisted that he or she has taken a very fundamentalist approach to ritual and ceremonial magick. That is a singular perspective which appears to completely confound the whole basis of the heterogeneous and syncretistic nature of the perennial philosophy, not to mention the practice of modern magick. As far as I am concerned, the person who has made these inelegant comments is both a narrow minded sectarian and a delusional practitioner of a dead end tradition. He or she has my deepest sympathy and pity. (We shall see if any more such brilliant comments are left behind, or if perhaps, it was nothing more than the periodic moaning of the winter wind.)
Frater Barrabbas
Posted by Frater.Barrabbas at 10:22 AM