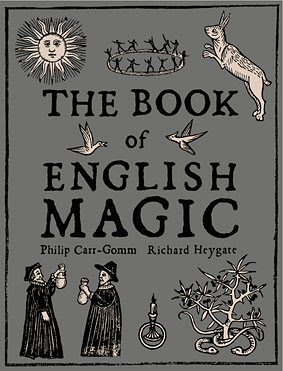 I have completed examining and reading over a book entitled “The Book of English Magic” co-authored by Philip Carr-Gomm and Richard Heygate, both of whom are authors of books on Druidism. Since I was sent a complimentary copy of this work, I also promised to read it over and write up a book review for my readers. Because I have such a large pile of books to read, this task took a little longer than I had anticipated. The book begins with this paragraph, which pretty much defines its focus and its scope.

“Every country has its magic: in wild places, in its history, and in the traditions of its healers and mystics. The lands that border England have a special magic - Wales and Scotland are brimming with tales of wizards and seers - but this book focuses on the country that has grown, by design or quirk of fate, into the world’s richest storehouse of magical lore: England.”

With an introductory paragraph like that, how could anyone resist diving into this book? It is compelling but also accessible, written for the adherent as well as the novice. Still, let us continue with the critique and examination of this work.

First of all, this is a very long and nearly comprehensive examination of just about every conceivable occult or magickal belief system or perspective in both the history of England, and in its present state. The authors have stated in the very beginning of their book that England has become a veritable source for all things having to do with the practice and belief in magick, and after reading over this book, I would have to agree with them. At 538 pages, this is not either a small work nor one that can be read over a weekend. The book is densely packed with information, and even a supposedly advanced occultist can find something of interest in this book. However, this book was written with the novice in mind, approaching each chapter with an easy to read and comprehending kind of narrative that explains the history and modern practices of each subject area. The book is divided into twelve chapters, one for each major area of the occult, although there is some overlap. There are maps, pictures, biographical entries, locations of interest, lessons and exercises, in fact everything that anyone would want to have in order to gain an overview of western occultism, or perhaps to perform a kind of occult tour of the U.K.

The Twelve chapters cover the following topics in the order they are presented in the book:

Each chapter is laid out in a very ordered manner, having the following structure:


The book is well written, edited, well stocked with pictures, diagrams and maps elucidating a general overview of the topical chapter, but including books and other sources for a deeper examination. There are also quite a few sections devoted to practical exercises and basic occult lessons. This book has something for nearly everyone, and because it’s so easy to read and lots of fun,  I found it enjoyable and actually quite absorbing. Even a focused reading of this book would take a while to complete it, but then this book was obviously written to be read in sections, fully explored and enjoyed. I found this book to be quite excellent, and I would recommend it to anyone who wanted to have an overview of many of the occult paths that have their origin in England.

Perhaps one of the best features of this book is that it would easily facilitate someone who wanted to build for themselves a kind of occult tour of England. There are lots of featured locations and even internet links that can be used to get more information, such as contacting the organizers of public events. I think that this book deserves to have a place in the library of every serious occultist, since it can and does function as an important overview of every occult path that had its origin in England. I suspect that those who are either dilettantes, beginners or completely new to western occult beliefs and practices will find this book to be very valuable, too.

Hopefully, someday, someone will write this kind of book about the U.S., since there is quite a large body of adherents found in every part of the country, and plenty of magickal and mystical places as well.
Frater Barrabbas
Posted by Frater.Barrabbas at 11:31 AM