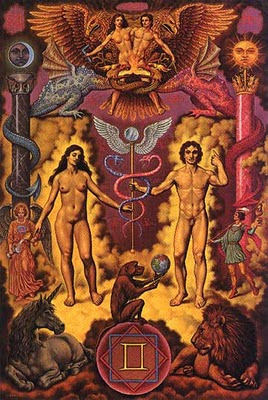 As I may have stated previously, I have completed the final ritual in the suite of rituals used to perform the Abramelin Lunar Ordeal. This rite was the one that has eluded me for some time, and only by receiving hints from the spirits themselves have I been able to figure out how to write this ritual. Now what remains to be done is to determine how to pick up the thread from last winter and move forward with it. I may need to re-perform a few of the rituals, and most definitely, performing the Bornless One invocation rite will be a necessary component as well. To give you an idea of how this new ritual works and its overall purpose, I decided to include the introduction to this ritual, which is called the Alchemical Hierogamy Rite of Union.

The Alchemical Hierogamy Rite of Union is the culmination of the series of rituals that make up the Abramelin Lunar Ordeal, representing the point in that ordeal where all of the elements of this working are brought into perfect and harmonious completion. The mythic theme and structure for this ritual is based upon the critical Rosicrucian document, the Chemical Wedding of Christian Rosenkruetz. Many have puzzled over this simple seven part allegory, and its simplicity belies a deep and powerful mystery that is still relevant today, even though it was first written supposedly in 1604 C.E. Still, I was fortunate in having in my library a copy of the book with a new translation by Joscelyn Godwin and a powerful commentary written by Adam McLean. It is due to Mr. McLean’s brilliant commentary that the allegory was reducible to a format that allowed it to be incorporated into this ritual. The sevenfold pattern of the allegory is analogous to the sevenfold stages of the alchemical Magnum Opus, which it was meant to illuminate as well as obfuscate.

As an historical note to this entire ordeal and its presentation, this last ritual entirely eluded me when I assembled the rituals for the Abramelin Lunar Ordeal together back in 2009. I knew that some kind of ritual marriage or union was required, but exactly how to do this was completely opaque to me. Even so, I took what rituals I had and went ahead and performed them, with the exception of the Bornless Envisioning Rite and the Assumption of Great Powers. By undergoing that ordeal in the late autumn and early winter of 2009, I was able to put into motion a process of spiritual ascension that has produced many amazing things. Still, I was not able to conclude the ordeal because I was missing the last and essential ritual. A goddess (Godhead of Water) was revealed to me in that working, as well as an image of myself as a young ageless youth (my bornless or higher self), but what I required was a method to join them together into a synthesis where they could be reborn as a singular unified expression living as my innate conscious being. Many months passed, and only a year later from the time that I began the ordeal, did the meaning and purpose of the final rite become revealed. It came in fragments, and then in whole pieces as I carefully read, studied and meditated on the translation and the commentary on the Chemical Wedding, which had been the very first clue.

The key to this mystery is that the Chemical Wedding is not really a wedding as we would understand it. It is more like an allegory of death (a voluntary execution) and an alchemical rebirth of a young King and Queen. In the process, their substances are fully commingled and jointly undergo the redemptive and creative process of complete alchemical rebirth, where their new forms are of the highest and purest nature - or Spirit residing/incarnating in nature. A traditional wedding is wholly absent from this allegory, and so is any kind of Christian symbology or allegorical tropes. The story is one that is completely alchemical and philosophical, but it hides a powerful mystery that is timeless and critical to understanding the higher processes of spiritual union.

Therefore, with this final ritual functioning as the most important keystone, I will be able to complete this ordeal and proceed from that point forward, having acquired the powerful forces freed and unleashed for all time within my spirit and being. I look forward to writing the accounts of this final working in my journal and noting the final combination of operations, which will include the Bornless Envisioning rite and the Assumption of Great Powers.

This ritual working consists of a four part layer of ritual structures that represent the Magick Castle of Mysteries, the Descending Tetrahedral Gateway or Underworld Tower of Transformation, the Inner Domain of the Crossroads and inner circle, which denotes where the core of the mystery is revealed, and then finally, the Ascending Tetrahedral Gateway or Tower of Resurrection. The central or core mystery is a simple three-way handfasting between the three elements revealed in the Abramelin Ordeal - the archetypal feminine, the archetypical masculine, and the magician, locked together in space and time. The elements of the ring, magick mirror, and the vestments of glory are blessed, empowered and sacralized so that they may be used by the high adept to represent the union of Spirit, Mind and Body - the Thricefold Initiation.

The rite is begun with a powerful introit, where the celebrant contemplates the invitation to the Alchemical Wedding of the Deity and Higher Self, these are depicted as representing polarities, the Divine King and Queen. After a suitable period of meditation, the celebrant indicates that he truly wills himself to proceed with the mystery, knowing that to do so is to incur a transformation that cannot be reversed or taken for granted.

The Magick Castle of the Mysteries is a ritual structure that consists of the four watchtowers being set with proper formulas and the device of the Rose Cross. The center of the circle is set with an inverted Rose Ankh, representing the Orb of Dominion, and with the four Rose Crosses, this construct represents the seat of the divine royalty, or Sangreal. These five structures form the outer castle structure where the outer mysteries are revealed.

There are a number of correspondences that can be used at these five points, most notable are the five classical stages in Alchemy (which predated the seven used in this rite). However, the theme of this outer vehicle is encapsulated in the formula that is used to spell the word CRUOR, which means “blood” in Latin. The castle of the mysteries is the divine Regnum, which exists everywhere but cannot be perceived except by the wise and the elect. The five-fold castle structure, which is determined by the operation of squaring the circle, represents the five qualities of the Castle depicted in the Chemical Wedding. It consists of the outer gates and antechamber, the dining hall, the garden, library (room of the great globe), and the hall of the wedding. Omitted is the hall of the Sun (where the play within a play is enacted), and the secret treasury, where the tomb of the sleeping Venus lies. This last item is alluded to in the outer rite. The magick castle could easily be seen as an analogue for the mythic Grail Castle.

The Descending Tetrahedral Gateway, or Tower of Trasformation, is the first of the Tetrahedral gateway structures that leads the celebrant into the underworld core of the mysteries. The descent represents the first three steps of the alchemical process - calcination, dissolution and separation. All three of these steps represent the reducing of the prima materia into its more elementary forms - symbolizing the death and reduction of the young King and Queen in the chemical wedding. The three formula letters/Tarot Cards are the Hermit (Atu IX - Yod), the Hanged Man (Atu XII - Mim) and Death (Atu XIII - Nun).

The central mystery chamber, which is the third structure, is derived from the combination of the erection of the four cross roads with a central inner circle. The theme of the mystery chamber is found in the Tarot card the Lovers (Atu VI - Zain). This is where the chemical wedding, or joining of the physical substances of the sacrificed King and Queen are combined together to form the synthesis of the material out of which they shall be reborn and resurrected. The inner mystery is also a simple wedding ceremony or “handfasting” between the Godhead aspect, the representative of one’s Higher Self, and the celebrant. It would be assumed that this mystery would be slightly different for each individual, and may involve a God aspect, instead of Goddess (as I have personally experienced it). The alchemical stage of conjunction is depicted at this point of the rite.

The fourth ritual structure is the Ascending Tetrahedral Gateway, or Tower of Resurrection. It is the second and final tetrahedral structure that leads the celebrant out of the mystery chamber and into the light of the day. This is the evolutionary arc and uses the final three stages of alchemy, which is fermentation, distillation and coagulation. All three of these steps represent the regeneration and reconstitution of the prima materia into its final formulation, the Great Work of the Philosopher’s Stone and the Universal Medicine. The formula letters/Tarot cards are Aion - Last Judgement (Atu XX - Shin), Art (Atu XIV - Samek) and the Star/Fisher King (Atu IV - Tzadi).

The circuit of seven alchemical steps represents the completion of the Great Work and the fusion of the three elements of the self into a three-fold initiatory mastery of one’s self and Spirit. Once this operation is complete and stabilized over a period of one lunar cycle, then the final rite, known as the Envisioning, can be done to completion.

The barbarous words of evocation used in the Castle of the Mysteries ritual structure are taken from the Greek Magical Papyri in Translation, section PGM-V, 1 - 53, which is the spell for the Oracle of Serapis.
Frater Barrabbas
Posted by Frater.Barrabbas at 10:24 AM