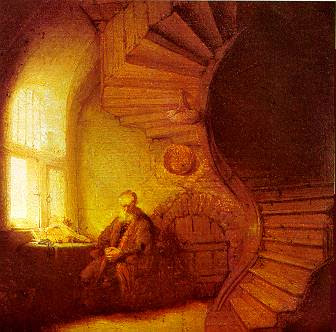 Even though I have already put out a three part article on the history of the Qabbalah, I inadvertently missed writing something about Moses Cordovero. This man was probably the greatest qabbalist in the Safed based group of qabbalists, but he is often eclipsed by his more famous student, Isaac Luria. To correct this deficiency on my part, I have decided to assemble a short article on Moses Cordovero. I will add this piece to my larger history document so that it will more correctly reflect on the actual history of the Qabbalah.

Moses Cordovero - born 1522, died 1570 - was a resident of Safed in Palestine. Little is known about Cordovero’s actual birthplace, but it was likely somewhere in Spain, undoubtably due to his family name. Cordovero was something of a remarkably intelligent man, having written his first monumental work when he was only 27 years old. His teachers were Joseph Caro and Solomon Alkabez, but he soon eclipsed them in his mastery of the arcane subject, the Qabbalah. It must be recalled that Safed became the safe haven for the Spanish qabbalists, and it was here that the Classical Qabbalah was developed to the point that modern occultists would recognize it today. With such a small community featuring such a large collection of great minds, it’s no wonder that they produced a tremendous flowering of qabbalistic and metaphysical speculation. The great works of the middle ages wrought by the Gerona, Castile and Toledo qabbalistic schools was brought to a whole new level of refinement and synthesis, and one of the leading minds in that work was Moses Cordovero. He wrote two major works, the “Pardes Rimmonim,” and the “Elimah Rabbati.” These works were published in the 1590's in Cracow, likely promoting and preserving Cordovero’s work amongst the Hassidic communities in Eastern Europe. One can also assume that these works were also read and studied by Christian savants as well.

While Cordovero and his work is well known to scholars of Jewish history, he is little known and appreciated by occultists. His teachings are briefly mentioned by Israel Regardie, in his book, “Garden of Pomegranates,” but I have found no other such references. This is likely because his student, Isaac Luria, became so famous, and altogether eclipsed him. Luria promoted a much more controversial messianic and apocalyptic frame for the product of the Safed qabbalistic synthesis, which became very popular. Luria and his teachings became so popular, in fact, that few outside of the more hardcore adherents of the classical Jewish Qabbalah have ever heard of Cordovero. It’s also likely, although somewhat disputed, that many of Isaac Luria’s ideas were based on or taken directly from Cordovero’s teachings and writings. Where Luria sought to promote a sensationalized version of the Qabbalah, Cordovero was more interested in quietly tackling all of the various different perspectives and speculations in the Spanish Qabbalah, and then building a synthesis that united them all into a single doctrine. Cordovero was the great bridge maker and synthesizer, who brought the Qabbalah from out of the medieval epoch and into the brilliance of the Renaissance. Cordovero created a speculative Qabbalah that had more in common with a philosophical system than a religious creed.

Some of Cordovero’s contributions included the notion that the ten sephiroth acted as a bridge between the Deity and the world, and that the emanations came directly from the Godhead. He tackled and resolved one of the more difficult controversies in the Spanish Qabbalah, which revolved around whether the sephirah were imbued with the substance of the Godhead, or were merely instruments, devoid of any of the substance of the Deity. Cordovero determined that both approaches were correct, which meant that the sephiroth were instruments, but they also were imbued with the essence of the Godhead. He also taught that the emanations were light that came directly from the source of all, the Ein Sof. While preserving the immutability of the Godhead, Cordovero also argued that the essence of the Godhead was in all created things, thus establishing a powerful link between the humblest aspects of creation and the creator. Cordovero also saw the ten sephiroth as representing a dialectic process of thesis, antithesis and synthesis, as representing the trinary descent of the nine upper sephiroth. It is also very likely that Cordovero determined the structure of the Tree of Life, with it’s three pillars, and the configuration of the paths (3 horizontal, 7 vertical and 12 diagonal pathways). In fact, there were at least two different versions of the Tree of Life developed, and one of them, which was missing the lower paths between Malkuth and Hod, and Malkuth and Netzach, was adopted and promoted by Luria in his work.

Cordovero was the true “godfather” of the modern Qabbalah, and present day occultists owe this man a great debt of gratitude. It is likely that much of his writings found their way into a lot of writings of the Christian qabbalists, and from there, into the doctrines of the occult Qabbalah of the 19th century. When we look upon the wonderful glyph of the Tree of Life, we should recognize that it was likely due to his brilliance and his ability to synthesize many diverse perspectives into a single and holistic representation of the modern Qabbalah, since without that brilliance, such a glyph wouldn’t exist today.
Frater Barrabbas
Posted by Frater.Barrabbas at 8:00 AM