Passing of a Beloved Fury Friend 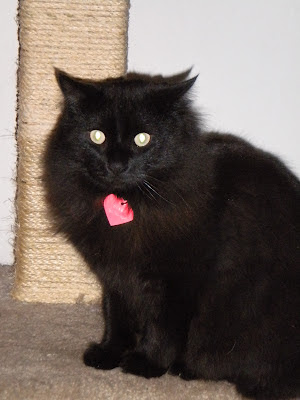 Last Saturday my girlfriend and I got back from a three day visit to see my father in Sun City, Arizona. He is now into his mid eighties, and with the recent passing of my mother, I felt he needed some company. My girlfriend, Grace, had never seen my father’s home, so we flew out there for a short trip. We left three of our cats in the house with plenty of food and clean cat boxes. They have a cat door to the house, so they’re free to come and go as they please. We have four cats, but one is ailing and needed to be put up with the dog while we were gone. I thought that the cats would be fine, and we have left them home before without any problems. They are usually quite happy to see us when we return, but cats are so independent that I wondered if they even missed us.

Since I moved out to this oversized house in Minnesota, I have had the company of several cats. Some of them have gone (taken by their masters when they left) but for a while we had four furry cats and one dog to keep us company. I must admit that cats are very magickal, and I am quite taken with them. My favorite cat is Jynx, who follows me around like a dog and spends as much time as he can at my side or laying by my feet - even when I am writing up documents in my office. I have to say that I am really close to Jynx, and he is very close to me as well. But that’s not who this story is about (thankfully).

One of the other cats (brought here by Grace) has the name of Stars, and he has been the most interesting, amusing, crazy, wild and wooly all-black Maine Coon that I have ever met. Sometimes he was obnoxious, waking me up in the middle of the night while tearing around the house. Other times he was astonishingly funny, with his Halloween cat impressions, leaping straight into the air with arched back; and he had the habit of being a living dust mop, picking up any and all debris from the outside world. He would leave a trail of debris from the cat door into the house, along with tufts of his generous fur. (One of my nicknames for him was “Pigpen.”) Stars loved the outdoors, and he hated winter because it really cramped his style. He would run up a tree and hug it like a big black Koala bear in the middle of winter, and he liked to stalk and attack nearly everyone, zipping out from behind a tree or bushes during the summer, and then prancing away.

He fancied himself a hunter, yet rarely caught anything; but it was fun to watch him stalk a chipmunk or squirrel, only to be left far behind and staring up an empty tree. One time I was startled when I saw him perched at the very top of our house, three stories up, sitting on the very edge of a slanting roof, staring down at the world like some kind of gargoyle. He was always on the move, and when the days were warm, he seldom came indoors, choosing to spend his time basking in the sun or hunting throughout the neighborhood. He often was perched atop an old dilapidated hunting stand that was located on the edge of the woods, sleeping in the shade, with his big bushy tail going back and forth like a clock pendulum. Stars liked to hang out with the rabbits and seemed to make friends with lots of other critters - except for rodents. He even invited a stray cat to come and live with us, and then we had four instead of three cats. Stars' cat friend was named Faust, and they often were outside together, although, seldom actually together.

I can remember one time late at night going to the door to help Stars deal with something that had frightened him (a rare occurrence), and when I got to the door and turned on the porch light, there he was, corned by a pissed off possum. Luckily my presence spooked the possum and it took off, while Stars decided (for once) to come in for a while. (The look on his face was worth a million laughs.)

Another time he was treed due to something that had scared him during the night, and he managed to climb up (and then down) a tree that was around 50 feet tall. Stars made quite a racket on his way up the tree, so I was awakened and had to go and find out what was up. He was a veritable fireball and nothing ever seemed to phase him or slow him down. He was also totally fearless, insanely reckless, or at least until he ran into something that was a lot bigger than him. He had a very large outgoing personality, but he was also very affectionate when he felt like being that way. He would even attack our dog, slapping him a couple of times across the face with his claws and then running away - and our dog is a 70 pound Pitbull-Labrador combination. Grace and I would often come away with bloody scratches if we tried to pet him when he didn’t want to be petted. Other times, Grace would pick him up and cradle him in her arms like a baby, and he purringly loved every minute of it.

Stars was Grace’s cat, and he loved her more than anyone else. He was affectionate with me, and adored it when I took time to feed him some special food. His purr was loud and spasmodic, and his cry was like a soft rusty hinge. I wasn’t close to this cat, but he found many ways to show me that he loved and appreciated me, often rubbing up against my legs when I was walking the dog outside. Stars was FIV positive, so his life span was going to be short no matter what he did or how careful he was. Yet he wasn’t careful or cautious. He lived life in the fast lane and had no regrets for whatever befell him. Since winter disappeared early this year, he has had many more days of being outside during this period, and has made the most of it.

When we came home, we were greeted by two of our cats, and the next day, my girlfriend went and retrieved the other cat and our dog. However, Stars was missing. This wasn’t too surprising for us, since he was so often outside, but after the second day, we started to get concerned. Stars usually came home to stuff his face with food (he was a very messy eater) before going out again. As a sign of what was to come, before we had left, Stars had visited my girlfriend in the middle of the night and did his usual body walk and nose and facial licking exercise. That was a particular habit of his, and it didn’t matter if she needed to sleep or not. It was like getting a fish smelling facial with a purring accompaniment. However, during the two nights that we were home, Stars didn’t come to visit his mistress, so Grace was worried and so was I.

On Monday afternoon, Grace had some errands to run, and on her way back home stopped at the local vet office to see if maybe someone had dropped Stars off. He wasn’t there, of course, and on her way back home she spied something dark in the ditch by the side of the road nearly two blocks from our home. Normally she would have ignored it (it looked like a small pile of dirt), but this time, something urged her to stop and turn the car around and check it out. Alas, it was Stars laying there on his side. He had been dead for a couple of days, and the birds had taken his beautiful luminous green eyes. It was obvious that he had been hit by a car, maybe during the evening. Perhaps he was chasing something, or being chased by something, but it looked like his skull was heavily fractured. It had been raining for the last couple of days and it had been cool as well, so all traces of his last moments were washed away. She put his body in the car and drove him home, and then set him down in his favorite flower bed for a temporary respite.

After my phone conference for work was over, I went down to the yard to look over poor Star’s body. He was a sad sight, I must say. We had picked out a nice old purple pillow case to wrap him up in, and his favorite orange ball was placed in there beside him. I dug a deep hole in the sacred grove and we gently placed him into it. Grace said some words and put a few handfuls of earth on the cloth entombed kitty, and then I used the shovel to properly bury him. We then both embraced and bawled our eyes out after saying goodbye, and we are still feeling hurt and sad today. I never knew how much I loved that crazy cat until he was gone. He has left a big hole in our world, I suppose it was because he was one in a million.

We will create a more fitting memorial for Stars other than the stone that is covering his grave now, but I can’t seem to shake impressions that he is skulking around, waiting to pounce on something from out of the cover of some bushes. I have communed with his ghost (at least it seems that way), but he died the way he lived, a reckless fireball that was fearless and probably a little bit crazy, too. I think that he preferred to go out in a blaze of glory rather than what was awaiting him a few years in the future (since he was FIV positive), and maybe he knew that this life would be short. Anyway, he is now immortal and a permanent fixture of the ancestor spirits of the grove. I feel that he is now one of our guardians and will look after the house and grove when we go on another trip. I saw an image of him curled up and sleeping in the far end of the grove, near the statue of the Garden Nymph (where he is buried). He loved the outdoors, and now he never has to come back into the house ever again.

He was a very unique cat with an unusual personality. We will miss him greatly. May the Cat Goddess Bast assuage his cat-like soul.