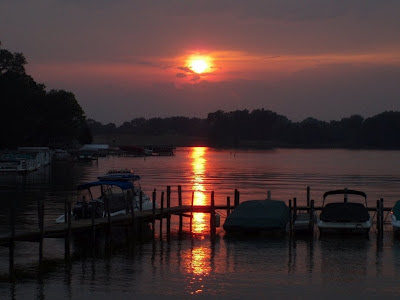 So, we are at the threshold of the Dog Days of Summer when the temperature supposedly reaches the highest points for the year. Up here in the Midwestern tundra, summer often has quite a variable of temperature and types of weather. The only month that it has never snowed in Minnesota is July, so that should give you an idea of how variable the weather can be. However, this year, summer came early, and after the deluge of rain that occurred from May through the middle of June, it became extremely hot and humid, with a series of record temperature days being achieved. Thankfully, it did cool down somewhat, but now it’s going back into the extreme levels of temperature recorded earlier.

As far as I am concerned, the climate is certainly demonstrating that extreme weather conditions have now become the norm, due, in no small part, to climate change and the increasing blanket of carbon-dioxide that is covering the earth. While conservative politicians either outrightly deny that climate change is a fact, or they say that it is only an unproven hypothesis, the world is quickly becoming warmer and the weather patterns more extreme. The motivation for this extreme denial of the obvious truth has more to do with short term gain and inherent greed than it has to any open criticism of the scientific process that was used to determine it as fact. Meanwhile, the average folks would rather believe that climate change is a myth or some remote distant future than have to face the fact that the nations of the world need to drastically change their way of acquiring and consuming energy now, since climate change and peak oil are going to have a profound effect on the world whether anyone believes it or not. Facts have a nasty way of intruding on political punditry, but unfortunately the whole world is affected, not just a small minority of wealthy plutocrats.

Summer is usually the time when I don’t do much in regards to magical ordeals or major workings. For me, it’s a time for rest and recreation. I feel that the short duration of warm weather up here is best enjoyed by doing things outside wherever possible. For this reason, I am working on getting my grove completely operational, since some of the artifacts that I had built there previously succumbed to the dry rot endemic to a heavily wooded terrain. I have recently installed two new Stangs (one associated with the Underworld or Death, and the other, Life), and I have also developed an outlier shrine to the goddess “Maid of the Woods.” So with these and related tasks completed, I am preparing for some deeper earth-based workings within that space.

How I approach working magick in a grove is quite different than how I do it in my temple. For one thing, I tend to abandon scripts and elaborate ritual workings altogether for more simple and direct kinds of workings. In the next few weeks, I will seek to re-acquire this space for outdoor pagan worship and extemporaneous magical work. Once I am successfully able to get the grove into a fully functional working environment, I am planning some major workings. Yet due to the extemporaneous nature of these workings, I don’t exactly know what I will be doing just yet. However, I will report and edit some material from my journal into this blog so I can share a little bit of what I have experienced.

I am also planning on generating two more fourfold elemental planetary talismans in the month of August. These will be done on the evening of August 22 and 28 while the moon is waxing towards full. The first evening will be dedicated to the planet Jupiter, and the second, nearly six days later, will be dedicated to the planet Venus. Once these operations are completed, I will have six of the seven planets fully covered by 24 of the 28 talismanic elementals. I wasn’t able to schedule a working for Mars, so that will have wait until later in the autumn or in winter. My reason for skipping Mars is because I couldn't find any of the Mars based Lunar mansions available during the waxing moon. I also didn’t want to invest the inverted power of any of those Martial mansions, since that is what happens when the moon begins to wane.(Inverted forces in talismanic magick are often used as curses, generated during the waning lunar cycle.)

The Jupiter working will have to overcome a bit of a delicate obstacle, namely that my elderly father will be visiting during that week. I am planning on consecrating all of the metal disks and the associated sigils well before he arrives, but the actual working will have to be timed after he has retired for the evening. My father has always been a no-nonsense kind of man, and he finds the occult, metaphysics and anything else that is intangible to the five senses to be false and unreal. My father fought me all during my youth, trying to persuade me, sometimes harshly, that occultism was the occupation of crackpots. He is something of an atheist or perhaps an agnostic, so we are quite opposites when it comes to spiritual, occultic or psychic subjects. Needless to say, I want to avoid offending him with my supposed spurious activities, so I will be quiet and discrete, doing my magick while he sleeps. I’ll have to be quiet since the guest bedroom that he will be using is located on the floor directly above the temple.

My ultimate aim is to have all seven fully charged planetary talismans and use them in conjunction for a working later this winter. I was blown away when I combined all four of these talismans in my own version of the Talismanic Portae Lucis working, so I suspect that being able to harness all seven will be quite a powerful experience. I am truly looking forward to it! I have a ritual entitled the “Septagramic Vortex Gate” and I would like to use the seven talismans as potent materialized markers for the points of the spiral vortex gate, which consists of seven nodes (and eight, if you count the point in the center of the circle).

As far as literary works are concerned, I will be starting to fully edit my sixth book that has the title of “A Pagan Magus” sometime in the next couple of months. Right now, the raw text has around 250 pages, so I will need to condense it down and remove some of the more extraneous text. I will need to also determine the illustrations that I need, and then contact my artist friend and see about paying her to produce them. I will also need a cover, too, but by the end of this year, the book should be ready to pitch to a publisher. I might also consider starting my own publishing house and printing the book in that manner. I haven’t made any decisions yet, but I do feel very good about this work. It contains some of the best commentary that I have yet written on the basics of witchcraft based ritual magick. My audience for this book are individuals who have at least mastered the principles of spell craft and basic Pagan or Wiccan liturgies, and who want to work more advanced rituals without having to abandon their already acquired craft.

My mundane job has become extremely busy, but I am thriving amidst all of the work. It would seem that I am once again redefining myself in regards to my career, and that is something that I have periodically done at strategic moments in my many years in IT. I have found that reinventing myself periodically is vitally important, since it is all too easy to get caught up in rut, and then someday become a victim of periodic reductions of force, or RIFs as we call them. I have a great team that I am working with, and I am getting a lot of positive exposure to corporate managers. I feel lucky that I love the kind of work that I do, and therefore, I find it an enjoyable challenge to invent new solutions to ever more complex problems.

I must admit that I really enjoy writing scripts and then testing them, going through the frustration of debugging them, and then finally experiencing the joy of successfully completing and implementing them. I guess that makes me something of an IT propeller head, but then I was always a bit of nerd from the very beginning. When I was a kid, only scientists programmed giant room-sized computers, and now, I am just one of many millions of humble IT database professionals. I find it very magical when I create something from nothing but obscure lines of code, so my mundane profession fits my more inner personal occult predilection. Anyway, I will complete this large IT project that I am currently working on by the end of the second week of August, and then it will get quiet again. My focus will shift to taking some time off and also getting some additional training in my field.

So there’s a lot of things on my schedule for the next couple of months, but most of it consists of enjoying the summer. I want to ride my bike on the many bike trails in Minneapolis, go kayaking on the interlocking city lake system, and take a five day drive to the badlands of South Dakota. There’s plenty to do between now and September, and each day I am reminded about how short the summer is, and that the beginning of winter is just a mere 14 weeks away. That is quite a sobering thought indeed! As for the warm weather and slight lack of rain, I am simply adjusting to it. We are not experiencing the kind of drought that the rest of the country is having to deal with, and it isn’t quite as hot as it has been further south. Our garden is growing quite well, and our tomato plants are about to bear the first fruit of the year (besides the strawberries of June). I am looking forward to spending some idyllic time with friends and in the grove, seeking to plumb once again the mysteries of this great and wonderful earth.