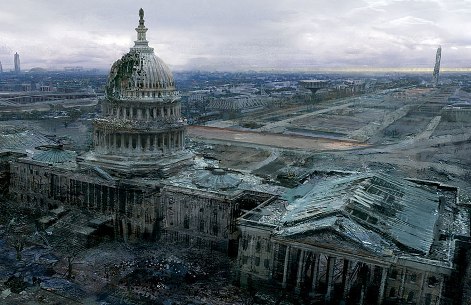 Recently, Jason posted a blog article that pretty much said what I have been brooding about for quite some time. What Jason has stated is that the Great Recession of 2008 and 2009 has so pounded most people around the world that the new future view is one that is a lot poorer and less bright than it might have been. You can find Jason’s article here. I would like to add some actual figures to this argument to show that he’s correct about his assumptions. The financial situation is not going to improve at some point in the future simply because the amount of wealth that has been vaporized out of the economy recently is so great that it will take a very long time to replace. What this means is that the job market, the real-estate market, and the ability for many to retire early has been irreparably changed, and not for the good. Hunkering down and waiting for the crisis to blow over is actually wishful thinking. The situation for the middle and lower classes isn’t going to improve for many years to come (if it does at all), and we are going to have to adjust our plans to accommodate to that dismal fact.

Let me put some real numbers to Jason’s claim and demonstrate that what he’s saying is absolutely correct! It’s just that many of us haven’t adjusted to this new reality, but looking at the numbers is quite sobering. According to an online article in the Center for American Progress, the U.S. economy between June 2007 and March 2009 lost 19.4 trillion dollars. You can find that article here. According to that article, over 6.4 trillion dollars were lost just in the housing market alone. That’s a lot of money that has disappeared out of the economy in such a short period of time. It is comparable although not quite the same as another crisis endured by my father’s generation, which was the Great Depression. Additionally, not everyone were losers during the recent period of seismic decline, since the really sharp and savvy investors either knew what was coming and prepared for it, or they were bailed out by the government. Some few individuals even made a huge amount money off of the market’s decline. The rest of us little people saw their retirement portfolios diminish profoundly, or lost their jobs and their homes during this terrible time. That much money leaving the market will have very dire and long term effects on all of us who are neither wealthy nor powerfully connected.

Many of the members of the “Boomer” generation won’t be able to retire in their late 50's or early 60's like their parents did because they lost too much of their retirement investments and savings. This will make the competition for jobs even more difficult, since there will be fewer people retiring to make room for the next generation.  For those who became part of the permanently unemployed, the future outlook is extremely bleak. Because vulture capitalists (like Mitt Romney and his ilk) have outsourced and off-shored, and pretty much destroyed, most of the manufacturing infrastructure in the U.S., there aren’t a lot of good paying jobs to soak up this labor surplus. Those who have jobs will take all sorts of abuse and stress, and even have to swallow a reduction of benefits, pay and vacation time just to keep what they have. This scenario will only make the rich even richer, and the rest of us will become nothing more than the unwilling members of the working poor.

What is most amazing about the world that we live in now is that the very wealthy 1% play by a different set of rules that exclude the rest of us, and these rules are rigged to ensure that they remain wealthy and fully empowered. While the average working stiff is lectured about being completely and altruistically ethical and loyal to his or her employers, the ruling class is able to bend or even distort the rules so that they can literally get away with lying, cheating and even legally pillaging what little money or material security the middle class has left. We are living in a plutocracy and a kleptocracy where the rich and powerful call all the shots, and the rest of us are doomed to follow them. The wealthy 1% believe that they are entitled to their role as the petty gods of a rigged economy, and they are given the tools and rules to steal from the rest of us. It would almost seem that they are seeking to enslave us for the sake of a little handshake of gold.

This is a very old story, and one that our great grandparents bitterly experienced well before labor unions and pension funds made work tolerable and retirement possible. Yet the dirty little secret is that we are not completely helpless. What we can do about this growing social problem is to fight back and empower ourselves at their expense. So it would seem that Magick is even more important in this tightening world economic drama, and it can and should be used to help, in whatever way possible, to even the playing field with those who have rigged the system in their favor. As Jason has stated in his article, all of us have at least some creative knack or ability, and we should use that to invent or create something that gives us a boost in these trying and difficult times. If nothing else, this is a time where all of us should be prepared to retool and reinvent ourselves. This is no time to be complacent!

Certainly, not voting for corporatist politicians whatever political party they espouse would be a good start to regaining some power and say in the national discourse. (This is one of the reasons that I have found the whole Republican party to be toxic and completely inimical to the economic interests of the middle class.) So would occasionally joining a massive protest movement that gets a lot of press, decrying the social injustice that economic marginalization has caused the middle class. We don’t have to support the rich who want to rule us as aristocrats, and we can find a certain solidarity in the fact that there are far more of us than there are of them. If many of us who are middle class magicians can find a common cause with each other, then maybe we can start projecting some of our combined magick powers to changing the world from the course that it seems destined to follow. However, since most magicians are rather insular and anarchistic, this is probably just a whim on my part, which will never become realized.

Still, I am making these suggestions because I really see an economic class war already in progress, and we of the middle class are the ones who are being brutalized and marginalized. All we have to do in order to throw a boot into the machine and halt its progress is to just opt out of the system and live by our wits and creative genius. Instead of hunkering down, hoping that things change, or even trying to find common ground with those who would seek to enslave us, we should just adapt and make our lives commercial free and distinct from the rat race that seems about to overcome us. Magick is, I believe, the key to a true spiritual and economic revolution, and I think that our country is long over due for this kind of change.