NRA and the Sponsorship of Mass Murder 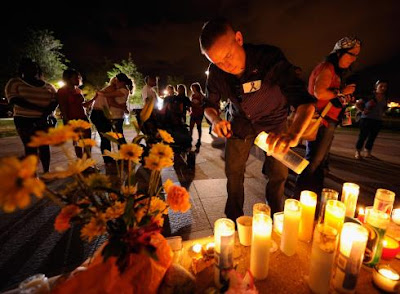 In the wake of the recent Aurora, CO, massacre, where some nut-case armed himself to the teeth and then proceeded to assault a group of innocent people attending a midnight viewing of the new Batman movie, we can feel a tragic grief for the families of those victims. In that terrible melee twelve people, including a young child, were murdered and dozens were wounded. While we attempt to make sense of this obvious mindless butchery of innocent people, it seems like our society is coming apart at the seams.

Why would anyone perpetrate this kind of heinous crime against innocent and unwitting victims? We can at least write off the accused murderer as being completely insane, but the question remains, how did this person acquire the guns and plan this assault when he was so obviously out of his mind? We are told that he was able to legally purchase the guns that he used on the crowd attending the movie, and that with no previous criminal record he was able to carefully plan his attack without anyone being aware of or stopping him from what he was doing. We are just to accept that these kinds of things can happen in a free society that allows its citizens to own and use fire arms. We even have a constitutional amendment that protects this right, but often I find myself wondering who is really being protected and who is willing to be the advocate for the potential victims when someone seeks to kill others using those same legally sanctioned fire arms? The police can hardly be expected do their jobs if the laws seem stacked against them.

Normally, I don’t like to discuss politics or social issues on my blog. I feel that there are enough political blogs out there to more than adequately reflect each and every opinion and perspective. However, the horror of this attack, occurring almost a year after the massacre in Norway, seems to require some kind of response from me.

The reason why so many people were injured or died in the Aurora attack is because of the weapons used. The accused killer had in his possession and used an AR-15 semi-automatic assault rifle, which is a civilian version of the military M-16. In addition, he had a .50 caliber pistol and a semi-automatic shotgun. The AR-15 had attached to it a “drum” magazine with a hundred rounds. That means that the alleged murderer had enormous fire power and killing capability when he entered that theater and started shooting. All of these weapons were legally manufactured and purchased in this country, and they represent a potential menace to one and all.

Until 2004, there was a ban on the legal purchase of assault weapons in this country, but the NRA sponsored politicians who were in power at the time simply allowed that ban to expire. In the present political environment, the NRA has made the discussion of any kind of sensible gun control a kind of third rail that will destroy a politician who would contemplate curtailing certain kinds of guns in this country.

I don’t know about you, but why would anyone either want or need to possess a semi-automatic assault rifle. It can’t be used effectively for hunting or target shooting because such rifles have very poor accuracy at greater distances. An assault rifle is a high velocity smooth bore weapon, which means that the bullet, when discharged, has a tendency to wobble, making it much more destructive when it hits a target. An assault rifle is never used for long distant shooting because it’s a smooth bore gun; it was invented exclusively as an anti-personal weapon, since a wobbling bullet will make a much larger hole when entering a victim. So it would seem that an assault rifle was developed to kill, wound and disable opposing combatants. Like the .45 caliber pistol, an assault rifle was designed to drop the targeted victim in his or her tracks. You might use an assault rifle against a bear to protect yourself in the wilderness, but then in order to successfully hit it, you would have to allow that critter to get a lot closer than most would feel comfortable with. A good hunting rifle would be a much better weapon to use for a long distance kill, if such a weapon was needed.

So it would seem that an assault rifle has one primary purpose; to kill people. Some pundits would say that guns don’t kill people, people kill people. But I would counter that argument by saying that the number of people that could potentially be killed increases considerably along with the fire power of a given weapon. Had the accused murderer in the Aurora killing used a normal single action hunting rifle or shotgun, then perhaps a lot less people would have been hurt or killed by his action. That, in a nutshell, is my point. Although that would be small comfort to the victims of that massacre, since even one person dying or being injured in such an assault is one too many.

Then there are the alleged gun-nuts who will state that if the people attending the movie had been armed, then the perpetrator wouldn’t have been able to assault so many people. The multiplex theater bans any kind of weapon on its premises, but could you imagine how many more people would have wounded or killed if there had been a gunfight between multiple wielders of fire arms in that theater? The chaos produced by such an exchange would have generated an even bigger massacre since the single assailant was in a target rich environment, while those would-be defenders would have had to acquire and aim their weapons at the perpetrator in the near darkness of the theater with people running everywhere seeking cover.

Some might blame the politicians for not renewing the assault weapons ban and others might accuse the president of being a coward for not trying to push through a reinstatement of this ban. But the NRA has been so successful in stifling any kind of sensible dialog about gun control for obviously lethal human killing weapons that politicians who would consider such a possibility would be open to the full wrath and anti-propaganda efforts of the NRA. In other words, any discussion of gun control is essentially political suicide. In fact, the NRA has been so successful in promoting its version of reality that popular support for any kind of gun control has been somewhat diminished over the last several years.

In fact, the right-wing political fringe has been stating the obvious deceitful talking point that president Obama is interested in somehow outlawing all guns. How he would do this is never stated, but it has produced a veritable boon for the manufacture of guns and ammunition ever since he was elected. There have even been at times reports of shortages of certain calibers of ammunition as the frenzy of buying and stocking has often outpaced the manufacturing and distribution. I find this occurrence to be quite puzzling, since nothing that Obama has ever said would indicate that he contemplates any kind of gun control. In order to outlaw all guns, the Second Amendment to the Constitution would have to be abolished by the passing of another and new amendment - a near impossible feat. Yet I am certain that if Obama could achieve it, he would then at least try to reinstate a ban on assault weapons, but the possibility of that happening in the current political climate is nearly improbable.

While I do support the second amendment of the U.S. Constitution, I don’t believe that assault rifles, even if they are semi-automatic, should be allowed to be sold or owned by anyone. These weapons were developed to kill people, and therefore, they shouldn’t be legal. Gun collectors can own fully automatic weapons if they are licensed, but for the rest of the citizens of the U.S., there are more than enough weapons available for hunting or sport. Maybe some day the people of this country will experience one massacre too many and will see the wisdom of banning assault weapons once again. It would also be nice to think that a bit of conscience in the wake of the recent Aurora tragedy would impact both the NRA and the manufacturers of assault weapons, making them realize that they are abetting and supporting the ability of insane killers to murder scores of innocent people. However, I feel that the cynical nature of politics in our country has allowed for a saturation of lethal weapons of mass murder, and that it is only by the grace of fate that more such massacres haven’t yet occurred.