Symbols - Markers of the Spirit World 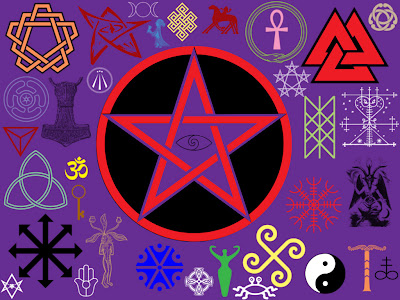 One of the most crucial elements to any kind of successful occult speculation is to understand the nature of occult symbology. Because most forms of occultism combine study with experiential based research and experimentation, an occultist quickly realizes that symbols aren't just window dressing or “eye candy.” While reading and studying expositions of various systems of symbology, the occultist must also pivot and take those same symbols and experience them as a form of reality within the inner planes of the mind and the spirit. This is done through the techniques of meditation, contemplation, and of course, ritual magick.

Perhaps the greatest insight that I have ever had was the axiom that true magic was found in that powerful and magical place between the mind and spirit where “Thought becomes form and form becomes thought.” What drives this process of spiritual and mental transmutation are occult and religious symbols. They are the veritable language that bridges the worlds of flesh, mind and spirit.

What I have stated before in previous articles about the Qabalah (and I make quite clear in my new book “Magical Qabalah for Beginners”) is that in order for that system to be truly realized, the occultist must make the many symbols, concepts and analogies become real and alive in his or her mind. This is also true of any other system, or occult meta-system or magical system: It must become a living system or it has no meaning or significance whatsoever. This is accomplished by performing very deep and periodic contemplation sessions on significant and key symbols of one’s specific occult tradition or adopted system. It would appear that performing this work on a regular basis will trigger all kinds of related phenomena, and ultimately make that system become a living tradition within the mind and spirit of the operator.

Why is this kind of contemplation so critically important, and what actually happens when one focuses on key or strategic occult symbols within one’s tradition? How does one transform a documented system into one that truly lives within the mind and soul? These are really important questions, and answering them will demonstrate how beginning students can advance themselves into a true adherent of an occult tradition. It is a methodology that is generally taught to students who seek training and initiation in a traditional occult organization, but for those who lack that kind of sodality, it can also be gained through hard work and a disciplined regimen of meditation and contemplation. However, an added dimension can be obtained through mental immersion and ritual work.

The first question that we need to answer is to explain exactly what a symbol is (as opposed to a sign) and how it acts as a sign post indicating the brief intrusion of a certain kind of hidden topology which would be called the linguistic “deep structure” residing wholly in the domain of spirit.  As the ocean’s waves sometimes subtly show by their behavior the contours of the ocean floor, so, too, do symbols show the outward and paradoxical nature of the structure of the spiritual reality. We cannot accurately describe with words or mentally contrived models the nature of the spiritual world since these are devices of the mind, which is greatly subordinate to the domain of spirit. We can only perceive that place of spirit through techniques and methods that overcome the natural obstacles and biases of the mind. These techniques are meditation, contemplation and ritual (or a combination of them), but the apperception of spirit can only occur when the rational mind is temporarily put aside or somehow shunted, allowing for the full realization of spirit by what Ken Wilbur has called the Eye of Spirit alone.

As I have stated rather succinctly in the second chapter of my newest book, “Magical Qabalah for Beginners,” unlocking the secret of strategic occult symbols is the key to unlocking any occult system or tradition. I use the Qabalah as the focus for what I have written, but it could be applied to any occult system.

“A key concept here, and one that is probably the most important point of all, is that the Qabalah is not just a bunch of lists or an interesting looking glyph. The Qabalah encapsulates symbols, and these symbols are either religious or occultic in nature, or both. Symbols should not be confused with signs, which is a common mistake that we all make. Signs are representative; they are, in fact, simple place holders, like a stop sign or a railroad crossing sign. Symbols are dynamic living processes or functions, like the Wiccan Pentacle, the Christian Calvary Cross or the Jewish Hexagram called the Magen (Shield of) David.

Symbols are conscious markers for deep level psychic processes that are transcendental and transpersonal, and I might add, usually mysterious to most people. Focusing on symbols can give one access to deeper layers of meaning and collective significance. Sources of symbols are numinous, archaic and inexplicable. With these concepts in mind, we can say something about the collective symbolism of the Qabalah, which contains the symbology of all the religions of the world. The religious symbology of the Qabalah is a living, breathing aggregation of functions, almost like a living body itself.

If we could then imagine symbols as being a kind of signpost with a very long wooden post that reaches all the way to the very world of spirit from our mundane world, then we could understand that accessing them within the mind and through ritual will allow us to contact that other world. What this means is that these occult symbols are indeed very important, and that focusing on them is a critical part of the work of an occultist. Determining the array of symbols within a specific target tradition and then accessing them through meditation, contemplation and ritual will open up portals between worlds and suffuse the mind and body of the operator with the numinous powers and intelligences of the spirit world. This is the methodology that one would employ in order to make the symbology of an occult system alive and fully activated.

Additionally, the very names and attributes of Deities and Spirits are also hooks or indicators of potent spiritual processes active in both the mundane and spiritual worlds. Contacting these being through religious paeans, offerings, oblations and exhortations, or more general forms of focusing, summoning and generalized or specific invocations is a crucial part of this process of enlivening a spiritual tradition. It is highly important for an occultist to establish and develop an intimate relationship with those spiritual entities that are associated with a given tradition. Failure to develop a deep and powerful relationship with such spiritual beings would be considered a profound act of disrespect and cause the whole process of awakening a tradition to fail. This is also where I incorporate the practice of spiritual alignment, including the ritual of Godhead assumption. I believe that this is a key practice to activating a spiritual system.

Occult symbols consist of religious symbology as well as other elements that aid in the definition of spiritual concepts that are beyond the ability of the mind to conceptualize. These are the various attributes that the occultist focuses upon and systematically activates so as to completely awaken and enliven his or her targeted tradition. These symbols can consist of (but are not limited by) the following list.

There are many more qualities and specialized attributes to consider, and I have listed here only the more important ones. An occultist should engage in an in-exhaustive search for all of the most important and strategic ones associated with his or her targeted tradition.

One of the most important tasks that occultists undertake is to determine the nature and qualities of all of the important symbols associated with their tradition and to assemble and array them into various comparative lists, using some kind of unifying meta-system to achieve this end. In my specific situation, I use the Qabalah to organize the symbols that are important in my occult tradition. Also, by focusing on these symbols using the techniques of meditation, contemplation and ritual, a meta-system of some kind can be revealed if one is lacking. Revelations of such meta-system structures, usually in the form of a glyph of some kind, is often proof that the occultist is successfully enlivening his or her occult system.

The ultimate goal for an occultist is to make his or her spiritual tradition, including all of its symbology and its unifying meta-system, a living, functioning and fully activated being. I call this being the Greater Dweller Within, and it more often is either slumbering or dreaming in the typical person rather than being fully awake. (So, perhaps the most important concept here is that the Sleeper Must Awaken, to steal a concept from the Dune series.)

This overall occult task, once achieved, awakens one’s higher spiritual self and allows for an eventual but immanent union to occur between the conscious mind and the super-conscious spirit or higher self. The impact of awakening and enlivening a spiritual tradition is likely one of the key elements of achieving what magicians and occultists call the Great Work.