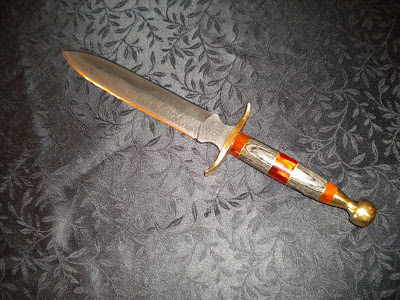 Recently I acquired a very expensive athamé or magical dagger, and I wanted to discuss where such tools can enhance the effectiveness of the ritual magician’s magick. I know that my stated perspective is that a tool is merely the extension of the magician, and that its effectiveness is determined by the magician’s competency. I still believe that, of course, but esthetics does have an impact on the overall effectiveness of the magick. If a very competent magician works magick with the very best tools and temple furniture available, then he or she will be that much more effective. This is not to say that the same magician could produce excellent magical results using the cheapest props and meanest of temple furniture, but I do believe that esthetics plays a part.

Back in August, my lady Grace, along with my elderly father, made our annual pilgrimage to the local Renaissance Festival, and we found ourselves at the booth of a sword and dagger maker by the name of Daniel Watson, a renown sword smith and owner of a sword making smithy called Angel Swords. You can find the website here. Anyway, Daniel had quite a collection of swords and daggers for sale at this booth, and all of them, I might add, were quite expensive. Most of these weapons are made for martial artists or for the historical re-enactment crowd, like those who attend or work at the Renaissance Fairs. However, Daniel also makes magical tools under the kind of regimen called for in the old grimoires, and these weapons are just as beautiful and incredible as the others. In fact, I would wager that Daniel probably knows something of the ancient art of putting a “soul” into a weapon, because his weapons seem to have a powerful emanation even without the typical charging and consecration.

So, Grace and I were talking to Daniel about some of his magical weapons and I admit that I was already pretty much turned off by their cost despite how beautiful they were or how impressive they felt holding them. However, Daniel took out a truly incredible dagger and had my lady Grace hold it in her hands. Now Grace is not really that much into weapons, magical or not, and it was obvious that Daniel was trying to impress upon her how incredible this dagger looked and felt once held in her hand. I saw her light up the moment she put it into her hand, since she could feel the spirit in the weapon and felt an immediate bond with it. This dagger had a beautifully textured blade, and the hilt was fashioned from Diamond Black Oak and Amber rings.  (In candlelight the blade actually looks black with a thin shining edge all around it.)

It was a truly magnificent weapon that was already fully charged and spiritually empowered. She looked at me with those big beautiful hazel colored eyes of hers and asked me if I would consider purchasing this wondrous tool. Well, the price was a lot higher than anything that I had previously paid for a magical dagger, but I decided that if such a blade could talk to her, how much more would it resonate in my own hand if I used it for my magical work. I decided that we would share this majestic blade, so I bought it. At over $1,500, it certainly wasn’t cheap, and I could only afford to put a down payment on it as part of a convenient lay-away plan. I continued to make payments on it during the autumn and early winter, and then after the Solstice, I made the last payment and it was immediately shipped. When it arrived, I presented it to Grace, who fell in love with it once again.

On a cold and dark evening in January, my lady and I went through the process of properly charging and consecrating the blade in our temple, although it was largely a superfluous action on our parts. The dagger was already quite changed to begin with, so it was neither negatively or positively effected by our operation - it was just something that we have done with every weapon used in our magick. The core of the charging regimen is where Grace and I nakedly embraced each other with the cold steel blade held between our bodies. We were very careful with this operation so that neither of us would be cut by the very sharp blade on that dagger.

Since then, I have occasionally used that peerless magical dagger in my work, and I have found it to be profoundly effective. Holding it in my hand, I can feel it slightly vibrate and resonate with the “soul” of the weapon, responding eagerly to my will to lay down lines of force or draw geometric devices in the air. It is a true delight to use this tool, and it will undoubtably be an heirloom that Grace and I will give someday many years in the future to some spiritual and magical heir. What a wondrous behest that will be to some deserving magician and witch. Until then, Grace and I will use this beautiful dagger with great care and discretion, ensuring that it is properly cared for and honored as one of our great treasures. 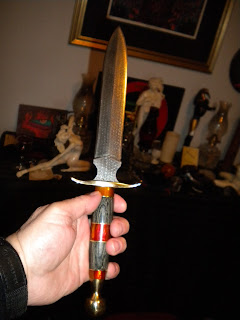 Posted by Frater.Barrabbas at 9:15 AM