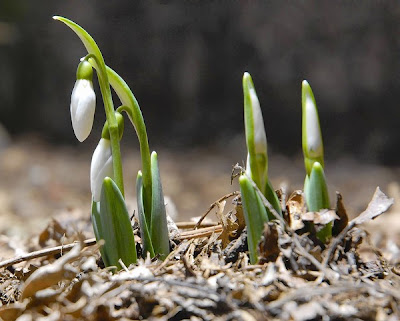 April has come and there are only a few indications that anything much has changed from winter to a verdant spring. It is a cold and lifeless spring so far, which is probably just as confusing for the returning geese as it is for the humans and creatures that have endured the long winter. While the snow is slowly receding, the lakes and ponds are still iced up, and only the brilliant sunshine seems to indicate that the season has indeed changed. We got an early spring last year and this year we get to experience a very slow transition, which will likely extend winter like conditions into May. This is not unusual for this part of the country, but it is somewhat depressing. The receding snow only reveals a brown and lifeless undercoat with no indication of any kind of new life. Also, the spring peepers are mostly silent, although I have heard, from time to time during the sunny afternoons, some singular croaking somewhere in the fields.

(Of course, as I was writing this article, Mother Nature dropped a couple of inches of wet sloppy snow on the land, and it looks again like a winter-scape. Well, so much for spring! I guess we’ll have to wait a few weeks for warmer temperatures in order for all of the snow to completely disappear. It is depressing in a way and also a slight shock to one’s sensibilities. The supposed end of winter had many starting to come out of their months long hibernation, but now they have receded back into the winter-like torpor. Welcome to the tundra-like experience of the northern Midwest plains.)

The long harsh winters make all of us here in Minnesota avid seekers of any sign of spring, sometimes even desperately. Some will even wear shorts when the temperature gets into the late 40's or early 50's. My career workload has finally dropped down to just maintenance, and I am now contemplating a period of self-study and training to assist me in making the transition from my current project to future projects once this one has lapsed. I have also put together my resume and sent it to the corporate leaders as requested so that they can find new prospects for me to be assigned, and I have also indicated that I am willing to relocated, provided that the relocation package is reasonable and helpful.

This means that my tenure in the tundra is nearing an end, since my company has now indicated that they are open to relocating key employees once again. This is how I managed to move every few years back in the 1990's and into the early 2000's. I have decided that I will pursue employment possibilities in other locations by undergoing yet another corporate move. I have endured six corporate relocations, but this time I am a home owner and not a renter. It will obviously be more complicated than previously. Since I have proven my value quite dramatically in the last several months to my corporate overlords, I am quite certain that I will be getting a new project to work on in the months ahead, and also, a relocation deal.

Over the course of the last few months I have still not engaged in any ordeals or extensive magical workings. It has been a period of reading, research, pondering over the meaning of this or that, and a lot of self-examination. Lately, this has become very productive indeed, since I seem to have stumbled upon a mother lode of insightful and thought provoking treasures.

Two lines of thought have guided my steps recently. These thoughts have produced two different directions for research, and they have both now converged together. The first thought was that if the Chaldean Oracles would represent an actual sacred book, at least for the late Classical period of Neoplatonism, then having the original Greek language version would be very helpful. I wanted to find this text because it would fit in with my thoughts about building up a completely Greek version of the Qabalah. To build a Qabalah, one needs to have sacred writings in the basic language proposed - in this case, Greek. So, I began to search for a book that contained the original Greek language version of the Chaldean Oracles. It turns out that there was only one book that fit this requirement and it was long out of print.

My other line of thought was that somehow Neoplatonism could be completed by adding some strains of Indian Philosophy to it. I have long felt that there was something very important missing from Neoplatonic philosophy, and that “something” can be identified by a simple concept. As a practicing ritual magician and witch, I have long known of the fact that there is within me (and every other human being) a Deity, which I have called the God/dess Within. This concept is analogous to the Indian concept of the Atman. However, according to Advaita Vendanta, there is no difference between the Absolute Godhead and the Individual Godhead, where it is said that Brahman and Atman are one (and indivisible). (I have discussed this idea previously in an article, and you can find it here.)

What that means is that we all have within us a direct path to the realization of our own Godhead as revealed in the One. Assumption of the Godhead is one mechanism to developing this realization, but what it means is that there is no complete separation and distinction between the Absolute Godhead and the Godhead within each and every human being. This is quite a profound realization and, I might add, it doesn’t appear in the various Neoplatonic writings where the distinction between humanity and the Godhead is quite rigorously enforced. This is why Neoplatonism talks about the theurgy of  “ascension” as a method of returning to the One. However, it would seem that returning to the One is actually not possible for anyone but a very small minority. In Indian Philosophy the concept of “returning” doesn’t exist. It is more of an internal revelation (a transformation and a spiritual evolution); it is, in a sense, discovering what was a fact inside of oneself from the very beginning. I believe that this distinction between Indian and Neoplatonic philosophy is also to be found in the practice and experience of modern witchcraft and paganism, or at least where Godhead assumption (as the Draw) is central.

So over the course of the last few weeks I have been very busy reading and studying the books "Chaldean Oracles" by Ruth Majercik and the anthology "Neoplatonism and Indian Philosophy" edited by the late Paulos Mar Gregorios, which I might declare is very heady stuff. Yet the combination of these two perspectives is helping me to make a breakthrough of sorts.

I believe that Neoplatonism and Indian Philosophy are both monist systems developed within a pagan religious environment. However, Indian Philosophy has had a much longer and continuous evolving life-span. In fact, I suspect that Indian philosophy made breakthroughs that Neoplatonism might have made as well if only it had continued in the same spirit and direction over the course of centuries instead of being uprooted from Athens and Alexandrian and then slowly waning in the remote fastness of Harran.

Another distinction is that Indian Philosophy is, for the most part, a living religious and philosophical tradition, where the praxis that represents its foundation is still being worked today. This is so unlike Neoplatonism, which has had to be reinvented based on a lot of fragmentary lore. I believe that it might be possible that certain schools of Indian Philosophy, such as the Indian Tantras, could be used to help complete and evolve Neoplatonic philosophy to a more complete and mature form, and perhaps even help to formulate a comprehensive praxis. That is my belief and the intention behind my work, however, we will see how it works out in the months ahead.

One thing that is tragic about the Chaldean Oracles as they exist today (and it’s something that I hadn’t fully realized) is that this work exists only in fragments. The complete text has never been found. What we have are the quotations that other late classical authors have written about it and these quotations were preserved to the present times. However, at least now I have those remaining fragments in their original Koine Greek. Ms. Majercik's book has been out of print for years and is only available as a scanned copy that can be downloaded from the internet. I realize that downloading a copy (as I have done) is to facilitate a process that I can’t fully condone, but the only copies that are available are being sold for over two thousand dollars. I could also maybe get a copy through inter-library loan and then wait for weeks if it does show up, but this was the quickest way to get a copy. I am hoping that someday the author or publisher will deem to reprint a new version and make it available to everyone who wants a copy.

Yet I am once again quite taken with this mysterious work. If ever there was a book of sacred writings for Hermetic Pagans, it was the Chaldean Oracles. This book was produced through a form of magical skrying, where the senior Julian acted as the magician, and his son, the skrier. As quoted from Ms. Majercik’s introduction, “The Chaldean Oracles are a collection of abstruse, hexameter verses purported to have been ‘handed down by the gods’ (theoparadota) to a certain Julian the Chaldean and/or his son, Julian the Theurgist, who flourished during the late second century C. E.” She goes on to say that the oracle verses were derived from the theurgic techniques of calling and receiving. It is, therefore, quite singularly amazing that these verses derived from theurgic rituals were regarded as authoritative from Porphyry to Damascius (3rd to 4th centuries). Even so, what has come down to us today are just some of the verses, or at least the most important or profound of these. We also don’t really know the sequence that these fragments originally occurred in the original work, and it can only be hoped that some future discovery will locate a complete copy of this work.

Still, what fragments we possess have always astounded and perplexed me, but Ms. Majercik's commentaries are the most illuminating that I have ever read. The Gnostic sect, the Sethians, particularly were engaged with this work and its inspirations can be found throughout those Naghamadi texts that have survived. We can see the effects of this work in the magical texts of the Greek Magical Papyri, too.

With these books in hand, I feel like I have some pretty profound answers to some questions that I have been asking for quite a long time. I will write all of these musings up in my blog in the very near future.