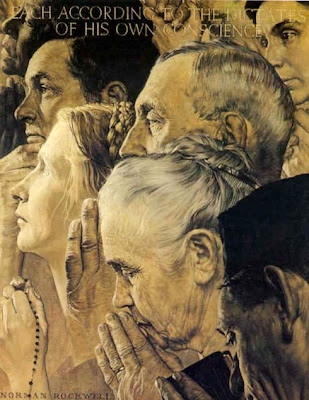 Recently, Sam Webster wrote an article on Patheos where he said that basically, you can’t worship Jesus Christ and also be a Pagan. It would seem that he believes them to be mutually exclusive. What he means is that if you are a Christo-Pagan then you are behaving in such a manner where you are not being true to the spirit of either religious tradition. It does remind me of a saying in the New Testament, where the visionary Jesus declares in Revelations 3:16 “So because you are lukewarm, and neither hot nor cold, I will spit you out of My mouth.” This, of course, is a warning to those who would pose as Christians but not be passionate or true about their faith; that such individuals are even worse than out-right deniers. It is a harsh unequivocal declaration that would pose a kind of terrible sorting of Christians nearing the mythical end-times. Curiously, I have found Sam’s article of a similar nature, seeking to sort out true Pagans from the pretenders. You can find Sam’s post here and read it for yourself.

On the surface it would seem reasonable to request, or at least address the issue, that Pagans worship as Pagans and Christians worship as Christians. It would also seem to address the issue that Paganism and Christianity are strategically different enough that they should not be mixed. I have known a number of Witches and Pagans who feel strongly that those individuals who, for whatever reason, still adhere to the actual worship of Jesus Christ cannot in all good conscience consider themselves witches or pagans. Superficially, I would have to agree with this perspective, but only if we are talking about the idealized traditions of Christianity (of the Evangelical mind-set) and Modern Pagan reconstructionism.

Of course, when you consider the wide and massive variety of beliefs and practices that actually exist, the idealized perspectives become nearly useless. In the end it doesn’t really matter what anyone believes as far as organized traditions are concerned, particularly if that belief is based on authentic religious experiences. Another problem with this perspective is that it doesn’t take into account that there are quite a few versions of Christianity and even as many different perspectives on Jesus Christ, Mary Magdalene, the Saints, Angels, and every other attribute of that faith as there are individuals practicing it. This is also becoming quite true of Modern Paganism as well, and it just becomes nearly impossible to establish borders and generalized definitions if the population of the faithful doesn’t fit at all within those definitions.

What seems to be driving Sam Webster is a phenomenon that is quite local to the United States, where there is a united and seemingly threatening religious political faction that is bent on making all members of the population conform to a single theological and politically conservative mind-set. Of course, this faction represents many individuals who are frightened of any social changes as well as inimical to the basic freedoms of religion accorded to everyone in a secular political society. However, this faction only appears to be united, and in fact, it is itself quite fragmented.

Additionally, this faction represents only a small minority of overall Christians living and practicing their faith in our country. It is doubtful that this highly conservative faction of Christians will ever hold sway over the nation and they will likely remain an ever dwindling part of the population over time. This is not to say that there isn’t any danger to our society from the actions of Christian right-wing religious fanatics and their apparently misguided beliefs and political machinations, so we should be diligent in enforcing our right to worship as we see fit without any outside interference. I also don’t agree with Mr. Webster that belief is central in Christianity, since there are a number of levels of religious experience and participation in Christianity (as there are in other religions), and that belief by itself represents only the most basic and superficial level. I would have to say that faith is much more powerful in Christianity than belief, especially if it is faith based on authentic religious experiences.

The chief problem that I have with what Sam Webster is saying is that he is holding up a model of Christianity and saying that it is a religion of oppression, and that its Triple Deity is somehow malevolently disposed towards non-believers. Christianity is not a monolithic religion, and its various spiritual attributes are defined quite differently, depending on the sect, organization, time-period, geographic location, etc. The Roman Catholics of antiquity, or the middle ages, or the Reformation are not the same Catholics of today; these are different groups of people operating under different time-periods who espoused a different set of overall values. While the majority of people in the U.S. today are mainstream Christians, a much smaller percentage belongs to what would be considered the most conservative and fundamentalist of religionists. To equate the whole population of Christians with the beliefs and activities of this small minority is analogous to making prejudicial judgments about Islam based on the actions of a handful of Salafi jihadists.
Time changes everything, including very orthodox religious organizations. If anything, the religions functioning in the world today are actually a lot more tolerant and peaceful than they have been for quite some time, despite the villainous activities of a small minority. There are heinous crimes committed by religious groups and institutions that go against the sentiments of world justice, just as there are with nations and their actions. The world is not perfect and religious persecution still exists in pockets of our world, although it has diminished considerably over the centuries. Mr. Webster seems to have taken the slights and the inconvenient events of living and working in a nominally Christian U.S. society and amplified them to point where it would seem that we are living in a nation that is persecuting and is overtly hostile to non-Christians. Are there certain levels of discrimination experienced by Pagans and Witches living in the U.S.? Yes, but what they have endured hardly matches what Hispanics, Blacks, Asians, Women or the LGBT community have experienced over the course of the last several decades.

In regards to my own religious and magical practices, I am not a Christian. I don’t, for instance, worship Jesus Christ, Mary Magdalene, or pay homage to any of the Saints. However, I have appropriated Christian liturgical rites and adapted them for my own use. I also work extensively with the Qabalah and the entire hierarchy of Angels, as well as Demons and other spirits, although certainly not in the same manner as either Christians or Jews. So, Sam Webster could judge that I am behaving like a creditable Pagan should behave, but he would have to overlook the borrowing and appropriation that I have made from Christian beliefs and practices. Since I happen to know that he is a Thelemite then I wonder if he is also against the Gnostic Mass, since its basic structure and function was also appropriated by Crowley from the Christian Mass.

While I might agree with some of what Sam Webster has said, I don’t feel that anyone can place boundaries on what is definitive in regards to Paganism or Christianity. Our world seems filled with heterodoxic adherents who have taken beliefs and borrowed them from nearly every tradition and sought to build something for themselves that is meaningful and spiritually fulfilling. As time goes on, this blending will probably only get worse, profoundly blurring the boundary between creeds and sects to the point that any kind of sociological definition would have to be considered absurd.

Where does this mixing up of religious traditions lead us? Who can say with any authority today who is a true Christian or who is a true Pagan? As a ritual magician, I believe that ultimately we end up at the point of being religious and spiritual individuals, practicing our own personal creed and belonging to a sect of one. Where we find points of unity, then these should be considered the foundation for a greater re-unification, and the newly emerging sodality would not be recognizable as any of the traditional religious organizations that are now being engaged.

We live in a Christian-based culture with national holidays that are suffused with Christian themes, so it almost seems impossible to be able to completely exclude oneself from the traditions and heritage that are endemic in our culture, and this despite the fact that we are supposedly living in a secular society. While what Sam wrote did strike a cord within me, it also demonstrated that what we don’t need is to formulate any kind of sorting process between true pagans and the rest of the syncretistic masses who would happily join us in our public rituals and celebrations.

If there must be a definition of Paganism then it must be made in such a manner that it includes everyone who wants to be included, and that it discriminates against no one. If we have learned anything in the last millennium or so, it is that tolerance and mutual understanding should be our principle values in dealing with our own pagan diversity as well as the diversity of other faiths. What we don’t need is sectarian sorting, discrimination, or absolute definitions of how and whom a Pagan or Witch should worship as their attributes of Deity. We are still working out the details of our theology and practices, and establishing harsh limitations at this point makes little sense to me.

I do applaud Sam Webster for publishing his opinions for everyone to read and ponder, and some of what he says does resonate with me. However, the harshness of his judgments against a single monolithic faith is nothing less than counter productive. If we want other religious communities to respect and give us credit for being an authentic religious creed, then we need to accord them the same respect and credit. If someone wants to engage in a syncretistic search for personal spiritual truth, then who are we to either criticize or denigrate that approach? Obviously, within Modern Paganism, there should be room in the temples of our hearts for all Deities, creeds and spiritual perspectives, since that is the way of paganism from ancient times.