Invocation of the Spirits of the Nephilim part 1 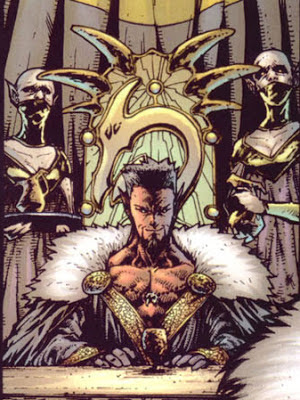 This is part one of a series of articles that will demonstrate the results that I encountered many years ago when I sought to invoke and contact the spirits of the Nephilim, namely the four greater chiefs of that body. I use the term Nephilim to describe the fallen angels of the Sons of God who came down to earth to mate with the “daughters of men” as well as their offspring, who were considered giants (men or women of renown). From these spirits I received a body of lore and a perspective on Enochian magick that is completely unprecedented. I would like to share with my readers some of the lore that I received from these entities and to demonstrate that the Nephilim are indeed highly important to the Enochian system of magick. I will first begin with Azazel, whose actual name spelling (according to the Dead Sea scrolls) is Azael.

These series of ritual workings will attempt to reveal the secrets of the source of the Enochian Current of Magick. Because present research has revealed the importance of the Beni Elohim (as the Nephilim), the rituals of this working have rejoined these entities with the Enochian system of Magick.

The Nephilim represent the source of the Enochian system, but the alignments that Dr. John Dee established in his skrying sessions are not ignored. Particularly, the five Archangelic Intelligences who will act as the wardens and sponsors of this occult knowledge are an important link as well as the Primary Enochian Agent, Naluage. Also included are the Spirits of Light, and the Tablet of Planetary Intelligences, of which the Mercurial Daughter of Light known as Madimi is of special consideration.

A final point of consideration concerns the lineage of the Enoch (or Chenoch) as an initiated body of adepts who have mastered the methodology of Inner Plane workings. The actual techniques that they used have been lost, so they exist only as fragments in the Western Mystery Tradition. It is the primary goal of this working to reestablish these techniques and to reorganize them into a complete system of modern theurgy.

Notes from the Invocation of Azazel

In previous workings, it was revealed that Azazel was the Spiritual Warrior and Visionary of the Nephilim. However, it was also revealed that Azazel was the acting Priest and Devotee of the Great Goddess. So it seemed appropriate that Azazel should be consulted for questions concerning the methods of Sex Magick, Initiation of the Priestess of the Grail, the importance of the Grail as a symbol of the Feminine Spirit, and also the technique of assuming the clairvoyant trance through which the future destiny of an individual or a nation might be determined. These items were said to be the knowledge that Azazel possessed, representing the core of the Enochian Magickal lore.

The Invocation itself was not particularly remarkable, once again there wasn’t any visual imagery, but the personality of Azazel was quite tangible, and he nearly assumed a recognizable form. Whereas Shemiezez was very mysterious and subdued, Azazel was direct and eager to communicate. I could almost perceive a large well proportioned middle aged man with red hair and a full red beard, dressed in brilliant colored robes of purple and scarlet. I heard him bluster and even tell off-color jokes, none of which I remember, or if I did, wouldn’t want to repeat. However, he also showed a keen understanding of human nature and a deep compassion for the troubles of human existence. Azazel desired that all men and women seek and gain from life that which they most desired. He believed that no one should feel cheated by life, when life itself was so precious. A point that Azazel repeated several times is that people create their own destinies, whether or not they are consciously aware of it. He felt that all that was needed to find fulfillment in life was to become aware of this process of creating one’s own destiny and taking conscious control of it. This task, though, when completed could make a person into a kind of ascended master; such is the importance of mastering one's self so completely.

The Power of the Pleasure Trance

The most important information that Azazel related to me was something called the pleasure trance. The pleasure trance consists of a High Priest and High Priestess who assume the roles of the God and Goddess respectively, and who worship each other in a form of projected idolatry. This process forms the basis of the masculine and feminine Eidolons. An Eidolon is defined as a temporarily manifested incarnation of the Godhead. Prior to the assumption of the Deity, the Priest/ess performs whatever methods necessary to block the egoic identity and allow the Godform to manifest in an unbiased manner. This blocking of the ego is, according to Azazel, the basis for all Dionysian type magickal or mystical practices. What this means is that the basis of the Enochian system of magick is Dionysian. Ecstasy plays a key role in blocking of the ego.

[Polarity as expressed in this kind of working can be assumed to take other forms as well. For instance, if two men are performing this rite, then they would assume complimentary Godheads that would establish an analogous polarity between them similar to a heterosexual union. The same is also true in the case of two women performing this rite.]

The pleasure trance begins at this point of magickal worship and veneration of the Godhead where the couple proceed to sexually arouse and excite each other, each playing one of the sexual roles of the two deities with total objectivity. This moving and caressing, making slow passes over each other with the hands and the body is called the dance of life and death. Through it one feels the ebb and flow of the powers of procreation and ecstasy (Life and Death) and expresses them through the body. The pair of partners also consecrate each other with oil and do other things that enhance a sybaritic response, and these collectively bring on a powerful arousal. The Priestess then assumes the asana of the Sacred Altar, and they sexually join. This is done by first stimulating each others’ chakras, then physically joining while applying a bandha or lock upon their anal chakras. The power is drawn up from the base chakra through the genitals to the heart, where it is made vital and empathic. The Crown chakra is opened and the Throat chakra channels the power of the Absolute Spirit through spontaneous and poetic utterances. Then the two Hearts of Fire are joined to become an expression of the Union of the Absolute. The avatars of the God and Goddess are now drawn into union through the Unified Heart, where they fuse into at-one-ment. The resultant energy is intensified until orgasm results, at this point the gateway has been opened and the pleasure trance is established.

Once the Pleasure Trance is attained, the couple may perform one of two different operations, depending on whether the energy generated by orgasm is projected within or externally. If the energy is projected within one’s self, then a kind of vision trance results, allowing one to penetrate the threshold of the Inner Planes. If the energy is project outward, using a prana-yama technique of hyper ventilation, then it produces an external prophetic vision where the structure of a future space-time is revealed. The direction of the energy determines the type of manifestation, but the potency of the experience is always extremely intense. Although the God and Goddess represent different types of vital energy, when joined, these energies become unified, so the processes of Inner Planes Vision or Prophetic Vision are available.

In addition to the above techniques, the spirit of Azazel imparted a considerable volume of information, much of which is still being realized. The Initiation Pattern of the Spiritual Warrior was revealed to me, and it awaits a future time when I will be write and document it. Also, the outlines for the Enochian Feminine mysteries were revealed and explained as well as the importance of the Priestess as the Matrix of the Avatars of the Mysteries. It was said that the symbol of the Avatar is the primary focus of the Enochian Mysteries, and that the Heart is the primary focus of the individual. The Avatar is the Heart of God, but the Grail Priestess is the creatrix of the Heart, therefore she is the origin of all Love and Unity as manifested within consciousness. The path of Ascendancy or Incarnation must therefore pass through the Gate of the Grail, the Creatrix of the Evolutionary Process, the Priestess who gives wisdom and power in her love and desire.

Yet the process by which a woman becomes a Grail Priestess is represented in three phases. The first phase is known as the Transference of the Grace, and consists of a powerful dedication or spiritual marriage where the candidate is purified, blessed by the Five Goddesses (or Gods), consecrated and then installed with a symbolic bond of union (usually a large gemstone ring that has been charged with a Talismantic Elemental). The second phase is called the Assumption, where the priestess invokes into manifestation the Five Goddesses, assuming the power and charisma of each one. The priestess then summons the Heart and the Womb Matrix of the Unified Feminine Spirit into her being and she produces the special sacrament, gives it to the God for a blessing, and partakes of it herself as the medium of transformation. The final phase is where the fully realized Grail Priestess performs the pleasure trance, thus giving and receiving of the transformation of the Unity of Being.

These items will all be documented in greater detail in the third book of the Sepher ha-Nephilim, which concerns itself with the Enochian Initiation Mysteries and Enochian Sex Magick.

The working was begun at 11:11 PM with the Consecration of the Circle during the Planetary hour of the Moon, thus locking it for the duration, on the Day of Venus, February 22nd, 1991. Luna was in the sign Gemini and one day following the First Quarter. There were no significant Astrological aspects. The working ended at 3:22 AM EST.