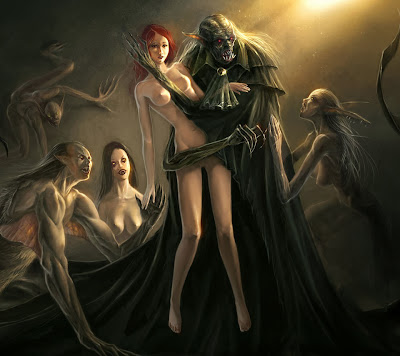 There has been some buzz in the blogsphere lately about whether there is an historical basis to the person of Jesus, or whether it is OK to practice magic and also be a Christian in good standing. I have already written up an article about my opinion about the historical foundation of Christianity, which seemed to offend some people. If you really want to read or examine it, you can find it here. I think that whatever opinion people have, whether adherents or outsiders, the historical Jesus Christ is not particularly important when compared to the legendary or mythical Jesus Christ. In fact, believers will believe in the their creed and what it means to them regardless of what anyone thinks or says. I leave the various sectarian discussions of Christianity and what it all means to those who are invested in this religion, since I don’t consider myself either an adherent or an apologist for that creed. My approach to Christianity is based on being an outsider and discussing its various tenets in the manner of comparative religious anthropology. I have no affinity for the individual named Jesus Christ nor any sympathy for any form of Christianity. I am a Witch and a Pagan, and that is who and what I am.

Some have written that they are attracted to the saints and employ them in their magical workings. I have no interest in any of the saints, apostles, martyrs, Mary mother of Jesus, Mary Magdalen, or any other aspect or facet of Christianity. I do very much like the artwork and music that Christianity has inspired over the centuries, and I also engage in the Christian holiday of Christmas to some extent; but I don’t attend any church services or any church based exhibitions or entertainments. I am, as I have said, outside and pretty much indifferent to Christianity. I honor those who are believers and adherents of that faith, but then I pretty much offer that kind of respect to anyone who is religious, regardless of their creed. While I may have appropriated the ritual structures of the old Catholic Mass and the Benediction rite, what I perform is completely rewritten and aligned to an altogether pagan pantheon. Even my occultism and my Qabalah are pagan based, and Christian or Jewish religious paradigms are foreign and unacceptable to me, or at least as far as I can determine. I was born in a Christian society and live in a Christian dominated culture, but I am not a practicing Christian nor a believer. When I have endeavored to perform a magical ritual that has Christian elements in it, I rewrite it so that my own creed is represented instead.

Do I believe that someone can practice magic and still be a good Christian? Absolutely, and this is really an absurd question, since nearly all of the renaissance grimoires are Christian based. These books obviously were written by Christians and practiced by Christians, so that seems like a logical assumption to me. It is true that certain Christian church institutions have promoted an anti-magic and anti-occult bias, but then again, it is questionable as to how strictly such prohibitions are enforced today. Certainly any Catholic who admitted in the confessional to practicing rituals to invoke angels and demons would likely face some serious penance and have to prove contrition to their respective parish priest. Some other sects are also steadfastly against any form of occultism, divination or magic, but I would assume that such adherents wouldn’t bother practicing these kinds of rites anyway. I also believe that you don’t have to be a member of a church to be a Christian, and that forms of esoteric Christianity would not only allow but might even encourage certain kinds of religious based occult workings and research.

It was only during the reformation that individuals were persecuted for practicing magic, occultism or even science because of the religious insecurity vested in both the Protestant and the Catholic churches. After those times, such prohibitions were not taken very seriously by the mainstream churches, and even today, such activities will be problematic in only the more orthodox institutions of Christianity, such as in the various groups practicing Christian Fundamentalism. Even so, it might be nice idea to quickly examine what a sin against the Holy Spirit actually is, and how such a judgement could indict apostates such as myself, but only if Christianity is the One and True Religion of World. Since I don’t believe that to be true, let us continue with this analysis anyway.

There are a couple of important passages in the New Testament where Jesus talks about the forgiving of sins, and also about the kind of sin that can never be forgiven - a sin against the Holy Spirit. We can easily find these quotes in the Gospels and they discuss what is an unforgivable sin.

“I tell you, whoever acknowledges me before men, the Son of Man will also acknowledge him before the angels of God. But he who disowns me before men will be disowned before the angels of God. And everyone who speaks a word against the Son of Man will be forgiven, but anyone who blasphemes against the Holy Spirit will not be forgiven.”

These two passages are pretty much analogous, but they don’t really explain what sinning against the Holy Spirit actually consists of. For a more detailed definition, we have to delve into Catholic teachings, Protestant teachings, and even what Mormonism has to say about this topic.

In Roman Catholicism, a sin against the Holy Spirit is defined roughly as despair, presumption, envy, impenitence, and obstinacy. Basically, it is a condition where someone abrogates to themselves what is the provenance of God. To think that one's malice is unforgivable, or to think that one has achieved forgiveness while doing nothing, or to envy another’s spiritual good, and to just be persistently obstinate about one’s errors or sins is defined as sinning against the Holy Spirit.

In Protestant Christianity there is less of a possibility of forgiveness than in Catholicism, but still, sinning against the Holy Spirit is defined as being an apostate. Apostasy is defined as the situation where one who has been shown or schooled in the truth of Jesus Christ and rejects what has been seen and experienced. This is the same definition as found in Mormonism, too. Still, practicing magic and occultism doesn’t appear to be an unforgivable sin against the Holy Spirit as long as one remains a Christian having the proper faith or practicing good works, depending on one’s specific sect.

However, being born and raised in a nominally Christian family and society and then rejecting that supposed universal truth to be a pagan or a witch would be considered an apostasy and a sin against the Holy Spirit. So, that means that Christians practicing magic and occultism are forgiven of their sins (if their particular sect has declared that such activity is sinful), but switching religions to practice magic and occultism can’t be forgiven. What that theological point declares is that I have supposedly sinned against the Holy Spirit because I have rejected Christianity, the religion of my birth. I was never confirmed into any church, but I was certainly baptized, so I am one of the many who are unforgiven, that is, if I lend any credence to Christian theology.

Anyway, that means is that I am a wicked and evil person and if you want to stay on the good side of the Holy Spirit you shouldn’t read my blog or have anything to do with me! I am beyond hope or help, at least according to basic Christian theology. That I also see the Holy Spirit as feminine makes me even worse of a sinner and an apostate, and that I call upon that Spirit in my rites is a profound blasphemy. However, I feel that I am a good pagan and a witch and I follow my own conscience as far as ethics are concerned. I am not a Christian, and I don’t feel any guilt or any remorse, nor do I even believe in the concept of “sin” as it is defined in the Abrahamic religious creeds. I am outside of that world, so I don’t need to repent or be forgiven! I have a strong alignment with the Goddesses and Gods of my particular creed, and that’s all that I need to do to live a truly pagan spiritual life. Since I believe strongly that there isn’t any universal religion or a single monotheistic deity, nor for that matter, a single spiritual truth that everyone is a part of whether they believe it or not, then I am on safe ground.

I also found it interesting that one of the greatest proponents of ceremonial magic, Henry Cornelius Agrippa, recanted all of his occult works and confessed his sins before his death. He died a good Catholic Christian, and his greatest achievement, the three Books of Occult Philosophy, were essentially disowned by him. Maybe that might be a revealing event as far as being a Christian and a magician is concerned, but somehow, I doubt it.