Thoughts About Thelema and Other Musings 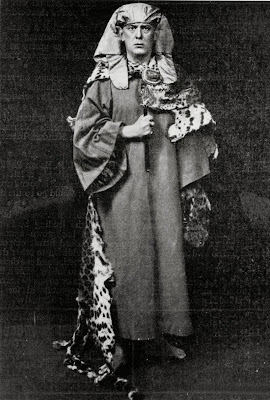 I really don’t care what anyone else thinks, but I have always found Aleister Crowley to be a truly great and profound writer about magick and other occult topics. His prose is actually quite satisfying to read, and to me he is concise and very logical. Even his most abstruse and difficult works are capable of being understood by the average intelligent person. Whatever his lifestyle was like, his reputation or the kind of person that he was makes little difference today, because what we have to judge him by are his written works, rites and his Thoth Tarot deck.

Already, Aleister Crowley is fading into legend. So it is nearly impossible for anyone to be able to present a proper biography about him, although several authors have made the attempt. Even though his history is quite copious when compared to Mathers, so many of his contemporaries had a very different perspective or opinion about him. Some hated him, some worshiped him, and many vilified him, and yet others saw him as either a writer, poet or an adventurer without any unusual attributes. (For instance, there was a lengthy article about Aleister Crowley in the Atlanta Journal Constitution during the early 1930's that discussed his world travels, mountain climbing exploits and literary skills (poetry), but didn’t mention anything about his occult practices.)  There has also been a lot of misinformation spread about Crowley, so much so that very little of the legendary data about him can even be trusted. Really, all we have are his works, and that, in my opinion, is worth far more than what most of us have achieved in a lifetime.

I have to sheepishly admit that I couldn’t hold a candle to Crowley’s brilliance and masterly writing talents. The only literary area that I am not greatly impressed with is his poetry, most of which was rather competently mediocre, but even within that media, he has a number of poems that rival the masters. To this day, I still like pulling out one of his books that I first read years ago and start to read it anew. It amazes me that I still find new insights and information even after reading the same book, ritual or chapter for the umpteenth time. That shows just how deep Crowley was, and also how brilliant. What is more amazing than the writings of Crowley are many of his later disciples, from Frater Achad, Israel Regardie (albeit, reluctantly), Kenneth Grant to Lon Milo Duquette, Jake Stratton Kent and David Shoemaker. No other magical tradition has spawned so many brilliant occultists and magicians, in my humble opinion. (They make my own tradition look quite hollow and empty.)

However, when it comes to engaging with the spiritual system of Thelema then I have to part company with the tradition that Crowley inaugurated. You see, I am a big fan of Aleister Crowley’s writings, but I am not much of a Thelemite. I like the first chapter of the Book of the Law (Liber Al vel Legis), but the other two chapters are not very compelling. I also don’t find a lot of spiritual value for myself personally in the religious aspects of Thelema, even though I do find it more meaningful than most other spiritual systems.

When it comes to spirituality, I am a true witch because I just can’t find greater meaning for myself than having a direct experience with the domain of Spirit. Religious institutions based on sacred writings (or “spirituality by the book”) are not very attractive to me, perhaps because of my need to see and experience everything myself. Thelema doesn’t abrogate personal gnosis like some religious creeds do, in fact it encourages it. Still, I feel that once something is written down, even if it is as brilliant as the Book of the Law, it is open to critique. I find myself cherry picking the parts I agree with and mentally arguing with the parts I don’t agree with while reading. I just can’t accept sacred writing as some kind of absolute truth because I think that spiritual truth is relative, and human linguistics is an imperfect science. I also don’t believe that sacred writings are written or dictated by deities or spiritual avatars; they are written by people, inspired perhaps, but still human.

I have been a member of the Ordo Templi Orientis, or O.T.O., and I have enjoyed the initiations and the companionship of other magicians in that organization. (I am no longer an active member in that order, for reasons stated above.) I have also had the unfortunate experience to meet some really obnoxious and jaded asshats, but overall, most of the Thelemites that I have met are very smart, talented, creative magicians and occultists. In fact, I could say that I prefer their company over the company of many other occultists simply because I feel that I have more in common with them. What I don’t have and can’t share in is the religious dimension of Thelema, and that is my loss. It certainly doesn’t reflect on Thelema or Thelemites if I am unable to see the Book of the Law as the premier sacred writ or Aleister Crowley as the prophet of the New Aeon. I just don’t believe that, so I would be a very poor Thelemite indeed.

I draw my perspectives from my own experiences, and I have found over the years that Thelema, as nominally defined as the True Will, is just one of four very important sacramental systems. I have written all of this into the rites of the Gnostic Tetra-sacramentary of the Order of the Gnostic Star, but I have left a lot of room for other members to draw their own conclusions. In that ritual context, Thelema is joined with Agape, Thanatos, and Eros as the four powers of Gnosis. While Thelema is the True Will, Agape is Platonic Love, Thanatos is Spiritual Transformation and Eros is Sexual Vitality. I believe that a balanced system of magick should have all four gnostic sacramental systems represented equally. In fact, I actually have in my ritual repertoire a Mass rite for each of these four systems.

Of course, when all four sacramental systems are joined together, they produce a fifth, which is symbolized by the Star, or STELLA, the unique essence of Spirit. Thus, the Order of the Gnostic Star acts as a keyword phrase and an emblem for the tetra-sacramentary as it is resolved within the Star of Gnosis. However, for Thelema, just as for the other three sacramental systems, words fail to encapsulate the true meaning of this specific current of gnosis. Thus, a Book of the Law would be too limiting to a greater understanding of Thelema (in my opinion), and this why I have problems with it.

In my opinion, each and every person must apprehend their own gnosis within each of the four sacramental systems. I have found that a lot of Crowley’s rites and even some of his occult poetry have helped me to acquire my personal gnostic experience of Thelema, and for that boon, I am grateful and I owe him a debt of gratitude. However, I am not bound to Crowley’s view of Thelema, and I have other insights that would be considered outside of the classical perspective of that creed. Few understood the profoundly gnostic and magical dimensions of Thelema as well as Crowley did, but to rely solely on what he wrote is to come up short, in my opinion.

It is for this reason that I honor Aleister Crowley, but I am not a Thelemite in the classical definition of that term. I feel an affinity to Thelema and Thelemites, but to me it is just one of four different sacramental systems and not the exclusive answer. For that answer, I have had to move beyond words and rites, and enter into the domain of pure Spirit. In that ecstatic void of unified consciousness, I have experienced many things and I have found them to be the core of what I know as truth. Yet I had to be fully immersed in that world and momentarily oblivious to the affectations of mind and body. I believe firmly that each and every one of us should approach our magical spirituality in the same manner, deeply, independently and through intense personal experience. Everything else is just other people’s opinions and thoughts, with or without any relevance or shades of truth to the individual seeker.