The Secret History of the World - Book Review 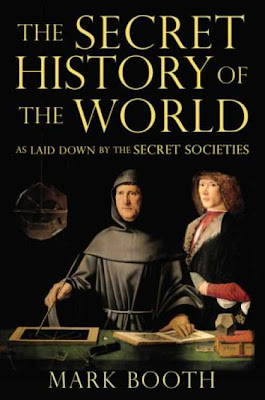 I have recently finished reading the book “Secret History of the World” by Mark Booth (2008 Overlook Press, NY), and I must say that it was a very interesting read. It took me a few months to plow through it, since I mostly read it just prior to going to sleep. That doesn’t at all mean that the book was boring or uninteresting, it’s just that I am used to reading three or more books at a time, and one of my time slots for reading is just before bed. So I spent half an hour to forty minutes reading it most every night, but in the end, I must say that it was well worth spending the time and diligently reading it to the end. At 550 pages, it’s not a slim book, and it’s very dense, each chapter has many ideas and facts to think about. This isn’t a book that you’ll be able to scan through in a few days.

The main premise of this book is that there is another perspective or way of looking at reality and history. We live in world that is dominated by science, which strongly proposes the theory that matter evolved before the advent of mind. But what if there was another valid way of looking at reality, where mind would exist before matter, and in fact, was a participant in the shaping and evolving of matter? The mind before matter model is the guiding principle for this book, which examines the entire history of the world - not from the perspective of science, but from the perspective of occultism and secret doctrines. Anyone who has studied both the sciences and esoteric philosophy know that they stand in stark contrast to each other, one seemingly contradicting the other. Superficially, initiates often find themselves in the unenviable situation of having to choose one perspective over the other. If they choose to side completely with the esoteric viewpoint and either ignore or deny the scientific perspective, then their ideas typically seem absurd or even ridiculous. Yet to deny the esoteric perspective and agree wholly with science produces a world view that is rigid, incomplete, without wonder and devoid of love and creativity - and might I add, empty of all magick.

For myself, I have straddled the fence by accepting the obvious scientific theories about the universe and the physical world, but I also know all too well the limitations of science. For instance, I believe completely in physical evolution, but I also believe in the evolution of Spirit emanating through the world of matter, powerfully shaping and influencing it. There is no contradiction in these simultaneous perspectives, since they operate in completely different worlds. Science has its domain, and Spirit has its domain, and only sometimes do they intersect (with the most amazing results, too). Since I have been practicing ritual magick for well over three decades, I can say without equivocation that I know the essential nature and peculiar quality of the domain of Spirit. I talk to spirits and they talk back to me. Yet I am not a fool nor a delirious madman, since I am able to live in the material world and deal with all of its limitations and frustrations, occasionally bending the rules and gaining insights, wisdom, and more than modest windfalls. So I found this book to be quite rewarding and fascinating, since it takes the premise of esoteric philosophy to the extreme, allowing me to find the central balancing point.

Mark Booth admits in the very beginning of the book that he is not an initiate of any order or mystery school, but for someone who is “outside” of the system, he has an understanding of the occult and esoteric perspectives like no one I have every read before. How is this possible? According to Mark’s own words, he just researched all of the available information. He did receive some inside assistance from a few occult friends, but it was mostly his own work, which is a remarkable feat. What was produced by such a research regimen is a history of world distilled and condensed from sources as accessible as the Bible, to the Secret Doctrine, and numerous other sacred texts, East and West, and many other obscure occult dissertations - all of them receiving the most thorough exposition and translation into terms and ideas understandable to the average lay person.

I found some of the ideas and concepts in the book to be completely “hair brained” and totally at odds with what I know and understand about history - these were hair pulling moments of acute frustration. Other insights were pure brilliance that allowed me a eureka moment or two. Yet much of book illuminated a world perspective not very much different than my own, tutored as it has been by decades of occult research and personal magickal experiences.

The Secret History of the World proposes a four part evolution of animate matter in the world, beginning first with the mineral world, then to the vegetative, and the animal, and finally, to human nature itself. Human beings went through all of these stages, becoming more tightly impacted and subjected to the material world, and losing their natural direct contact with the spirit world as their skulls closed up and entombed the human spirit in the fleshy brain and boney head. Humans traveled from a state of preconscious enlightenment to post conscious isolation and individuality. One might ask, where do we go from this point of greatest extremity of materiality and the dominance of brute nature - why, back the way we came, except in possession of total consciousness, reason, and mastery of the material world. The history of the world in the pages of this book aren’t the dry perspectives and speculation of academia, but the ideals of those who had never lost their connection to the worlds of spirit. That history, as absurd and profound as it must be, should be artfully and carefully integrated into the world-view of the occultist and spiritual seeker, so that confusion, absurdity and insanity is never propagated, neither sterility, hopelessness, nor a loss of soul. The key is balance - and a healthy imagination!

Perhaps the most fascinating statement in Mr. Booth’s book is found in the last chapter, where he pulls everything together in a monumental fashion.

“Esoteric philosophy calls for a rediscovery of the spiritual hierarchies ranged above us, and, intimately connected with that, a discovery of the divine capabilities ranged within us. This was the secret preserved and nurtured by geniuses as diverse as Plato, St. Paul, Leonardo, Shakespeare and Newton:

1. If you can think so deeply that you can rediscover the spiritual roots of thought, if you can recognize thoughts as living spiritual beings...
2. If you can develop a strong enough sense of your own individuality that you can become aware of your interaction with the Thought Beings that weave in and out of yourself, yet not be overwhelmed by this reality...
3. If you can recreate the ancient sense of wonder and use this sense of wonder to help awaken the willpower that lies sleeping in your deep, dark recesses...
4. If the fire of love for fellow human beings rises from your heart and causes you to weep tears of compassion...

...then you have been working on the Four Elements. You have begun the process of their transformation.”

I found the above four axioms to be brilliant and deeply insightful. I would have expected such a profound statement only from someone who was a wise and great adept, but instead, it was just the words of a researcher and a writer. Perhaps the greatest lesson that one could derive from this incredible great work is that the knowledge is out there in the world, accessible to those who are willing to seek and who deeply thirst to know the answers to the riddle of Spirit and life itself.

And to think that I bought this book because it had some very interesting information about the Nephilim, which turned out to be a scant three or four pages. The rest of the book was a trial and a privilege to read. Thus, I recommend this book to all of my readers - it is worth purchasing and reading.
Frater Barrabbas
Posted by Frater.Barrabbas at 9:32 PM