Seven - Mystic Number of the Macrocosm 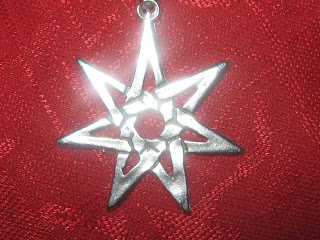 I am, regrettably, an exception, because I don’t accept this logic and haven’t for three decades! For me, the septagram (also known as the heptagram) was the perfect representation of not so much the macrocosm, but the sphere of the seven planets, which is exalted above the mundane sphere but is not the highest level of being. This is similar to what many Neoplatonic philosophers of late antiquity believed, thus it’s not so far fetched as it would seem. I believe that the planets are not actually the emblems of the Godhead as they are the spheres through which that unity engages with the material world. Above the sphere of archetypes exists the One, and it is that one through which we seek union and perfect emulation in ourselves. That one-ness within us is our individual godhead, our Atman or God/dess Within.

The seven archetypes, which are typically associated with the seven planetary intelligences, are also associated with seven of the ten Sephiroth of the Tree of Life (and the Seven Rays of the theosophists), but all of these qualities are the attributes of the One (the Monad), but that is not the same as saying that they are equivalent. So for me, there are layers to this model, and the stratification of these layers can be largely and generally classified as consisting of the macrocosm and the microcosm, but there is also a mesocosm between them. In other words, it’s just too complex to be left to a bipolar explanation, however simple that would be.

How did I arrive at the deduction that the number of the macrocosm is seven instead of six? It was an accident! Well, maybe it was due more to my frustration with the hexagram as a tool for drawing the invoking planetary angles. When it came to drawing the invoking formulation for the sun, the magician had to invoke all of the six preceding planetary angles, and then their combination (along with the solar glyph) produced the proper invocation angle of the sun. I thought that this was kind of convoluted, and not being wedded to the Golden Dawn methodology, I instead opted to experiment with the septagram.

Of course, Aleister Crowley had already come up with the unicursal hexagram, which had a specific angle for the sun, but by the time I encountered this new form, I was already using the septagram. Another factor was that the use of the hexagram for planetary magick was quite vague in the Golden Dawn material, and the version stipulated by Aleister Crowley in Liber O wasn't much better. Since there wasn’t anyone around to help me figure this out, and me being something of a revisionist dunderhead, I opted to create a whole new system. After all, I was a practicing witch, and the whole foundation of my ritual work (using the magick circle as sacred space) was quite different than that practiced by the Golden Dawn.

This task, of course, was not as easy as drawing a hexagram, but the resultant septagram was quite beautiful and elegant. (I must admit that it was like love at first sight when I finished drawing one for the first time. How geeky is that?) The one drawback to the septagram is that it’s pretty tough to draw in the air with any degree of accuracy or consistency. So for this reason, I constructed a large talismanic septagram device painted on a rectangular piece of plywood with a black background, a device that I call a trigon. The trigon is placed in the middle of the circle after an inner circle structure is drawn and opened, and it is used to invoke or banish one or all of the planetary angles of the seven planets. Adopting the septagram seemed like just a practical endeavor on my part, but once I began to really analyze the seven pointed star, I realized that it had a lot of potent symbolic correspondences that made it a really great choice.

The most profound and dramatic of the symbolic associations with the septagram and the number seven is that they symbolize the union of heaven and earth. The mystery of the Godhead is often denoted by the number three, which is why the triskelion (three interlocking spirals) and the trinity are important aspects of the Deity. These symbols are far more antique and widespread than the later theological Christian Trinity. Thus, as the number three, the Deity represents the combined forces of creation, preservation and destruction that permeate the material and immaterial universes. The Godhead, as three, is joined to the Divine Tetrad (the number four), which symbolizes the world as Cosmos, to produce the septagram. Therefore, the number seven is an amalgam of the numbers three and four, the Godhead immersed within the manifested world - the joining of Spirit and Matter in perpetual Union. Thus the number seven is quite a powerful symbol characterizing the impact of the macrocosm upon the microcosm, fostering a kind of magickal mesocosm, which is the place of mediation and union between these two domains. Taking all of this into consideration, what symbol could better represent the invocation and manipulation of spiritual intelligences commanded by the magician (as representing the godhead) to impact the mental and material planes?

Even though I began this journey of adopting the septagram out of frustration, curiosity and creative inspiration, it’s only later that I discovered how important and significant it turned out to be. I found that my adoption of this star form was quite an important feature of the kind of magick that I work, and it took me to a completely new kind of ritual magick. All of this happened because I wasn’t smart or gifted enough to figure out how to work planetary magick using the Golden Dawn system. Two of my friends, Scott Stenwick and David Griffin, had to study and carefully examine the Golden Dawn documents passed down to us from Crowley and Regardie, and from these they were able to figure out how to work this kind of magick. I suppose that I wasn’t shrewd enough or as dedicated to the Golden Dawn tradition to come up with the same analogous method that they came up with. Instead, I invented something completely new.

This should prove to be an interesting point of discussion, and perhaps the central point of this article. When does a student depart from tradition and invent their own method of performing some magickal operation? I guess the answer would be that whenever that technique or method is not well articulated in the legacy material, or if it seems inelegant, inefficient or just plain clumsy, then the student has every right to create something that is better or more elegant.

Using this logic doesn’t give anyone the right to change everything and attempt to reinvent the wheel, as it were. Yet if that’s what the student wants to do, and if they can pull it off without making a confusing mess of things, then they are fully within their rights to do it. They may upset other occultists in that tradition, or if it’s a reconstruction, then they might do something that has no prior precedent. Regardless, if it works really well and can be readily taught to others, then it has progressed to the point where it has become a new practical technique. The bottom line is that most magicians who are at least worth their salt will ultimately craft their own independent system of magick, even if many parts of it are represented by an ongoing and living tradition, they will put their own unique stamp on it.

So the septagram became for me the central occult symbol of the magick of the macrocosm, representing the higher magick of the seven planetary intelligences, and the art of theurgy and evocation. I still use the hexagram in my magick, but it is used to signify the union of the archetypal masculine and feminine, and I don’t articulate it to invoke specific planetary archetypes. The hexagram is just two triangles superimposed upon each other, showing that the union of the ascending and descending graces is the core of the Great Work. Therefore, I have actually elevated the meaning and use of the hexagram in my magick. I use the simple sign of the hexagram to indicate that the previously generated forces or invoked spiritual aspects are now in glorious union. Perhaps in some manner, I have found a more suitable alternative for planetary magick, and placed the hexagram in a much greater position of honor and respect.

Creativity and experimentation are critical parts of the repertoire of the ritual and ceremonial magician. Without them, the practicing magician will never learn anything new or discover another and better way of doing something. Personal growth, an awakening awareness and an evolving understanding and practice of spiritual techniques are the hallmark of the progressive aspirations of the initiate and the adept. Doing the same thing forever or maintaining a dogmatic unwillingness to try anything new or different are the signs of a failed occult practice. May we all be open minded, receptive and innovative in our practice and appreciation of magick.
Frater Barrabbas
Posted by Frater.Barrabbas at 8:45 AM