Secret History of the Nephilim - Part 1 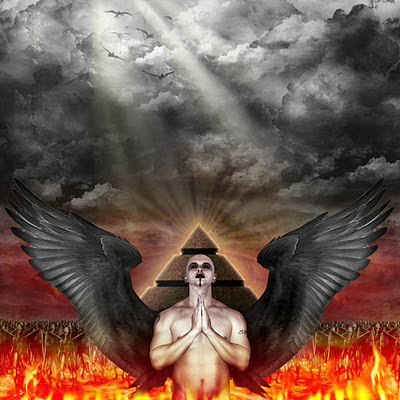 While I was going through my various notes and unpublished tracts on Enochian magick, I came across this piece which, I felt, explained the way in which I see the connection of the Nephilim with the practice and spirit lists of Enochian magick. How I managed to pull all of the threads together occurred through some spontaneous divination, and an apparent spiritual communication from an unknown source. Looking over the content of the communication, I later realized that it was a brief manifestation of my inner spiritual connections showing me a new pathway through the published Enochian lore. Therefore, it became a key part of the unpublished manuscript “Sepher ha-Nephilim,” which I hope to complete and publish some day in the future.

I essentially wrote this tract in the spirit of mythopoetry, and it was not to be taken as either an historical analysis of the socio-religious world, nor does it fit in with any known spiritual literature. I would recommend that you not take this writing as any kind of literal truth, but as a powerful and compelling allegory. Think of it as a magickal and occultic form of mythology and metaphysics. A type of secret history of the Nephilim, woven together like some arcane initiatory lore, and shared only with the newly initiated adept. So, as you read through this article, let your imagination run wild, since by doing this, something of the greater esoteric truth will be revealed.

The extracted text used in this article is also biographical, since the events it describes occurred in 1990 when I was on temporary assignment to Dallas, Texas. While I was there, I had a lot of free time when I wasn’t at work. That period of living away from my home base and sequestered in my furnished apartment turned out to be quite fortuitous, as can be determined by the importance of what I discovered.


Mystery of the Five-fold Formula of the Nephilim

In the Winter of 1990, while I was on temporary assignment in Dallas and away from my home in Atlanta, something really amazing happened to me. I had in my possession a few of my treasured occult books, some blank pads of note paper, my favorite pens and a lot of free time. I began to alternatively meditate and study during the evenings and weekends when I was alone and mostly idle. It was a time of great internal discovery and new insights into established occult lore, since my studies had little distraction from friends and social obligations.

At one of those  times, while I meditated on the mythology of the Nephilim (as found in the Bible and the first Book of Enoch) and pondered their apparent “Promethean” descent and integration with common humanity, I heard a voice from within my mind speak very clearly to me, “The secret of the Nephilim shall be revealed through the chance drawing of five Trump cards of fortune. This drawing shall be like unto their fate, a fortune to which they desired and bound themselves onto with sworn oaths upon a mountain top.”

I was quite amazed when I heard this pronouncement, which was unprovoked by me and seemed without any physical source, since I was quite alone. It was spoken in an archaic manner and with a deep melodious voice with which I was unfamiliar. The awestruck silence that followed in the midst of my perplexity seemed only to mock and taunt me. Then, I noticed my Tarot deck laying before me upon the table, and it seemed to beckon to me. This particular deck was the Voyager Tarot, a favorite of mine and one that I had recently learned to use with much skill and insight. I picked up these cards and began the process of separating out the Trump cards. When this was completed, I took the deck of Trump cards and thoroughly shuffled it, randomizing them as I concentrated on deriving this most secret formula of the Nephilim. I then randomly selected five cards out of the deck and laid them before me. In this manner I was able to depict, by means of the archetypal nature of the Trump cards, the destined mythopoetic rise and fall of the Nephilim. I then began to carefully study the cards that were selected in this fashion.

The first card was “The Lovers,” Atu VI, and I immediately saw an image of the Nephilim admiring the daughters of men and desiring them. I deduced that this card represented the necessity of free choice and free will.  It was this factor, along with their powerful infatuation, that motivated the Nephilim to pursue their earth bound quest, which was integrating with human nature and thereby ennobling it.

The next two cards were “The Hermit,” Atu IX, and “The Empress,” Atu III, respectively. These two cards represented the personages of Enoch Ben Yared and the Daughters of Men who became partners with the Nephilim in all that subsequently transpired. The illicit marriage of the Nephilim or Fallen Watchers with the Daughters of Men produced children, beginning a spiritual dynasty that was also linked to the patriarchate lineage of Enoch.

The fourth card was “The Chariot,” Atu VII, indicating both the process of integration and the power it transferred throughout the newly founded union of Enoch, the Daughters of Men and the Nephilim. The creation of a new spiritual lineage is indicated by this card, with an emphasis on the mystical Grail as its inner-most symbol. The Grail represented the holy containers that each of these exalted women had become, since through them all manner of knowledge and wisdom was revealed. Those who were properly prepared through the occult training of this new tradition were exposed to the guarded secret sexual and alchemical techniques that had become part of this magickal tradition.

The final card, completing the Pentagrammic Formula, was “The Sun,” Atu XIX, which represented the creative freedom and independence that the Nephilim and their associates enjoyed through the careful exercise of their newly revealed occult knowledge.

The complete formula consists of the five associated Hebrew letters, which were Zain, Daleth, Yod, Chet, and Resh, respectively. These five letters and trumps of the Tarot became the reading of the ascending fortunes of the Nephilim. Of course, the missing part would explain the ultimate destiny of these three parties and their offspring, which would be the corresponding descending or falling fortunes of the Nephilim. Everything that rises, must, unfortunately, fall as well.

Additionally, I was able to determine this final outcome of the descent of the Nephilim through the crafty use of the AThBSh cipher, which gave me an alternate five letter formula to examine. Ostensibly, I produced this new formula through a process of letter substitution (Temurah). This formula informed me about the consequences that occurred due to the founding of this new magickal lineage. So I was able to extract the following five additional letters, which were Ain, Mim, Qoph, Samek and Gimmel. These five new letters were taken from the transposition of the cipher applied to the original formula. I performed this operation to determine the reverse of the original formula, capturing a symbolic narrative that described the consequences associated with the actions of the Nephilim. In this manner I was able to realize their ultimate destiny.

What I deduced while analyzing these five new letters was that certain forces had became arrayed against the progressive spiritual philosophies and practices of the followers of the Nephilim, and this conflict caused their ultimate demise. I also saw the subsequent rediscovery and ascendancy of their knowledge at a much later age.

This influx of new material was very thought provoking and required a thorough examination. So in the weeks following this discovery, I was able to make complete sense out of these two formulas. Curiously, I completed what became the story of the Nephilim, their actions and their destiny, in only twenty-one days following that fateful revelation. This is a story that is not at all represented by history, source texts, archaeology or even accepted theology. It is pure mythopoetry, based as it is on the occult thread of the Nephilim. I could even say that perhaps it was directly inspired by them through some kind of inner plane contact. All of this occurred before I had built up the rituals to finally invoke them and hear their stories first hand.
(To be continued...)