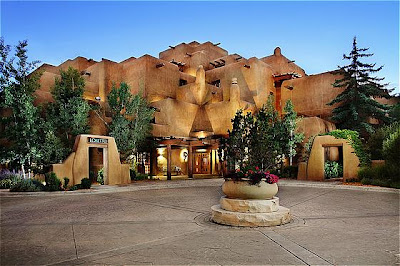 This is part two of a three part biography about the time when I lived in Santa Fe. Continuing with my discussion about the New Age community and its foibles that I encountered back in 1990's.
New Age groups and perspectives were very dominant within the limited population of occultists in town. As a witch and ritual magician, I couldn’t have been more unusual or scary if I tried. My perspectives would either be misconstrued or treated as if I were some kind of perversely evil person. Two events that I remember seemed to really highlight the contrast between myself, a very serious insular occult practitioner with years of experience, and the fluffy, arrogant, naive, and superficial adherents of the New Age that seemed to flourish in that town.

A friend of mine who belonged to the Albuquerque Golden Dawn temple (and had to travel the 130 miles round trip to attend meetings) decided that he would sponsor a group discussion on angels and angelology in town to see if he could identify any interesting local individuals or groups. The discussion group was to last several sessions, but it only occurred once. I was invited to attend this group discussion, but others learned about it through the local occult book store. Those who attended were quite a mix of different spiritual perspectives, but I was probably the truly black sheep in attendance, or more accurately, the wolf in sheep’s clothing. My friend started the discussion and then requested that each individual sequentially in the circle of attendees talk about their experiences with angels and state what they believed about them. Since I was sitting on the left side of my friend, I was the last one to speak. However, what I heard everyone talking about was the most fuzzy, warm and diluted sort of religious nonsense that I have ever heard. It was the very sort of insipid things that many were reading and raving about in various New Age circles at the time. According to these folks, angels were beautiful, wholly good, friendly, helpful, guiding, child-like and sweet, as if the folks there were describing the chubby baby-like cherubs seen in various paintings and sculptures of the 18th and 19th centuries.

It was all much too sweet and cute for my tastes, and I found myself disgusted, bored and brooding about how I was wasting my time listening to these people. Almost all of the attendees were middle aged or older women, and all of them were obviously very proper Christians with some minor New Age leanings. When the discussion finally came to me, I stunned everyone by talking about how frightful, awesome and terrible many angels were to human sensibilities. I regaled them about the fierce Seraphim and Kerubim, armed with swords and spears, and that they fought wars, killed enemies and warded the Hebrew God from the profane. I also said that if anyone ever had a real encounter with a supernatural being like an angel, that they would probably shit their pants unless they were properly prepared. Of course, what I had to say was highly objectionable to all (except my friend, who was holding himself from laughing out loud), and they looked at me with loathing and outrage as if I had crawled out of some crypt from the bowels of Hell itself. Needless to say, they hurriedly left soon after I had said my piece, giving me pitying and hurt looks, and I am sure that I was the talk of their social circle for a long while, though I doubt if any of it was positive.

Another strange situation showed me how the New Age community was ravenously appropriating Native American shamanism into their practices, although without the usual care and sensitivity that such appropriations should require.

There was a household of women who had put together a supposed “pagan” New Age temple of the Goddess, and it was run by a matronly woman who had moved to Santa Fe from Dallas, Texas. She kind of reminded me of a Tammy Fey of the New Age community, overly made up and highly pretentious. She and her adult daughter (who was something of a hottie) espoused supposedly pagan sentiments about the Earth Mother and the Great Goddess, and they had gathered together a large social group, consisting mostly of women and couples, to practice a kind of New Age shamanism. I found her and her group to be mostly unschooled and spiritually superficial, but they seemed an earnest and nice enough group of people. Since there was little else that was going on in this vein in Santa Fe, I decided to accept their invitation to one of their gatherings. I should have known in advance what was really going on, because in order to attend this gathering, I had to pay $120 to help defray the expenses. The money collected was used to purchase a quantity of ground up magick mushrooms and XTC tablets, which were taken together to simulate the experience of mushrooms and ayahuasca. Of course, it wasn’t at all the same, and also, none of the important Native American practices and beliefs were incorporated into this event. It was, in a word, a New Age drug party, using some pretty powerful drugs to facilitate the breaking of social boundaries and inducing some kind of ecstatic release.

I had fancied maybe getting to have sex with the matron’s calmly daughter, but of course, that didn’t happen because there were too many people there (and she wasn’t interested). I brought my flute and entertained everyone with my music, but after a time, I found myself more interested in going deep within myself to fully experience the powerful influences of the drugs. Supposedly, that kind of antisocial behavior went against other people’s interest in taking combined baths, naked massages, getting “touchy and feely” and invading each other’s space. (The daughter managed to evade most of these attentions as well, but with better grace than I was allotted.) I endured the long session of being drugged out of my mind, which lasted the whole evening, and then in the early morning, without any apologies to those who acted so concerned about my social reticence (even though they didn’t know me), I got into my car and made my way carefully home to crash and reflect. I had a much better time once I was home and alone with my drug addled thoughts and feelings.

Afterwards, I politely told the matron that I wasn’t interested in any future gatherings and quickly disconnected from her and her group. I later heard that one of her sessions had ended in disaster when a young woman who was attending had passed out and died from taking the combination of drugs. She supposedly had an allergic reaction to the XTC and it killed her. Her death may have occurred because she was taking other medications and forgot to tell anyone, or perhaps due to some preexisting health condition - who knows. That event not only terminated the group’s activities, but likely put the matron and her drug procurer (and others) into jail for awhile.

I wasn’t surprised by anything that had happened because I felt that they were too inclusive, unknowledgeable of what they were doing, and that sooner or later, someone would have an adverse reaction to the combination of drugs. It proved to me that what you don’t know can kill you, and that a loose amalgamation of New Age naivety, illicit spiritual appropriation and a lack of spiritual discipline can be highly disastrous.  My periodic loneliness made me reach out to groups and individuals that I wouldn’t have normally bothered to contact, and such attempts only showed me that I, like Tigger in Winnie the Pooh, was the only one of my kind in town. However, unlike Tigger, I wasn’t happy about that fact.

As a single man, I also made many attempts to find a lover, but they usually fell short, too. The one girlfriend that I did acquire (after living in Santa Fe for over two years) was also living with a flamingo guitar player who had been one of the local town drunks, now rehabilitated. He had the reputation of being quite a jealous and violent man, so we had to engage in our clandestine relationship at times when he was otherwise disposed. (This duplicity went on for a year or so until her lover finally got angry at her reticence to marry him, and left her when he found a suitable Trust Fund Brat.) She was one of the better known local belly dancers in town and was introduced to me by some mutual friends. She lived many miles north of town on a small ranch (exemplifying the term ‘land rich and money poor’), and we would discretely meet up at my place in town.
We seldom went out, since too many knew her and would ask questions about me, so our relationship had some pretty severe boundaries. I taught her some rudimentary magick and initiated her into witchcraft, while she entertained our more carnal interests. She was quite a beautiful woman, but was also high strung, willful, emotionally volatile, stubborn and independently minded, even though she sought and did receive some financial support from me. That relationship lasted until I moved away from town some years later, although she never seemed interested in making me her primary relationship. I was always, and conveniently, the “other” man in her life. I later found out that this situation is rather typical of Santa Fe since there is a dearth of potential mates outside of the Hispanic and gay communities.

As for my career, I had the wonderful opportunity to work for a woman named Jo who ultimately guided and helped me to change the entire direction of my career. Through her I got the training I needed to transform myself from a mainframe programer and business analyst to a decision support analyst, UNIX programmer and database administrator. I learned the arcane art of data warehousing and I have continued to expand on that knowledge and capability all of the years since that time. It was a brilliant career move for me, since it meant that I wouldn’t likely experience any kind of downsizing or employment interruption due to the later fad of off-shoring technology jobs, which started to happen only a few years later.
My area of expertise was in government health services (such as Medicaid and Medicare) in combination with my knowledge of developing, building and maintaining data warehouses that served as the source systems for all credible reporting, analytics, fraud and abuse detection, and policy management. This was obviously a level of expertise that couldn’t be exported to some DBA in India or China, since such policies didn’t exist anywhere in the world except in this country. Therefore, I had a certain amount of job security because of what my boss did to push my career in a certain direction.

Jo also was something of an occultist, and was steeped in the study of the Fourth Way, which consisted of the writings and practices of Gurdjieff and his followers (such as Bennet and Ouspensky). She managed to find a very important group in Santa Fe that actually practiced what the Fourth Way followers called the “Work,” so her move was spiritually fortuitous. Having a boss who was also an occultist was also very helpful, and I relaxed my typical discretion and reticence concerning my own studies and practices. This would come back to haunt me later on, but luckily it never caused me to lose a job promotion or get terminated. Later on, I would resume that discretion, but that single period of relaxing my boundaries did cost me something of my anonymity for a while.
(To be continued..)
Frater Barrabbas
Posted by Frater.Barrabbas at 8:00 AM