Secret History of the Nephilim - Part 3 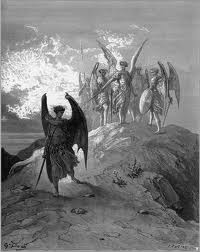 This is the third and final part to the Secret History of the Nephilim series. This part discusses the alternate formula that assisted me in determine the descending fortunes of the followers of the Nephilim, their ultimate fate, and the legacy that they have left behind for us to realize.
The application of the Temurah cipher of AThBSh to the Pentagrammic Formula of the Nephilim substitutes ZYDChR for OMQSG (where the O is actually the letter Ain). This formula represents the fall of the Nephilim and the consequential retaliation against their illicit joining with humanity. It is critically important that we disregard the mythic trope that Yahweh cursed and punished the errant angels who deserted their heavenly posts and profaned themselves with women. It should instead be interpreted as the allied forces of progressive spirituality encountering terrible foes in the forces of orthodoxy, as it always does. The establishment of the spiritual and political power of an organized religion has always invested its leadership with a powerful desire to maintain the status-quo.

This conservatism has the compelling force to maintain the beliefs of a religion as a doctrine and a dogma, which blocks all possible change while enveloping its followers in a static social organism. The powers of progressive spirituality liberate the individual so that one can engage in a natural processes of social and spiritual evolution. It is the very nature of the descent of the Absolute Spirit, disguised as incarnated divine beings (avatars), to cause the ascent of liberated humanity. These two processes join together to form part of a larger pattern. Yet the forces that directly oppose this process of natural spiritual evolution do little more than give it greater power, endowing it with a greater facility and more clever stratagems for success. So, even the rigid adherents of orthodoxy actually play a part in the greater plan of spiritual evolution.

To clarify this point even further, it’s necessary to fully interpret the five new letters that were derived from the process of Temurah, thereby describing the struggle that the establishment of the Nephilim precipitated.

Ain - The Devil, Atu XV: The Promethean descent of the Nephilim violated the spiritual status-quo of human-based religious institutions, unleashing upon spirit and human alike, a contagion of inner plane contacts. Although the contact between human and spiritual agencies, as fostered by the Nephilim, was strictly controlled through the transformational process of initiation, it was only a matter of time before this process became abused by unauthorized individual use. Any system that is devised and used by humans will eventually fail unless it is continually regenerated. The spiritual intelligence who promotes spiritual evolution require that the instrument of progressive indoctrination be in a constant state of modification and growth. However, religions tend to become ruled by the powers of inertia. As the magickal system of the Nephilim became more vulgarized, its vibrant creative core slowly became inert. Magickal systems should retain a certain degree of secrecy and limited access so that their unique individuality and the purity of their inner plane contacts remain inviolate, otherwise they will be unable to survive intact.

Mim - The Hanged Man, Atu XII: The new system, which the Nephilim had established, allowed for a limitless degree of personal freedom and personal power; but this quality could also become chaotic and anarchic. Early societies required a greater amount of social cohesion than later cultures, even though later cultures appeared to demand far more cohesiveness of its peoples. The freedom of the village gave way to the tyranny of the city state. So the positive impact that a divinely born individual could bring to bear upon earlier societies was markedly less in later and more complex city states. It became necessary for the existence of an avatar (manifested godhead) to be realized through miracles in life and transformation within death.

The Nephilim could no longer live among humans without profoundly impacting them and powerfully influencing their free will. So they retreated to the abysmal nether worlds (a form of hyperspace) that lies between all time and space, emerging only at times of paramount need, otherwise existing in their guarded solitude. Those great spirits who had sacrificed their spirituality to partake in humanity could neither return to their formal existence nor remain in perpetuity in their human role. There was no place for them to finally reside except in a world that consisted of both spirit and physical matter, yet was neither. After their transition, the secret knowledge that they had built up was slowly lost and dissipated, until now, only echoes of it exist in the world. Yet this knowledge is still fully possessed by them and can be revitalized in our world, if only a way could be found to enter into their world and receive it.

Samek - Art, Atu XIV: The occult knowledge, myths and esoteric philosophies that the Nephilim founded managed to continue in some form or another, as time passed, and the various fragments of this lore was added to other occult philosophies. The Nephilim attempted to engage in a limited and indirect means of influencing humanity from their place of solitude, but this avenue became completely closed off. Only in dreams and in visionary magick did the potential of their teachings seem to survive. In time, through the methods of ritual and ceremonial magick, the knowledge of the Nephilim became more known and partially revealed (witness the skrying sessions of John Dee). Only echoes of this distant and isolated knowledge, in its pure and empowered form, still lingered in the world. Enochian magick, as unwittingly revealed by Dee, brought some of these themes forward, but still there was more mystery and an incomplete system of occult lore that confronted those who pored over his magickal diaries.

What is required to unleash the true knowledge and power of this lineage is for seekers to pass through a special transformative initiatory process that will reveal the manner of gaining access to the hidden domains of the Enochian lineage. In this manner, the Nephilim will eventually become rediscovered and perhaps even reincarnate into new forms, leading humanity as they did in the ancient times of myth and legend. Their occult knowledge will be restored and updated to the modern age, making it far more useful than the current fragments of their knowledge spread through many disciplines and cultures.

What this means is that the power of magickal creativity will directly determine the outcome of the manifestations of events, so magick, philosophy, science and art will once again become united and distinctly relevant in the post modern world, after a long slumber through the ages.

Gimmel - The Priestess, Atu II: Two important things need to be revealed before the heralding of the New Age of Magick and Mystery. The first is the ascendancy of the Feminine Spirit and the realization of the critical importance of women in spirituality. The Nephilim succeeded in merging the two polarities of ancient culture, which were the Patriarchate and the Matriarchate. We have come to a time where the absolute rule of the old patriarchy has ended, but what remains is neither a reintegration with nor a re-emphasis on the feminine. Where there is fear and chaos due to the fears of uncertainty associated with social change and spiritual transformation, then the time for change is long overdue.

Whatever conservative political forces and orthodox religious societies seek to achieve in their attempt to guarantee power and stability, nothing can keep the status-quo from changing, whether by false assurances (propaganda) or draconian social controls. Those who are open to change, accepting both the positive and negative forces of our future heritage, will gracefully achieve their own self-apotheosis. Those who align themselves with reactionary ideals will ultimately reap the rewards of backing the wrong course. An incapability to change in changing times has its own eventual curse. The power of the Feminine Deity as the Great Goddess is already awakened in our world. Soon it will act as the symbolic transformer of all Western Culture.

The second event concerns the spiritual crisis that is occurring particularly in the West, where the old religions are dying and new ones are arising in their place. The institutions of orthodoxy are failing to promote the kind of group significance and destiny that has seemingly satisfied the ranks of individual believers for centuries. In the past it sufficed that religions dictated the meaningfulness of life and its ultimate purpose through the societal group as a whole. Now, the breakdown of mass religion has caused individuals to uniquely seek their own personal salvation and destiny. This individual search will lead people away from the mainstream religions of the prior age and herald the coming of the New Age.

An answer to our collective problems lies not in orthodoxy, which actually has assisted in fostering them, but in the individual syncretistic approach to spirituality that evolves into a custom methodology of personal ascendancy and spiritual growth. A fully spiritualized person will have a tremendous impact upon those who are family, friends or associates. Although this process will begin with very few individuals, it will become contagious, spreading throughout the social fabric of the Western World.

This is the beginning of a social spiritual revolution that will fulfill the secret destiny of the Enochian system of Magick. It  began with the descent of the Nephilim in the dim mists of the mythic morning of humanity and it will end in the ascendency of the human race as a unified godhead.
Frater Barrabbas
Posted by Frater.Barrabbas at 8:45 AM