Secret History of the Nephilim - Part 2 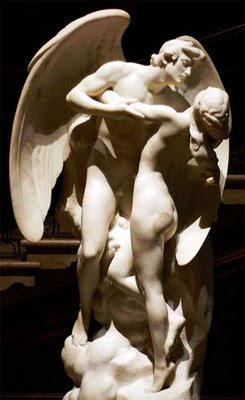 The Pentagrammic formula of the Nephilim has been revealed as Z, Y, D, Ch and R, (pronounced Zidecher). I have created a Tarot card reading that tells the story of the ascending fortunes of the Nephilim, associating each phase of that story with the corresponding Tarot Trumps.

Zain - The Lovers, Atu VI: What prompted the Nephilim to manifest on Earth and take wives of the Daughters of Men was the choice, rather Promethean, of whether or not to assist in the spiritualization of humanity. Of course, they were also smitten by the fair features and natural wiles of human women, and desired to ground themselves completely within the flesh of these women. Their choice represented the noble and even prescient sacrifice of their static but eternal spiritual state of existence, ultimately but not unwittingly, for the sake of Human spiritual evolution. This explains the bond established between them and their combined intention through the means of mutual oaths, and the joining that they initiated with women. We are told that the love of the Deity for humanity causes its ennobling, and perhaps this was just another example. The product of this joining is known as the nature and the cycle of the Avatar (Magus), those divine humans who have shaped the course of history and influenced the creation of cults and religions. These avatars, or divine humans, have nurtured and shaped the spiritual dimension of human nature since earliest times. In this context, the card of the Lovers symbolizes the powerful spiritual process of involution, which it turn sets up the necessary stage for the corresponding evolution of spirit.

Yod - The Hermit, Atu IX: This card indicates the solitary path of the Hermit, representing an alternative to the usual path of the family clan and its leadership. I felt that this card represented Enoch as someone who branched off from the clan of early mythic humanity and forged a new path of esoteric and mystical practices, to be performed by the solitary seeker.

From the perspective of our post modern age, the patriarchate lineage of Enoch (as leader and independent seeker) represents an alternative magickal lineage to the Masonic initiatory line and its predecessor, the secret guild or society. This lineage would have originally been associated with the ancient and archaic priesthood of the Nomadic Bedouin, handed down from father to son (or mother to daughter) typically without any measure of worthiness, but necessarily dictated by family survival. Such a lineage gave the leader personal freedom and autonomy once the old line had passed to him, but it also included responsibilities for guiding the clan or cult. It also forced the other members of the clan into strict obedience. However, such a close knit clan or cult allowed for certain checks and balances against the leadership, forcing him to be generous and compassionate towards his followers. The leader was guided by the grace, understanding and also the tolerance of those ruled. For those who were ruled could justifiably overthrow a bad leader, and from their ranks, choose a new one. This alternative path branched off of the Magician Priesthood of Melchisadek, Abraham and Moses. Eventually, the rule became very loose and was associated specifically with an egalitarian Star Group organization and a series of measurable transformative initiations.

The Catholic Church has continued the progression of this lineage supposedly through Jesus Christ, from Peter and Paul, establishing for itself and the church, the Apostolic Succession.  However, certain Bishops broke with the solidarity and spiritual monopoly of Rome, (and some, like the Eastern Orthodox Priesthood and certain Gnostic sects, were never really part of it) and turned their pursuits to more occult orientated endeavors.  Presently, through the Old Catholic Church, and its scion, the Liberal Catholic Church, the availability of this lineage has become more pronounced as occultists seek to undertake the disciplines of the Magician Priesthood to expand their base of knowledge and initiation.

The Hermit card, therefore, represents the institution of the Magian Priesthood, which once held great prestige and authority, then was lost, and in the present age, it has been rediscovered.

Daleth - The Empress, Atu III: The third component of this process of spiritual integration (Nephilim, Enoch, and the Daughters of Men) was the independent lineage of the Priestesses and the crafts that they received from their union with the Nephilim. These crafts represented the facets of the new occult knowledge established by the translation of the wisdom received via the Inner Planes or Worlds of the Spirit through the Nephilim. Also, the marriage of the Daughters of Men can be interpreted as the forming of alliances and the importance placed upon the power of the Feminine Spirit as the Goddess physically represented by her priestesses. The birth of children, also considered the Nephilim, (here interpreted as giants or great “Men of Names”) represents the establishing of tribes or sub-organizations that contained the physical lineage of kinship (either spiritual or congenital). It also represents the fusion of the genetic heritage of humanity with that of the Sons of God, thus producing divine off-spring or Avatars. These groups became the possessors and preservers of priestesses dedicated to the secret spiritual arts.

Chet - The Chariot VII: What was derived from the joining of the lineages of the Patriarchate of Enoch and the Matriarchate of the Daughters of Men, with the blessing of the initiation of humanity through the descendant avatarship of the Nephilim, was the creation of the first Magickal Order of progressive spirituality. Within this new union could be found the resolution of the age old conflict between Agriculture and Animal Husbandry (hunting and gathering), which symbolized the polarity between Village dwellers and Nomads, and their resultant natural animosity. Also, there was resolved the differences between feminine based spirituality and masculine based spirituality. However, the actual focus became orientated towards the achievement of complete liberation of the individual from all limitations; this freed humanity from its bondage to traditional ways of life and elevated their souls to an exclusively esoteric perspective.

The scion of the union of supernatural beings and mortals created a race of spiritual nobility that established all legitimacy through its creation of a physical lineage (the Sang Real or Blood Royal) realized through both physical and spiritual techniques. It endowed its followers with special powers and prerogatives. The family of the Nephilim became an anointed and revered lineage whose mythic symbolism and mystic power was distantly echoed in the much later lineages of the exoteric church and the divine rule of kings - but these are considered degraded imitations. Equality and egalitarianism associated with this secret lineage also manifested within the Pagan Mystery Traditions, whose secret members existed in respectful equality regardless of caste or life station, and who held positions of responsibility based upon merit rather than heritage.

Resh - The Sun, Atu XIX: The efficacy of the resultant synthesis or heterodoxy of these three lines established the ultimate structural basis for a new spiritual order, which ultimately became a variant of the occult wisdom known as the Perennial Philosophy. This underground bastion of secret wisdom would continue to exert its influence in many exoteric institutions, but would never be under the control of any one person or group. It would span the boundaries of nations and eras, and bridge the differences of language and custom, building a universal consensus consisting of many and often contradictory doctrines. The occultism of the individual seeker frees one from the narrowness of secular and sacred institutions and establishes a precedent for the derivation of personal significance and direction. This world of equality and unanimity was kept to a large degree both secret and inaccessible to the larger masses of humanity, therefore it remained an elite cadre of selected initiates. However, in the advent of the New Age, this lineage will avail itself to all who desire membership and will fulfil its destiny by being one of several possible paths for true spiritual enlightenment in the West.
(To be continued..)
Frater Barrabbas
Posted by Frater.Barrabbas at 8:00 AM