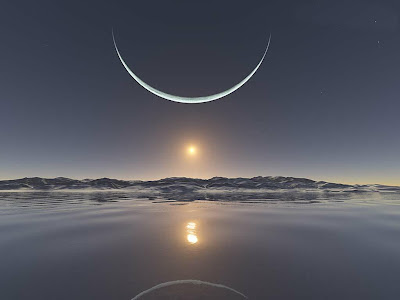 Since all of the elements that are required to build up a lunar mystery ritual working have already been covered in detail (in this blog), we can now show how they can be assembled to produce a ritual magickal system that can utilize the power and mystery of the moon to produce qualified changes in the magician’s material world. After all, this is one of the purposes of learning and mastering all of these elements - to become proficient in changing the material world through magick. As I have stated previously, the moon and its cycle is the key to making effective magickal changes in the material world. Certainly, you can work magick and ignore the moon altogether, since nothing should interfere with the ability to work magick whenever it’s needed. However, what I have found out over the many years of practicing magick is that focusing on the moon will insure that magickally established changes will be more profound and lasting when the phases of the moon are incorporated.

So, what are the elements that are needed to build a lunar mystery ritual working? I have said that we have already covered them in previous articles, but perhaps a review is in order so you can refresh your mind about what I have already covered. If we list the elements, it will become patently clear what those items are, and I can reference the appropriate links so you may revisit them if required. Coincidently, there are seven topical elements that are required to build a lunar mystery ritual working. These elements are:

These seven elements represent the essential components of the magick of the lunar mystery, although the real trick is to be able to weave them together into an elegant and concise ritual working. That, of course, is the subject of this article. Essentially, there are two aspects to this kind of working, that of the lunar mystery working, and that of a specific working to effect a change in the material world. These two workings are merged together to formulate a series of three ritual workings, to be performed between the advent of the New Moon and occurrence of the Full Moon. You could perceive these three workings as representing three different phases of a larger overall working consisting of 1.) setting the foundation, 2.) projecting the desire, and 3.) celebrating its climactic release. The three phases characterize the methodology of this kind of magickal working, and it is based on a more simpler pattern incorporated in some witchcraft traditions.

This kind of ritual working series would be impossible to perform without the innate qualities and capabilities of the spiral vortex. Unlike a simple working incorporating a cone of power, the vortex allows for the seamless re-entering of a magickal power structure so as to increase and amplify its influence. This kind of activity is incapable of being done except through the artifice of the spiral vortex, which allows for the sealing and unsealing of power structures, and to avoid the necessity of performing banishing rites and building up the magick from scratch. Instead, there is a certain continuity to the overall working, even though it is split into three separate working sessions. These separate working sessions incorporate the of Law of Three, which is the initial establishment of the power structure, the full empowerment and the final exteriorization. A full working of this type also incorporates the capabilities of sigil magick, where that sigil becomes the operant link for the overall working.

The environment for this overall working is the lunar mystery cycle, which has already been discussed. This environment is established by rituals that would normally be used to penetrate the lunar mystery, which is that constant monthly variable of light and darkness, and its association with all living things. To recap that ritual pattern, let me list the steps that would be used in performing a lunar mystery working.

2. Erecting a spiral vortex - the energy field that most “resembles” the sealed container of a telesterion is a vortex. The vortex has the properties of amplifying and isolated all energies and actions performed within it. This makes the perfect foundation for performing a mystery.

3. Underworld Gateway - a western aligned gateway establishes the internal transition of the isolated chamber of the mysteries, and draws it deeper into the spectral unconscious domain of the underworld.

5. Establish an inner circle - overlaying the cross-roads is an inner circle, representing the place of the interstice where Spirit resides and where one may actively engage with it. The inner circle is drawn and then opened like a gateway portal.

6. Introit of the Mystery - the preliminary rites that are performed just prior to the activation of the mystery rite are as follows:

Erection and veneration of the World Pole (Stang): The celebrant places a special sacral staff or Stang in the center of the circle, acting as a conduit between all worlds. The staff or Stang may be set up to stand by itself, or it may be held by the celebrant or an accomplice.

7. Mythic Theme - the mythic theme is presented as a narration, with symbols and fetishes used to emphasize the theme of the mystery. Once the theme has been fully presented and completely experienced, then the special sacramental food and drink are shared (this is the last thing that is done). Of course, in the case of a lunar mystery rite, the mythic theme would revolve around the eight point lunation cycle and the four lunar phases. Each of these points and phases would have a specific spiritual and magickal significance.

8.  Inner circle is closed, sealed, then the four or eight nodes of the crossroads are sealed with sealing spirals. Then an eastern gateway is opened and the Celebrant, along with accomplices, ascend out of the chamber of the mysteries and into a new dawn of rebirth and restoration, passing the eastern gateway much like the rising of the sun. (The western gateway points are sealed just before the eastern gateway is established.)- This is, of course, the double gateway representing the full cycle of descent and ascent.

9. An outer feast is assembled, where food and drink are blessed and shared. A portion of this feast is given as an offering to the godhead associated with the mystery. The rite is concluded.

Considering that this lunar mystery rite is rather long, and focused exclusively on the lunar mystery itself, variations on this pattern would have to be developed to incorporate a specific working to project a wave of change into the material world. That pattern would incorporate the pyramid of power rite, using one of the forty qualified powers and a sigilized link, and it would look like the following ritual structure. The only qualification that this ritual would have is that it would be performed within sacred space (i.e., a consecrated circle).

Establishing the Power Base:

2. Setting the Five points of the magick circle, in a deosil progression (Angles and Ultra-point) with the base element to the four Angles and Spirit Masculine to the Ultrapoint, using the invoking Pentagram device.

3. Drawing together the lines of force of the five points, using the sword to create the geometric pattern of the Pyramid.

1. Circumambulation spiral deosil to the center of the magick circle, with three revolutions (walking the spiral), and resonance of the charged field.

2. Centering power through the Self (Mesopoint) with the power chant.

3. Charging the Magickal Link. Summoning the Qualified Power (qualifying the base energy).

1. Exteriorization – circumambulate spiral three times widdershins, starting in the center and proceeding to the outer periphery of the circle, using extreme resonance with a releasing power chant.

These two patterns, the lunary mystery and the pyramid of power, can be used together to formulate the lunar mystery working in three parts. What this means is that the first and last part of the working will focus on the lunar mystery rite and the lunation types of the moon of the first crescent and the full, while the middle rite (occurring as the moon is waxing gibbous) would be focused on generating and projecting the energy of the spell. Positioning these three workings in this manner creates a kind of wrapper for the overall working, and ensures that the power of the moon is the foundation for the projected spell.

This second or middle working, then, would have a slightly different ritual pattern than the lunar mystery rite proper, incorporating in its core the pyramid of power ritual. How this is accomplished is to remove the typical focus of the ritual and replace it with the pyramid of power working. I would imagine this working to be succinctly shown in the following list of steps.

1. Perform the mystery working, from step 1 to step 5, where the inner circle is established within the cross-roads.

2. Declare the intention and unveil the sigil - then perform an intense focused meditation on the sigil. (The sigil is then charged with the operator’s breath, incense and making appropriate signs over it.)

3. Perform a brief (and shallow) godhead assumption. (All workings within ritual magick engage one’s personal deity, and through it, to perform the magickal operation.)

4. Perform the Pyramid of Power working within the gateway, cross-roads and inner circle ritual structure. (This includes all of the steps associated with establishing the power base, summoning the Qualified Power, and then, releasing it through a process of exteriorization.

So that is the ritual pattern for the middle working, where the actual empowered spell is released into the material world. However, that act of releasing is done as the moon is powerfully waxing, and when the full moon occurs, the empowered spell is fully realized, imprinted as it is with the temporal footprint of the lunar cycle and the season of the sun. These three rites focus and raise the inherent transformative powers of the moon, intertwining them with the empowered spell, and ensuring that what has been intended becomes imprinted into the material reality of the operator.

In my opinion, there is no more potent combination of magickal workings than an empowered spell integrated into a focused realization of the waxing cycle of the moon. A magician could generate a talisman or even evoke a goetic demon, but that would be far more elaborate and involved than this simple methodology. It is made more complex by the fact that the lunar cycle is integrated into it, but that only assists it in becoming a manifested quality associated with the magician’s temporal domain.

As I have said previously, you don’t have to integrate your working with the lunar cycle, but doing so will produce a much more profound and long term effect.

Examples of these specific rituals can be found in either of my two books, “Disciple’s Guide to Ritual Magick,” or “Mastering the Art of Ritual Magick - Grimoire.” I not only discuss the mechanisms of these rituals, but give a very pertinent example of how they might look. In the “Mastering the Art of Ritual Magick” series, I present rituals that require customization, allowing the magician to formulate a body of rituals that represent his or her own personal system of ritual magick.