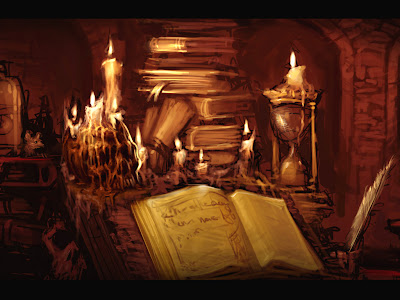 We have covered quite a bit of territory in this blog so far, and now I want to show how everything that I have written in the past can be assembled together to form a unique grimoire of ritual magick for the intermediate or advanced pagan or witch. We should keep in mind that when I define ritual magick, I am, of course, speaking about the magickal rites blended seamlessly into the liturgical rites. As far as I am concerned, they are one and the same, which is what makes modern witchcraft and paganism so unique. Unlike the past, particularly during the period of pagan antiquity in Europe and the Middle East, in the present time there are no prohibitions in the Western world for practicing magick along with religious rites. There are some important reasons for combining these two practices into a common spiritual and magickal discipline, and while we have covered that in past articles, we should touch on it again as we list the rites and practices of the pagan ritual magician.

We can divide this pagan grimoire into four categories, where each category has its battery of rituals and practices. These four categories are: core rites, key practices, magickal workings, and religious and mystical exercises. Of these four categories, magickal workings contains just the basic system of materializing magick. The other three categories are mostly comprehensive and therefore, would require very little additional lore. However, let us examine each of these categories and see what they contain. We will find that the elements of each category contains rites and practices already thoroughly covered. The task that the erstwhile pagan magician must perform is to write up and assemble these rituals into a single body of lore, which is spiritually consistent throughout.

Core rites: The most essential workings are the mystery rites of the Moon, Sun and the Self (Initiation). The phases of the moon and the seasons of the sun determine the overall cycle of workings and the performance of rites. The solar cycle is used for connecting to the earth and its overall process, and the lunar cycle is used for performing materialized magickal workings within the internal psychic mysteries of all living things.

These mysteries are both magickal and liturgical, but represent the continual periodicity of the magickal calendar. Throughout these various lunar phases and solar milestones are the actual points of spiritual transformation for the individual practitioner, who through the constant practice of ordeals and ceremonies, will also grow and evolve. Rituals structures used in the core rites are the spiral vortex, double gateway, cross-roads and the inner circle. There are also specific themes for the lunation types and phases, the seasonal full moons, as well as the calendric wheel of the year associated with the solar seasons, and the greatest mystery of them all, which is the twenty-two stages of the cycle of initiation.

Key practices: These are the practices that establish and maintain a proper spiritual alignment, as well as performing basic preparations and the essential capability for mind-control. We have already defined the practices of alignment as devotion, invocation, godhead assumption, communion and spiritual service. Perhaps the most important of these rites and practices is godhead assumption, since everything else is pivotal to this rite. Preparatory rites and practices would include daily meditation and contemplation sessions, periodic divination and self reflection, study and using the power of allegory. Also included would be ablutions (bathing), prayers, preparatory meditation, and circle/grove consecration (making sacred space). All of these rites and practices are thoroughly memorized and practiced on a regular basis.

Religious and mystical exercises: These are the pagan or wiccan liturgical practices that are not covered in the previous two categories (core rites and key practices). Such practices would be based on the operator’s base religious affiliation, and would represent his or her presence in the community. Adapting the lunar and solar calendars to one’s basic pagan spiritual practices and their associated spiritual pantheon is a very important task, since it adds continuity to the practice of magick and liturgical ceremonies. As an example, the traditional rites and ceremonies associated with the eight Sabbats and the thirteen Esbats, and thereby integrating them into a solitary magickal practice would represent one of the objectives of this category. Another area is the development of the magician’s personal religious cult, where his or her focused Deity becomes a representation of the magician’s higher self. Practices that are performed around the shrine, with its statues, symbols, fetishes and offerings, and the various associated devotional activities would be a prime example of this category. So would any form of godhead mediation performed for the benefit of the members of one’s pagan lineage, or even sympathetic outsiders.

Magickal workings: These rites are associated with any material based objective that the magician might seek to realize. The pyramid of power rite, which can generate any of the forty Qualified Powers, is the first level of magickal workings that the magician can easily employ. The lunar mystery is the core practice where the pyramid of power rite can be deployed through a variation on the mystery pattern. The methodology for performing the pyramid of power within the lunar mystery working has already been covered. However, the structure of the lunar mystery rite is such that other and more advanced workings could be worked within the same overall structure. This would allow for the employment of an elemental octagon, for instance, or even for talismanic working.

Perhaps the most important feature of this kind of ritual system is that it has the qualities of being performed within a modular structure. What that means is that a single ritual can be used to produce a number of different energy structures. Although there are forty unique Qualified Powers associated with the matrix of ten godhead attributes and the four elements, there is only one ritual which is used to generate that force. All the operator has to do is to change the attribute symbology and the invoking pentagrams, and then the generated power structure is different. Typically, when I write such modular rituals, I leave blanks for the key symbols and their associated ritual devices. I also produce a table and place it in the ritual appendix so that I might use those specific symbols and qualities in an actual ritual. A modular ritual is easy to use and easy to follow when performing a working, since I don’t bother to fill in the blanks with every possible variation. I would recommend this approach to my readers when they go about writing their own rituals.

One other mechanism that is used in this simple system of pagan ritual magick is the ubiquitous sigil. Since I use the sigil as an operant link for the generation of the Qualified Power, it performs two duties for one specific working. It can stand by itself and act as a magically qualified tool (once it is consecrated and charged), and it also functions as a link for the spell. The sigil is a symbolized construction representing a specific desire, and as such, it is inherently magickal even without performing the pyramid of power working. Associating the sigil with the Qualified Power causes it to be imprinted, and exteriorizing it will ensure that the desire is projected into the material world. Once used, the sigil can be destroyed, or can be kept and reused to intensify the specific objective with further workings. If a sigil has a generic desire that could be used to satisfy a number of different scenarios, then it becomes something akin to what Spare referred to as his alphabet of desire.

Examples of all of these rituals and practices associated with the four categories of a functioning pagan grimoire can be found in my published book, “Mastering the Art of Ritual Magick: Grimoire.” I would recommend that if you are serious about assembling the rituals for your own personalized system of magick, then acquiring this book will greatly help you to accomplish your desire to possess and actively use your own grimoire of rites and practices.