Elemental Association of Wands and Swords 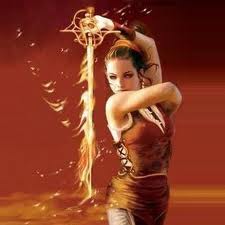 I knew that this thorny issue would show up when I posted my last article on extending the basic tool set, giving the standard Golden Dawn element associations for the four archetypal tools. There is some controversy associated with whether the Wand is to be attributed to Air or Fire, and the same is true for the Sword. I would like to present the following considerations for everyone to examine and ponder, as I originally have done. There isn’t any correct attribution, because attributions are not doctrines or part of some dogma, they are just associations that aid in refining a definition.
Here is a piece that is distilled from my book MARM - Foundation, which I think will explain how these two conflicting associations occurred. Of course, my position is that either one is correct if used consistently.

Ritual and ceremonial magick use various tools to amplify and project the powers of the Elements, and to perform other tasks as well. The organization of the four tools as associated with the Four Elements is a recent development and can’t be traced prior to the late 19th century.

If we use the Greater Key of Solomon as a typical source of the usual magickal tools, we will find that not only are there a white and black hilted knife, but also a dagger, a scimitar, a sickle, a poniard, a burin, a staff, a wand, as well as a sword. Various planetary talismans and the lamen (pentacle or seal of Solomon) rounded out the repertoire of the classical Solomonic magician. There were also the temple furniture, brazier for burning incense, an inscribed magic circle, various vestments, jewelry, and other accouterments particular to the practice of ceremonial magick.

All of these tools had very specific uses, and each was specially consecrated and engraved with magickal sigils and Hebrew letters. This regimen of magickal tools varied from grimoire to grimoire, and although there were similarities, there was no accepted standard except for what that specific tradition dictated. There was also no system of organizing the tools and no symbolic correspondences for them either. Magickal tools were purely operational and used for very specific purposes in ritual, and they had no additional symbolic meaning nor associations. Curiously enough, the list of tools didn’t include any kind of cup or dish, which would have been identified as Christian and associated with the Catholic Mass.

What caused the tools of magick and their associations to change was the incorporation of the Tarot into the Western Occult philosophies and magickal practices. The Tarot was examined and given Qabbalistic attributes, and the systems of ceremonial magick were influenced by that association and began to be organized in a fashion not previously known. The four suits of the Tarot, being Rods or Wands, Swords or Epees, Cups and Coins or Pentacles became the symbolic analogues for the Four Elements, which were also associated with the Divine Tetrad or Tetragrammaton. The four suits became, by analogy, the four magickal tools, as presented in the teachings of the Golden Dawn.

However, this association of Element with symbolic Tarot Suit and magickal tool produced two different opinions, and therefore, two different occult perspectives or schools. Still, it was the Golden Dawn who simplified the diverse collection of magickal tools, organizing them based on a system proposed by the Tarot. It caused the four suits to become the four symbolic magick tools associated with the Divine Tetrad. This was a new perspective as conceived within the Golden Dawn, and having no prior exemplar.

If we examine the occult writings previous to the Golden Dawn we will find no reference to the elemental association of the four magickal tools. It is not to be found in Agrippa’s classic Occult Philosophy nor in the early 19th century variation called The Magus. It is first discovered in the writings of the late nineteenth and early twentieth century that expounded on the subject of the occultic and Qabbalistic associations of the Tarot. It is here where the association is made between the four elements and the attributes of the four Tarot Suits.

The writings of Eliphas Levi and S. L. Mathers appear to be the first to make this association and then it is further and more solidly made by Papus in his book Tarot of the Bohemians (1896). This idea was either picked up or simultaneously derived and appears at around the same time in the teachings and rituals of the Golden Dawn. An association of the Tarot suits to common playing card suits first appears in a work written by Mathers, but it is poorly contrived and seems to be confusing. However, that association of Suit and Element is rectified and laid out in a constructive fashion by Papus in his later book.

A. E. Waite’s book, the Pictural Guide of the Tarot (1911) does not make this association, but it was well established in another work, the General Book of the Tarot, written by Dr. A. E. Thierens (a renown Dutch astrologer and Theosophist), which was introduced by Waite. In that book the correspondences between Astrology and the Tarot are developed, particularly in regards to the four Suits and the minor Arcana.

Using the Qabbalah or Astrology to determine the elemental attributes of the four suits of the Tarot seems to produce two different sets of associations. Where the Qabbalah is used, the order of elements begins with Fire, then Water, Air and finally, Earth. When one uses Astrology with Theosophic influences, the elements begin with Air, and proceed to Water, Fire, and Earth.

The order of the four Suits of the Tarot does not change, and it begins with Wands or Scepters (Clubs), Cups (Hearts), Swords (Spades) and finally, Coins or Pentacles (Diamonds). The sequence is a hierarchy associated with the four levels of the European social order of nobility, clergy, military (land owners) and merchants (artisans). The element associations for these four suits differs whether Wands are considered to be Fire and Swords are Air, as in the Qabbalistic system, or whether Wands are considered Air and Swords Fire, as in the Astrological system. These two approaches have produced two different sets of associations, and have spawned two different systems of magick, in as far as the four elemental tools of magick are concerned. Both systems are substantiated by symbolic correspondences and either will work quite well. What is required is for the magician to adhere to one or the other, depending on what makes sense and works for the individual.

The four tools have the elemental configuration of the Wand, which is Fire or Air, the Cup or chalice, which is Water, the Sword, which is Air or Fire, and the Pentacle or Dish (paten), which is Earth. All tools that the magician uses to project magickal power are a variation of these four Elemental Tools.
Frater Barrabbas
Posted by Frater.Barrabbas at 10:07 AM