Invocation of the Spirits of the Nephilim part 3 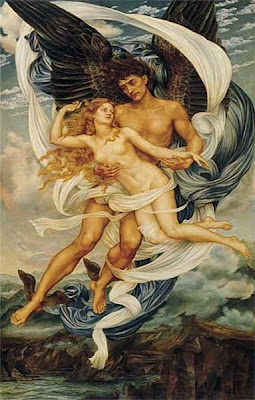 This is part three of a series of articles that will demonstrate the results that I encountered many years ago when I sought to invoke and contact the spirits of the Nephilim, namely the four greater chiefs of that body. I use the term Nephilim to describe the fallen angels of the Sons of God who came down to earth to mate with the “daughters of men” as well as their offspring, who were considered giants (men or women of renown). From these spirits I received a body of lore and a perspective on Enochian magick that is completely unprecedented. I would like to share with my readers some of the lore that I received from these entities and to demonstrate that the Nephilim are indeed highly important to the Enochian system of magick. I will follow up the first article with a second that will reveal the results of the invocation of Ramat’el.

If you are wondering what happened to the invocation of Shemiezez, which would have been the second invocation in this series, I have already posted the results of that working in a previous article. If you haven’t read it or need to refresh your memory, you can find it here.

Notes from the Invocation of Ramat’el

This invocation produced an enormous amount of data, some of it consisting of diagrams and pictures. It was performed on November 22, in the early morning hour of 12:45 AM EST during the planetary hour of Sol. There were no premonitions encountered during this rite, but there were feelings of peacefulness pervading throughout the temple. This working was very intense and experienced on a very deep level. Most of the information that was transmitted to me occurred in the days following the invocation, especially on the following Friday, November 27, just a day before the next invocation. The process of the invocation intruded on my waking thoughts and in my dreams from Sunday on through the week, culminating on Friday afternoon. (Friday was a holiday, since Thursday was the traditional day for Thanksgiving.)


Enochian Mystery Pattern and Other Lore

I heard voices talking to me, and I noted down everything that they said.

“The perenial philosophy is alive. The currents [of magick] are living currents. The [initiatory] lineages are actually egregoric entities in an occult neural network.”

“All systems are living systems [within consciousness], by definition. They are dynamic.”

I was then directed to take a deck of Tarot trumps and to shuffle it for a time, so as to completely radomize it. I then dealt out the cards in the order of the Cycle of Initiation, so that they were in four groups of 5 cards, 6 cards, 5 cards, and finally, 6 cards. This is the pattern that was revealed to me, and it said to be the Enochian Mystery Initiation Cycle.

[It will be necessary to perform a complete analysis of these trump card positions in order to determine the characteristics of the Enochian Initiation Cycle.]

Once the initiation cycle was noted down, the voices continued to instruct me.

A master ritual that formulates the pattern of correspondences that are chosen is known as a Mystikon (for it’s divination potential). It is a magickal machine consisting of a dynamically activated occult [meta]-system. A living occult system that is synthetically created is a magickal machine. The forces that it generates are considered a form of cyber psionics, and the form of the network is called the cyber-psionic matrix.

There are natural correspondences, and these are archetypal and formless symbolic qualities that are qualified through the power of mental association (allegory). Not all combinations produce a living correspondence. Some are unworkable because they are incongruent and don’t represent a unified expression. However, when natural correspondences are qualified in a deliberate and creative manner, then they are considered synthetic. When they are made alive (awakened and realized), then they are synthetic and living systems, hence, cyberpsionicism. Thus all magick, great and small, produces the cyberpsionic effect, but when the correspondences are artfully arranged and expressed through ritual, the resulting process is a magick computer, which is a form of cyberpsionic intelligence that has been synthesized.”

[This section is obviously talking about the nature of magical machines and how they are assembled and used in ritual magick.]

Elements of the Basic Occult Systems (qualifiers and correspondences)

From Chaos to Unity (indicated by a point) - archetypal symbolic world

These systems listed above are active in Astrology, Tarot, Qabalah, Geomancy, Alchemy, and Ritual Magick.

Undefined - Behind unity as the unmanifest is chaos, which is the recursive master pattern for all dynamic consciousness. This is symbolized by the serpent biting its own tail, and also the Möbius strip.

The zodiacal boundaries for the 36 decans are as follows:

A magical machine should consist of the following numeric systems - 4 - 7 - 10 - 12. These are the elements of the mystikon (the divinatory structures of the machine). They way this is to worked is through the use of many sided dice. The following is an example of the kinds of dice that would be used in a magical machine.

The four dimensions of the machine setting would consist of a throw of the many sided dice to determine the zodiacal timing, the Qabalistic structure and the energy. This combination would indicate the potential destiny and mark it for manifestation.

The ritual pattern for the mystikon consists of qualifications of the following elements:

12 point outer circle
7 point or septagram structure with a gateway (4 Angles or Watchtowers and Western Gateway) as inner structure. (Uses 7 invocations of the sephiroth seven rays)

Unified expression: Invocation and key ceremony
Base is 4-fold formula repeated in three other systems (using Temurah cyphers to derive them).

Total of 19 points in the layered periphery - the central point is the 20th point.

The ritual structure consists of a seven-sided pyramid sitting within a double dodecahedron or dodecagon. The center has a gateway and a point of union (for the entire ritual pattern). This is the ritual pattern and structure for the mystikon, which is served by the four systems of divination listed above.

[These rather obscure notes were later used to write up the Mystikon of Lilith ritual working. Another ritual was to be written up for Enoch, but that has not yet occurred.]

The invocation of Ramat’el was begun during the hour of Sol, when the Moon was in the Sign of Libra, two days before New Moon, on Sunday, November 22, 1992. The rite began at 12:45 AM EST, and was completed at 5:15 AM. The exteriorization occurred (via the solar gate) on Wednesday evening, on November 25.