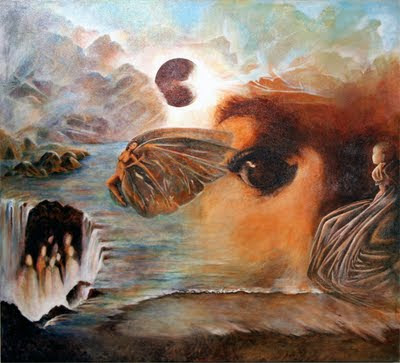 I have often pondered how I got involved with witchcraft, ritual magick and paganism. What was the pivotal event that made me follow the obscure pathways of the occultist, instead of just being like everyone else. How and why was I supposedly different, or, was I even different than anyone else, really? When I was able answer these questions years later and then compare them to the stories that I had heard from other occultic and pagan spiritual seekers, did I see a pattern that we all seem to follow? Keep in mind that I wasn’t able to either reflect on these questions or even answer them intelligently until many years after I had impulsively elected to become a witch and a practitioner of the art of magick. I must say that I did see a pattern, and in fact, I discovered that I had more in common with all esoteric seekers of truth than I was willing to admit in the early years of my practice.

All I could say back then was something to the extent that it was in my blood, that I was somehow uniquely gifted and different than anyone else. Of course, that was my youthful ego talking and not any kind of reasoned and dispassionate analysis. Back then, it seemed like I was fighting a war with over zealous Christians who seemed eager to try and prove me wrong, to bring me back into the fold of the faithful. It was, in reality, an imaginary battle, since few probably really cared what spiritual path I took, so long as I did it quietly and discretely. Of course, being quiet and discrete were not parts of my character, so I went around with a chip on my shoulder, looking for someone to try to knock it off, and a few did try.

Like most recent converts to a cause, I saw the world broken up into two groups: those few who were my allies (other witches and pagans) and those who stood against me (everyone else). I believed that the world was coming to some kind of apocalyptic and climactic struggle, where the witches would rise up and seize their rightful place in the world despite centuries of persecution. I was not content with equality or acceptance in that elevation, since what I really sought was to be superior and better than everyone else, especially those who thought that Christianity was the only spiritual truth. I sought an elitist inversion of the world as it was, and believed that events would miraculously make it all happen.

Ever the pugnacious zealous witch, I aggressively sought out those who tried to paint me as diabolical or evil to confront and argue with them endlessly. I chose to view the world where I was the one with truth on my side, and the Christians, who supposedly persecuted me, were the evil ones. At that time, the entire Christian religion became for me a spiritual practice that was completely hypocritical and filled with evil - Jesus became a devil and Yahweh was Satan. Obviously, following that theme meant that the Serpent in the Garden, Satan and his demonic hoards, and all Biblical adversaries were good, or something like that. It was a decidedly antinomian time for me, and I am certain that it has had some residual effects on me even to this day. Still, it’s a good thing that I did change my attitude and beliefs and became more accepting of all forms of spirituality, especially those, who like me, sought the hidden and unknowable spiritual truths.

So how did I get to this mythic world view, and why did I believe that Christians were my evil adversaries? Why did the mystique of being a witch, with its dark shadowy ways and arcane beliefs and practices (or so I thought) become my passionate preoccupation. I think the simplest answer was that I had felt for some time that I didn’t fit in with my peers, and that I acted differently or strangely towards the obvious mythic tropes in my culture. When I saw horror movies, I vainly rooted for the monsters and the bad guys, and was sorry to see that they were vanquished at the end. I asked too many annoying questions, and in the arena of religion, couldn’t understand that some things were to be taken on faith and not questioned. I was derided and scoffed at by my father, and physically punished when I misbehaved. I seldom seemed to be part of the team or an accepted member of the family. I was a reluctant son who seemed unable to do anything to please my father. Before I reached puberty, I was already deemed a failure and consigned to lower expectations - a true underachiever. These experiences caused me to behave in a fashion where I wasn’t readily accepted by my peers, and that led to a kind of painful rejection. I was weird, clumsy and socially awkward, and not particularly gifted at much of anything. I took everything for granted and didn’t attempt to excel at anything. I often felt gloomy, unhappy, and discontent when it came to my parents, peers and the education system.

Yet I was not inclined to depression, and in fact I was naively optimistic about everything. Things might be bad now, I felt, but they would magically get better, just as soon as the world discovered how great I really was. I lived a separate existence in my imagination, and found within it an escape from the depressing day to day grind that living with my family produced in me. That imagination grew more powerful over time, and within it, I soared to great heights, even though my presence in the waking world was below par at best. All I needed was for something to catch my imagination and ignite my passions, and it would be fueled with an endless supply of imagination. When I was seventeen, I found that thing, but it was something that my father and my peers completely rejected. I discovered that I had a talent for witchcraft and magick! It was the early seventies, and the counter culture was already a well established although decaying force within the youth culture. Outside of my staid peer group at my local high school, I discovered a world where my interests and beliefs had quite a bit of currency. I saw my pathway to being hip, cool and oh-so deep, and impulsively jumped in with both feet!

Publically declaring myself a witch in 1972 was quite problematic. Where before this event I found myself desperately seeking to be accepted by my peers, I was now avidly seeking their rejection. Before this transition I had felt awkward, inadequate and pathetic in every way, now I was a young man of mystery and magick. I felt a final bitter slap of rejection from most of my peer group, and I, in turn, bitterly rejected them and everything that they had represented to me. I now wore black belled sleeve shirts, occult jewelry, fancy belts and boots. My hair was left to grow long, and I stopped attempting to shave, making me into a kind of scruffy innocent. I pretended to be witchy, dark, all-knowing, occultic and even an object of fear for some, since I had no problem with the deceitful gossip that others spread about me - in fact, I helped it along.

Yet the veneer of occult cool hid a core of insecurity, naivety and the fact that I was still sexually a virgin. I pretended to be savvy to the dark side of the spiritual byways, but in fact I was something of a naif and a total innocent. That would, unfortunately, change - I even eagerly and stupidly looked forward to it. I had to grow up sometime, and in fact, as a true slacker, I had put that off as long as I could. My searching and insatiable curiosity would catch up with me, and I would meet a man who, disguised as an enlightened and masterful teacher, would be in fact an arbiter of true evil. To that man and his wife, I lost my innocence, but that story has already been told to my readers. His name was Christopher Syn, also known as Bill Schnoebelen, and he showed me the nature of true evil because I had so desperately wanted to know it. He introduced me to practices and people that did nothing to help me evolve, instead, it showed me the implicit wrongness of things and helped me to know how not to do things or treat people. He burned me with a delusional ego-trip that lasted for four long years, and in the end, my soul was filled with darkness and regret. However, knowing true evil and not completely succumbing to it was a great test for any initiate, since overcoming it will powerfully aid one in the long process of self healing and redemption.

I chose my spiritual path because I felt rejected by my peers, so I rejected them in turn. I sought out the peculiar paths of occultism, witchcraft and magick because I felt that I was different, unique and sensitive to things that others couldn’t sense. Perhaps there was truth in this, but spiritual quests and ultimate service can have multiple paths. I could have become a preacher or a clinical psychologist.

Still, I identified too much with the cultural theme of the adversary, and I guess you could say that it was in my blood. I selected my spiritual path because it was considered by many to be adversarial, antinomian and diabolical. I sought, in a sense, the darkness, because that is where I believed I would find the answers to the mysteries. I was partially correct, but in order to realize the mysteries, one must also return to the light in order to manifest them. In seeking the darkness, I lost my youthful innocence, but I gained the knowledge of good and evil, ethical and moral considerations and above all, self acceptance. I ironically started in one place, and ended in exactly the opposite. That is the nature of the cycle of transformation and ascension.

Is my life’s path similar to other occultists? I believe that my life has been like many others who have also sought hidden spiritual truths, defying the warnings, disbelief and fear from those who espouse the cultural norm. It doesn’t matter what I believe or what religion I follow, all true seekers are united, both in their purpose and in the goal that they finally achieve.
Frater Barrabbas
Posted by Frater.Barrabbas at 3:21 PM