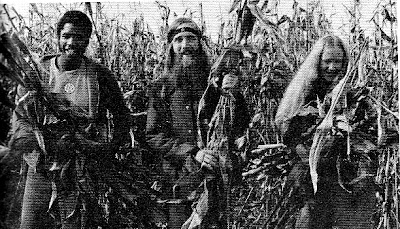 (Lugh, with Jim Alan and De-anna Alba - late 70's)
Lately, I have been reminiscing about old friends, some of whom I have lost contact with over the years, and one of those old friends who I had known for a long time was named Lugh McGhee. I really cherished and enjoyed his friendship and we had many crazy adventures together. I truly respected this man, but now he’s not amongst those who I have contact with on a regular basis, and I find myself wondering what he is doing and what his life is like today. You see, ever since I moved from Atlanta to Minneapolis, I lost touch with him. He is living somewhere in Miami, having become a Babalawo in Santeria and is likely running his own church, but I am also sure that Lugh has more than one iron in fire since that’s the way he has always been.

Lugh was born the same year that I was born, so we are of the same age and generation. He grew up in Milwaukee, and I grew up in Racine. I was born a Capricorn, and he was born a Cancer, so I was technically six months his senior, but none of that ever mattered. We were very different individuals following our requisite spiritual paths, but those paths had a habit of intersecting at moments when we would find ourselves interested in exactly the same things. At those moments of intersection, we would work together on various projects of interest or share lore that we had developed or discovered. Other times we would move apart and follow our own distinct paths. Lugh was a kind, passionate and a very outgoing sort of man. He was an African American, but that never seemed to deter him from involving himself in whatever group or activity he found interesting. He was well spoken, educated, and full of street smarts, too. For Lugh, race was not a reason to ponder either social or economic inequalities, he functioned as if race was not even a consideration. Even when he chose to engage with his ethnic heritage and the African Religious Traditions, he did so as a matter of course. Whatever interested him, he would faithfully follow that path until it could teach him nothing more.

I first met Lugh back in the late 1970's, when he was one of the founding members of Circle. At that time there were just four members who formed the core of that group. Those four individuals were Selina Fox, Jim Alan, Lugh McGhee an De-anna Alba. So, Circle originally consisted of just these two couples, even though now it has grown to become a huge organization. How Lugh got together with these people and how they founded Circle is another tale, ostensibly to be told by Lugh himself, since I am unable today to remember that particular story. I do remember the Circle group giving a talk at Sanctum Regnum in Milwaukee on the Qabbalah, which I and another member of my Coven from Hell attended. We wanted to see how much this group really knew about that subject. Needless to say, I found the presentation to be woefully inadequate, and as a typical egotistical snob, made the main presenter’s task quite difficult - that presenter was Lugh. I am certain that he saw me then as quite the prick, even though I tried to mollify what I had done afterwards. I didn’t see Lugh again until both he and I had already left our respective groups, way back in the summer of 1980 at the unforgettable Pan Pagan Festival held in northern Indiana. At that event we reconnected and found that we really had a lot in common with each other, and decided from that point on to stay in touch. We specifically met at the impromptu Crowley Rap Session that Lugh had hastily put together, but considering the number of attendees and the fruit of those discussions, it was a successful venture.

After the Pan Pagan gathering, Lugh and I began to periodically visit each other. Mostly, I would travel to Madison to see him where he lived. Lugh was no longer living on the Circle farm and had distanced himself from its members. He still considered himself friends to Selina and Jim, but was now actively pursuing the more hardcore occult studies and ceremonial magick that were his passion. We would get together and experiment with some of the new lore that I was developing, and he would throw out some of his own creative ideas as well. I also sponsored Lugh to receive an initiation into the Alexandrian tradition of witchcraft. I introduced him to my friends in Milwaukee, and found that he already knew some of them. It was the best of times and it was also was the worst of times, at least for me. Since having graduated from college, I was now expected to start a career, something that took a few troubling years in the early eighties to finally achieve. Luckily, my friends helped to get through this time, and Lugh was one of those friends.

When I got a job opportunity and moved to Kansas City, we lost touch for a while, but then got reconnected. As one of the sponsors of the Heartland Pagan Festival in ‘86, I invited Lugh down to give a workshop on sex magick. He was so well received (and things weren’t going so well in Madison) that Lugh decided to permanently move to Kansas City. I got him a place to live and a roommate, and he went to work to form his own group.

Lugh was a very pagan man and had absolutely no qualms about his sexuality - it was a very natural part of him. However, Lugh also had a dark side, as we all do, and it manifested in some of his relationships with women. Typically, it was Lugh’s relationships with women which were a great source of trouble and difficulty for him. He had no problems attracting women to his fiery passion and amiable charms, but where problems occurred was during the attempt to build a long term relationship. It took Lugh many years to finally to come to grips with himself and learn to deal equitably with the woman that he was so entangled. He basically had a good heart and well meaning intentions, but it couldn’t help him with the complicated interactions of a long term relationship. This, I might add, is a problem that haunts many heterosexual men.

Lugh was also quite able to take care of himself if any kind of trouble came his way. He had some knowledge and experience with the martial arts. He also knew how to street fight, and being a little over six feet tall with a robust frame (kind of like the “Mr. T.” of the pagan community), he could be quite intimidating. Lugh was not afraid of speaking his mind, either, which sometimes gave people the wrong impression about him. He was actually a peace loving man, but sometimes idiots would seek to challenge him just for the sake of showing everyone how tough they were. Those challenges would often lead to unforgivable encounters, although Lugh made certain that he didn’t leave behind any enemies, it was sometimes unavoidable.

Some of Lugh’s most famous quips, which are firmly lodged in my memory, were often meant as humor, although not everyone found them funny. As for me, I never clashed with Lugh, so I found his anecdotes to be hilarious.

Here’s a few of them.

“Be someone, or be someone’s zombie!” - taken from a quip associated with Mr. T.

“I don’t mess around with putting a spell on someone and then hoping it works. If I want to hurt someone, I go to his door, knock on it, and then cold cock the sucker when he answers it.”

“If you continue to do that, I will have to hurt you - this is just a friendly warning.”

For a while, whatever occult system I managed to get involved with, Lugh found a way to get involved with it, too. He wasn’t copying me or even attempting to compete. We were just following a very similar path. Not long after I was consecrated a bishop by my close friend and associate (who had been consecrated by Bill Schnoebelen), Lugh connected with Michael Bertiaux and got consecrated a bishop by his hand. However, Lugh is the only person I knew who was able to get initiations, an ordination and a consecration from Bertiuax without also giving himself up to Michael’s more decadent interests. I believe that Lugh told me that he had to let Bertiaux know that any kind of foolishness of that kind would be quickly retaliated with an actual physical repulsion. For whatever reason, Michael was completely straightforward with Lugh, although it was likely due to a very realistic threat, one that Lugh would have had no compunction in executing.

When Kansas City could no longer satisfy Lugh’s needs or requirements for new teachings, he left and moved on to Miami. Lugh had previously made contact with a leader in the Santeria community and found that there was a real home for his complicated spiritual and magickal beliefs and practices, so I wasn’t surprised when he left. We stayed in contact for some years after that, and he even visited me when I lived in Tallahassee. However, our paths had become quite different and our phone calls and emails became less frequent.

Lugh had worn many occult hats during his many years of study and practice, and probably still does. He was a pagan, an Alexandrian witch, a Thelemite (although never a member of the O.T.O.), a ceremonial and ritual magician, Gnostic Bishop, and a practitioner of Hoodoo, various root workings and African magickal methodologies, as well as an initiate and priest in Santeria. He certainly had other initiations, but I would prefer Lugh to tell the tale of those events rather than me.

In the present time, I haven’t heard from Lugh since around 2004, so it’s been seven years since we last made contact. I am hoping that he still trawls the internet and maybe he will read this article. If so, I invite him to contact me. I would love it if he would deem someday to tell his life’s story - it is a most interesting and fascinating one. (I would even seek to help him write that story, since I feel that it’s a very important one, too.) I am also glad that I was able to play no small part in that story, at least during his formative period.
Frater Barrabbas
Posted by Frater.Barrabbas at 8:00 AM