Coming Attractions and Other News 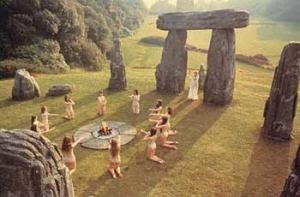 “Summer is a cumin in, loud we sing cuckoo!” - and Happy Beltain to one and all!

It’s been a beastly winter up here in the tundra of Paganistan, and now that the climate is once again returning to milder weather, fostering the greening of the earth, I thought that I would look at what has been accomplished in the last nine months of this blog. There are some changes coming to it, due mostly to other work constraints that I am experiencing, so my entries will be smaller, less substantive but no less frequent.

I have had a really great run, but after nearly two hundred articles, and most of them quite long and detailed, I feel that I need to place my focus on other things. I may also, from time to time, acquaint some of my newer readers with some previous topical threads already found in this blog, often which can answer questions or serve to respond to issues discussed on the blogosphere.

What I need and want to do now is to complete some large project based articles on the Qabbalah, Lunar Magick, and the Lunar Mysteries, which will be presented in parts on this blog in the coming months. I will judiciously sprinkle these articles in with the normal and shorter articles that I will write. I also have some interesting and unpublished articles on reincarnation, New Age as a Cargo Cult, the nature of Pagan Festivals, and several others. These articles will revamped and serialized, since they are a bit large for a single posting.

Most blog articles are around 300 to 400 words, and mine have been in the area of 4,000 words or more. Some folks may have enjoyed how loquacious and revealing I have been in the past, but others will have found it a chore to read through all of this rather turgid prose. My future intention is to produce shorter articles, and to break up larger articles into segment parts, which I will post at various times (and not all at once). My goal is to continue to produce on average eight articles per month, and that will continue.

OK, so now that I have made that rather inglorious announcement, what is driving this insidious diminishment? The forces driving my decision also leads me to make some announcements for some of the future projects that I am presently working on. As I have already indicated, my regular day job is going to be requiring a lot more of my time than it previously has, extending beyond the typical eight hour day regimen. As for large scale writing projects, I have several that I will likely be able to realize this year, although it may take more time to get them into print. Since I want to focus on these other tasks, I must reduce the time and effort that I have been putting into my blog articles.

One thing that I am particularly happy about is that I have very recently signed a contract with Llewellyn to write a beginner’s book on the Qabbalah, however it may be some time before the final printed book becomes available. I have to write up the manuscript first, and then go through a year long period of copy editing, galley scrutinizing and engaging with a real marketing group. Some may think that I am selling out by writing a book for Llewellyn, but I don’t really believe that’s true. For one thing, having a book published through Llewellyn can’t but help to market the rest of the books that I am attempting to sell. That also includes the independent endeavors that I will be putting together this year - books that Llewellyn wouldn’t be interested in publishing for various business reasons. This might be the beginning of a more engaging business relationship with them, or it might be just this single project that gets printed. It’s even possible that this project might get the “axe” for various business related reasons - but for now, I believe that if it succeeds, it will help to market the “Frater Barrabbas” brand, and that will benefit everyone.

Some of the other book projects that I am working on that I hope to see completed some time this year or early the following year can be found in the following list. I am very optimistic, but who knows what will happen between now and then.

1. Introduction to Ritual Magick for Witches and Pagans - this book is slated to be my first “indie” publication. Right now, the manuscript is nearly three quarters completed.

2. Abramelin Lunar Ordeal - since I am nearly finished with this ordeal, I am thinking about bundling all of the writings that I have produced on this subject, along with the rituals, and assembling them together into a book.

3. Grimoire Armadel Ordeal - because I was finally able to determine how to activate and use this grimoire, I have decided to assemble all of the pertinent writings and produce an operational grimoire ordeal. I am still working on this project, and it will need some time to be fully realized.

Then, there is the Order of the Gnostic Star trilogy, which seeks to package the training documents and rituals of the E.S.S.G. - these projects are in various stages of completion, and will need more time to complete them.

4. Temple Rites for the Order of the Gnostic Star - this is an introduction to the Order, it’s Bylaws, organization, practices, degree system, grimoire ritual listing and the basic temple rituals needed to organize and run an autonomous temple of the E.S.S.G.

5. Art of Elemental and Talismanic Magick - still assembling materials, although the rituals have been around for quite some time.

6. Art of Ritual Evocation - as I continue to write articles for this book, the scope continues to grow. This will be a completely inclusive book for the magician who wishes to perform theurgy and evocation using the system developed by the Order of the Gnostic Star.

This is quite a large list, as you can see, and represents quite a commitment of time and effort. In addition to the above list of non-fiction projects, I am also going to attempt to write my first trilogy in the occult-horror fiction genre. I have been puttering around with the plot and story line for the series involving Duncan Sinclair, Vampire Hunter, which is my attempt at writing a vampire story in the same vein as a Hammer Production film (no pun intended). I admit that I have been remiss in working on this project at all, but the story is very much alive in my head and demanding to be manifested in the form of a manuscript.
I have decided that all of my future fiction writings (and I have a lot of stories in my head) will be published as “indies” instead of seeking a publisher. My role model (and personal hero) for these endeavors is Stephanie Connolly Reisner, who continues to inspire my passion for writing fiction.

Other projects that I am considering are building up a series of Powerpoint presentations for workshops that will teach my methodologies in mastering the art of ritual magick, from simple spell work all the way to theurgy and goetic evocation. I believe that building up this repertoire is something that I feel very inspired to do, and it’s been one of my spiritual objectives since I first started my magickal career. I would also like to form a magickal group of practitioners in my home town area as well as sponsor the inauguration of groups and affiliates around the country. As you can see, I have a lot on my plate, certainly enough to keep me busy for the next several years!

Besides all of the above tasks, both large and small, I want to spend some time in my garden, continue building up my grove and perform some new ritual workings in it during the balmy summer months. I would like to do some hiking, swimming, camping and kayaking, as well as getting out more and going into town to meet with friends, socialize and eat some exotic foods. I have been stuck in my house most of the winter and I have become a bit stir crazy, so now that the summer is coming, I want to be outside a lot more. I really missed not being able to be outdoors, so I intend to make up for missed opportunities. After all, pagans belong in nature, and nature is anywhere outside of the house!

As the summer comes gently sliding into our lives, may you find great pleasure in the wondrous outdoors and the blessings of the gods and goddesses of the land, waters, sky and even below the earth.
Frater Barrabbas
Posted by Frater.Barrabbas at 8:00 AM