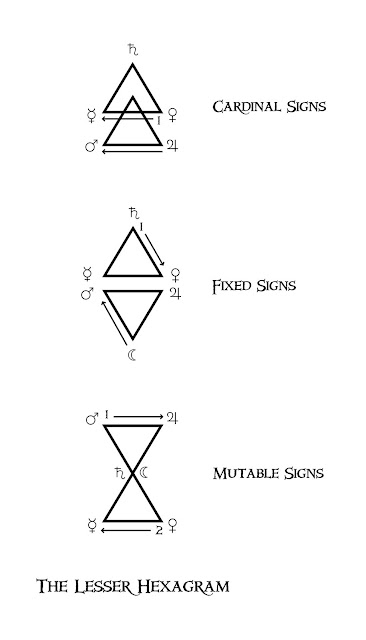 As you may know from my previous blog articles, I was too dim to figure out how to work planetary magick in the traditional Golden Dawn manner, so I had to invent something completely different to accomplish that end. Since I had departed quite a bit from the tradition, that left me with a conundrum to figure out - namely, how to work magick using zodiacal elements.

Let’s briefly review how I work planetary magick. It’s really simple, and it’s based on using a septagram trigon. I constructed a rectangular piece of plywood into a talismanic device with a septagram painted on it, and after charging and consecrating it, I would employ it to draw the invoking angles for a specific planet. The septagram talisman is placed in the center of the circle after an inner circle is erected in the magickal circle proper. The actual details of how this is worked can be found in my previous article, which is located here. Using this device, I had the option of using an outer invoking vortex to assist me in invoking just a planetary intelligence, or I could generate an outer element vortex, which would assist me in generating and invoking a talismanic elemental. I could also summon one of the Enochian seniors as well as employ the use of one of the Lunar Mansions.

So using the septagram (instead of the superior hexagram) allowed me to build a magickal repertoire that allowed me to work magick using the seven planets. However, I faced a more difficult task when I attempted to address the problem of working zodiacal magick. Since I had gone so far off of the beaten track, I would have to invent something completely new (or adapt something that was already being used) in order to continue to build my magickal system. I wanted to continue to use some kind of device, but I didn’t want to have to use a trigon with a duodecagram painted on it. I just wanted to come with a simple solution, and use what was already being used, although I would have to use it in a manner that might break the rules.

In addition to failing to figure out how to work with the superior hexagram ritual for doing planetary magick, I also couldn’t figure out how or even why to use the lesser hexagram ritual, but I was intrigued by the three devices that employed double triangles that were offset from each other. The fourth triangle device of this set was just a hexagram, but the other three were offset with parallel bases, touching apexes and where one triangle was penetrating the base of the other with its point. These three triangle devices were very interesting to me, and possibly useful if I wanted to use them in a manner quite different than what they were used for in the lesser hexagram ritual. Anyway, let’s put these three devices aside for a moment and look at what specifically defines an astrological sign.

If I consult the matrix of symbolic elements that define an astrological sign, I will come up with three essential qualities. These qualities consist of the base element, the quadrant house or modality, and the ruling planet. The base element consists of one of the four elements, and that can be easily expressed by the device of the invoking pentagram. The quadrant house or modality are expressed as groupings of three, such as angular, succedent and cadent for the quadrant houses, and cardinal, fixed and mutable for the modality. The ruling planet would be defined by an invoking septagram; but a corresponding device used to define the quadrant house or modality would be the three devices of the lesser hexagram. Applying these triplicities to the three devices of the lesser hexagram that don’t form a true hexagram would seem to solve the problem of how to define through a matrix the nature and quality of a sign. Keep in mind that I associate signs with the houses, which is a modern astrological adaptation. So now that we have the three devices, how would they be deployed together to formulate and generate an astrological sign.

Now we need to consider what would be required to actually formulate a ritual structure to invoke a zodiacal sign. Since the base element and the lesser hexagram structure should be joined into a single expression, I discovered that a pylon ritual device would work quite well. I would set an invoking pentagram for a specific element to the base of the pylon, and the corresponding lesser hexagram device at the apex. These two points would be drawn together into an elongated invoking spiral, thus creating the ritual device of the pylon. If four of these pylons are set to the four watchtowers and drawn together to form a magick square within a circle, then the outer energy vortex field required for the astrological sign would be established. I would then erect another vortex using the rose ankh device, and set it to the four angles and the ultra-point, drawing them together and fashioning an invoking vortex. Then I could draw a center circle, place within it the septagram talisman device, charge it, and then proceed to invoke the ruling planet. Once these elements are generated and established in the empowered magick circle, I could summon the archangel of the astrological sign.

Being able to establish the astrological matrix of a specific sign is important if other aspects of the zodiac are going to be incorporated into the magickal working. These other aspects would be the astrological decans and their associated spiritual correspondences, and the astrological quinarians, which would allow for the invocation of the 72 ha-Shem angels or the Goetic Demons. As you can see, this combination of elements makes for nice and efficient magickal system, and causes planetary magick and zodiacal magick to be tightly related.

Of course, I was not able to come up with these ideas right away, and in fact, I had to think about it and experiment for awhile before I was able to determine the final form. However, what I did discover is that the system of magick that I had invented seemed to be quite capable of being modified and extended to perform any number of different kinds of operations. I did indeed break some rules, but that only applies to traditional Golden Dawn magick, and I had passed out of that tradition rather early in my attempt to forge a system of magick that was useful and relevant to a witch who was practicing ritual magick.
Frater Barrabbas
Posted by Frater.Barrabbas at 10:42 AM