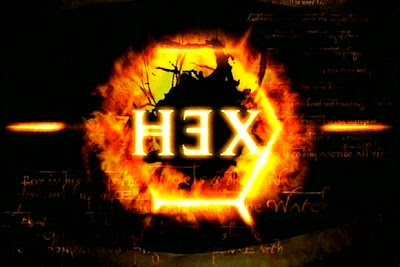 I was recently watching a British TV show that was produced several years ago, called “Hex,” about an insular young woman who lives at a boarding school and has problems fitting in with her peers. The reason, of course, turns out to be because she is actually a hereditary witch who is beginning to realize her powers while being haunted by her family’s distant past as wealthy slave traders.
Throw a bit of voodoo, a spirit bottle, supernatural happenings, and the menacing presence of a fallen angel named Azazael (supposedly one of the Nephilim), spice it up with youthful sexuality, sexual tensions, implied lesbianism, an incredible location (Englefield House), snappy occult graphics, and supposedly you will have a compelling TV drama, right? Wrong! Maybe this show intrigued an unsophisticated audience for a little while, but since it only lasted two short seasons, it was flawed with all sorts of implausibilities and a truly bad plot and story line. Beyond the first episode, I found the whole series to be contrived and unbelievable. The writers attempted to produce a haunting TV series full of youthful angst, dark desires for empowerment, revenge, regret and lost innocence; but instead it was boring and pretentious.

Watching just four episodes made me regret selecting it from Netflix and wasting my money. It seemed so promising, yet it was such a disappointment to me. Now I consider myself, as an experienced occultist, a pretty sophisticated audience. If I watch an occult flick and I like it, then it might appeal to more general audiences, or at least, it will seem plausible and even sophisticated. It’s just a fictional piece, after all, but despite that, it should seem real and compelling, unless the writers are attempting to make it into a dark comedy.

Unfortunately, the writers of this melodrama were attempting to produce something that was realistic, but they failed utterly after the first episode. The graphics were slick and interesting, the music trendy and edgy (by the group “Garbage”), and the special effects were so-so, but still the story just really sucked! I also thought that the writers didn’t do much research into the topics that were working with. The ghosts seemed not very ghostly (especially Cassie’s dead friend, Thelma), the fallen angel didn’t look like a fallen angel. After all, the Nephilim are not actually considered demons, so they wouldn’t appear as such (horns and wings), if they could appear to humans at all without a very serious evocation being performed.

I think the other reason that this series failed (and why many others bomb as well) is that the writers for this program have never undergone any kind of spiritual transformation, or for that matter, any kind of transcendental or supernatural experience. They have no clue what it’s about, so they fail to communicate that to their audience. I have also found this to be true of a lot of other supernatural flicks; they are just unbelievable, and so they aren’t even mildly entertaining.

The main character of this series is an introverted but dishy young woman named Cassandra “Cassie” Hughes. She discovers an iron spirit bottle hidden behind the wooden floor molding in a deserted store room that used to be the slave quarters of an 18th century country estate. Of course, she cuts her finger on the bottle’s iron stand and a drop of her blood drips into it, which one would assume creates some kind of empowering bond with the magick hidden in that bottle. The iron spirit bottle has vevers engraved on it (of course) and there are the themes of forbidden voodoo rites being reawakened after a two century hiatus. That awakening gives Cassie strange new powers and abilities, which appear to mildly frighten as well as intrigue her.

Now all that seems to be somewhat plausible, and particularly since the original mistress of the estate had a slave lover and appeared to be engaged with the religious practices of her husband’s slaves. (I will not comment on some of the historical absurdities associated with the plot, since it would be much more interesting if it took place in New Orleans instead of the English countryside.) Yet it would seem that Cassie has unwittingly connected with past magickal practices and rites, and her blood offering has reawakened those powers, which she now is beginning to possess. After the first episode, you get the impression that you can buy the story, since it seems somewhat plausible. Cassie is starting to undergo some interesting changes, and this is at least attractive enough to watch it develop in the next episode.

In the very next episode, Cassie discovers that behind the voodoo rites and magick of the old estate, there is a spirit who appears to have been behind everything that went on. The original mistress of the estate had slowly gone insane, her young daughter was found dead and hanging by the neck from a large oak tree, and orchestrating it all from behind the scenes was the fallen angel, Azazael.

OK, we went from African religious and magickal practices in the mid 18th century in Britain, then suddenly we are shown the source of all of these rites and supernatural powers in the appearance of one of the angelic spirits of the Nephilim. Even that trope, as jarring and out of context it is, could be accepted as part of the story if weren’t for one simple thing. As Cassie discovers some of these underlying clues, begins to exercise her newly gained supernatural powers, and then is forced to witness the death and supposed sacrifice of her only friend and roommate, she seems to hardly change at all. She has moments of mild terror, confusion, regret and revulsion, but overall, she is pretty much unaffected by what is happening to her. In fact she seems lost inside of herself, staring vacuously at the lovely countryside, to the accompaniment of subtle mysterious piano music and actionless scenes that seem to add little to the plot. She goes through the motions of experiencing things that would normally, completely and profoundly change anyone to the very core of their being in such a bland, banal and mundane manner that I felt like throwing an empty soda can at the TV screen.

The problem with that TV show isn’t the actress (Christina Cole) playing Cassie or the supporting cast, the location, sets, or even the production crew. What’s wrong with this show is the crappy script and pathetic plot! The writers of this series just don’t understand any of the actual ramifications of what is happening to their heroine and main character, so they can’t communicate what’s really going on inside of her head. The director is also clueless, since he doesn’t inspire the actress playing Cassie to act like a female version of Jack Nicholson playing the character Jack Torrance in “The Shining.” Even something a bit like that kind of outward change would have been more believable than bland, blonde, boring, and inhibited Cassie Hughes. At least Stanley Kubrick understood what it meant when a character goes through a radical change.

What this means to me, and here we will get to the crux of this article, is that much of the public and even the creative film making community have forgotten the real elements of a powerful and internal transformation. This is also an important concept for pagans, witches and occultists in general to understand. So what is a transformation? How do you know if you have undergone one?

If I have to describe it to someone, then it’s likely that they probably have never been impacted in such a manner. Then again, such a thing might happen to someone and not be recognized as a transformation, but it would never be unremarked or forgotten!

Here are some points that I think would indicate that someone has undergone a real transformation. This list isn’t complete or inexhaustive, but it should give you an idea of what a transformation really is like. Transformation is, in a word, a powerful and permanent change accompanied with a lot of emotional trauma! There are also positive transformations, and negative, or regressive, transformations. Cassie would have been undergoing a negative transformation, if the main theme of the show was her unredeemable fall from grace.

1. Changes are felt on all levels, they are disruptive, wholly compelling and seem to challenge the very fabric of one’s identity or what one might consider to be “real.” They are, in word, earth shaking.

2.  Borders between reality and fantasy become transparent, allowing for waking dreams, visions, or even hallucinations. One seems to be able to see into and experience the unseen (spirit) world without any assistance or outside help. One hears, senses and sees things that other people cannot sense, see or hear.

3. Usually triggered by a life threatening challenge, disease, death of a loved one, or extreme trauma caused by some kind of personal catastrophe, whether inner or outer. It often requires the person undergoing it to assume a complete change in values, attitudes and beliefs.

4. Even a positive transcendental transformation can completely disrupt a person’s life, changing everything, from friends, relationships, job, vocation or life path to even how one dresses and looks. A negative or regressive transformation does the same, but the changes that it produces are decidedly maladaptive.

5. A regressive transformation is the beginning and onset of a complete psychological collapse, yet a positive transformation can appear to be as difficult and catastrophic, but the one undergoing it seems to be buoyant and in some kind of control.

6. A negative transformation is where a nominally good person becomes decidedly evil, and a positive transformation is where a supposedly neutral person becomes a great force for good. In both cases, the person undergoing it seems to be struggling with archetypal forces of darkness and light, but the outcomes are starkly opposite. The changes witnessed in the transformed person by outsiders in either case are dramatic and obvious.

9. Enlightenment usually requires a number of strategic transformations occurring over a long period of time; but madness only requires one massive change that triggers the fall, and even if they recover, it seems to haunt the person who underwent it for a lifetime.

These points above are, of course, just my opinion about the differences between a positive and a regressive or negative transformation. I am certain that there are a lot of different opinions on this topic. However, I think that we can all agree that the TV show “Hex” certainly could have used some of these points when they were building up their plot. I know that I will certainly keep them in mind when I get around to writing my own fictional stories.
Frater Barrabbas
Posted by Frater.Barrabbas at 8:00 AM